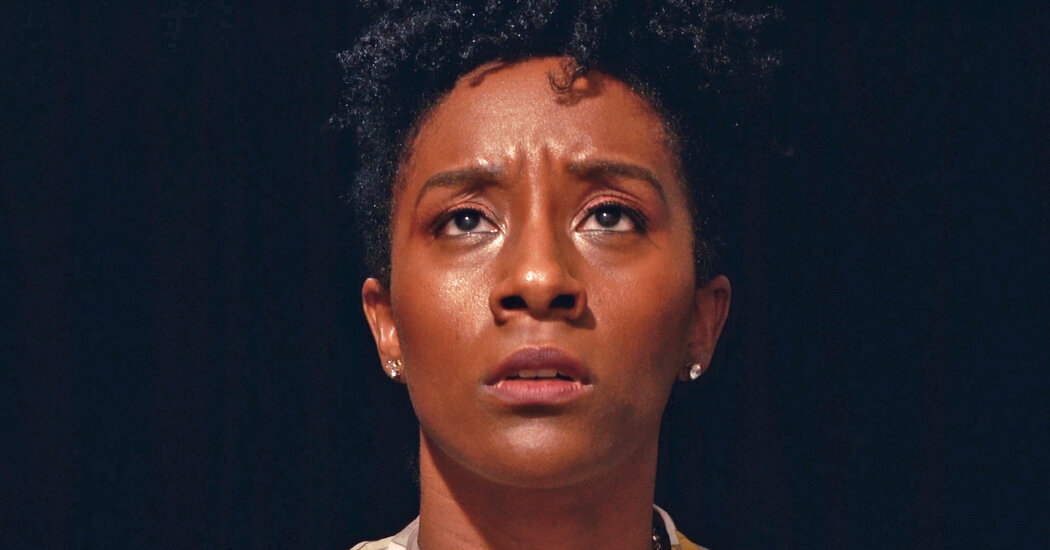 That transfixing moment from Sunday’s televised interview between the Queen of Empathy and the Duchess of Sussex rang in my ears as I watched, on Monday, a new play, by Vivian J.O. Barnes, that explores the same question in 32 minutes instead of two hours. With uncanny timing and daring theatricality, “Duchess! Duchess! Duchess!” — now streaming from the Steppenwolf Theater Company in Chicago — dissects the phenomenon of Black women who, in exchange for privilege, forfeit their ability to speak, or have it taken from them.

I don’t mean Winfrey, of course. In Barnes’s play, which she started writing in 2018, the interview is rather between a woman called the Soon-to-Be Duchess, who is like Markle shortly before her 2019 wedding to Prince Harry, and a woman called the Duchess, a Kate Middleton figure reimagined as Black. The occasion is a meeting, evidently arranged by palace apparatchiks, in which the experienced royal wife is supposed to school the totally inexperienced royal fiancée in the finer points of duchessing: how to hold one’s legs (“the Duchess slant”) and especially how to hold one’s tongue. 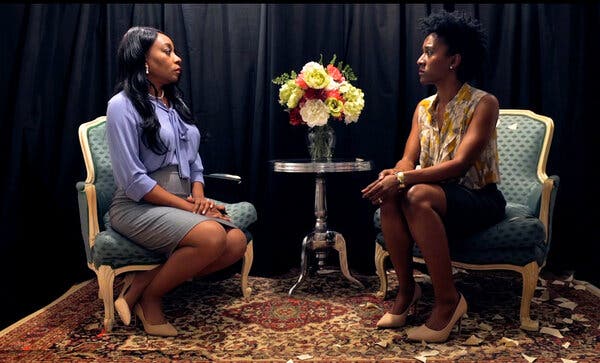 By making the Middleton figure Black, Barnes both generalizes the problems of royalty to encompass any woman who joins “the firm” and stakes a claim on particular themes without having to spell them out. The Duchess (Sydney Charles) is sleek and sophisticated, with straight hair, silky diction and a profound mastery of self-abnegation. Soon-to-Be (Celeste M. Cooper) is less processed in every way: She shows too much skin, says what she thinks and has condoms in her purse.

Still, she’s jittery. At night she dreams of her mouth turning into a hand that waves as if to perpetual crowds. She has already been pilloried in racist terms in the press and, even within the palace, has been advised to tone herself down. One internal memo asks that she try to be “a little less cocoa, a lot more beige” — a line that, though written earlier, recalls Markle’s description of royal family members expressing concern about the skin tone of the children she and Harry might have.

Unlike them, Soon-to-Be laughs off the matter, tearing the memo to pieces along with many others. But if she expected to find the Duchess a comforting sister, “one person who gets it, who’s gonna look out for me,” she is as mistaken as Markle apparently was in the parallel situation.

There is no solidarity to be found in a hollowed-out personality; the Duchess, who has recently had a baby she can’t quite recall giving birth to, imagines her public self as a “person who’s taking up the me-shaped hole I left behind.” She has bought so deeply into the royal mythology that she seems to believe she now exists in a rarefied world beyond personality and thus beyond race.

As the Markle interview made clear, no such world exists. Institutions can be racist even when their leaders (as Markle said of Queen Elizabeth) have “always been wonderful.” Because this can only be seen from outside, it is not the assimilated royal in Barnes’s play who ends up teaching the outsider how to speak, but the reverse. In ways that are both fascinating and intensely disturbing, Soon-to-Be takes both women to places they could not reach in real life.

This puts “Duchess! Duchess! Duchess!” in the line of recent movies, including “Get Out,” “Us” and “Antebellum,” that figure racism as a species of horror, complete with surrealistic touches, eerie mash-ups of sounds and music (by Pornchanok Kanchanabanca) and a culminating dose of (implied) nazaran. Yet it is still recognizably a play: The director, Weyni Mengesha, stages it elegantly on a minimal set, against a black backdrop, with just enough editing to stitch the two characters, who were filmed separately, together.

Even aside from creating mini-studios in their own apartments, the cast has a difficult job here. Working hard to split the genre difference, they aim for a performance style that is neither too stagy for sinema nor too subtle for theater. Charles has an easier time of it; Barnes has given the Duchess a clear dramatic profile with a rising arc of crisis. Cooper’s role is rangier and harder to corral: Soon-to-Be toggles so fast between nerves and nerve that she starts to seem like a firefly.

That’s a trap built into the setup: Someone has to keep goading the action when the primary antagonists are deliberately kept offstage. Another trap is that horror can lend those absent antagonists a kind of otherworldly glamour; why were the Duchess and Soon-to-Be — or Markle and Middleton, for that matter — attracted to royals in the first place?

Yet as Markle reminded us, racism isn’t glamorous, even when it wears a tiara. It’s ordinary and sour.

If “Duchess! Duchess! Duchess!” can’t strike that note clearly, it strikes plenty of others. The obtuseness of privilege — and the mania that aims to preserve it with absurd rituals and at unimaginable emotional cost — get a thorough workout, even in such a short play. The writing itself is wonderfully operatic; you could almost imagine the script as a libretto. No surprise that among Barnes’s inspirations are such musical stage stylists as Ntozake Shange, Caryl Churchill and George C. Wolfe.

Beyond that, it’s no small thing to find a young playwright — Barnes is still in graduate school, at the University of California, San Diego — using the theater’s big tools so presciently and fearlessly. She’s got a voice, and she knows it.