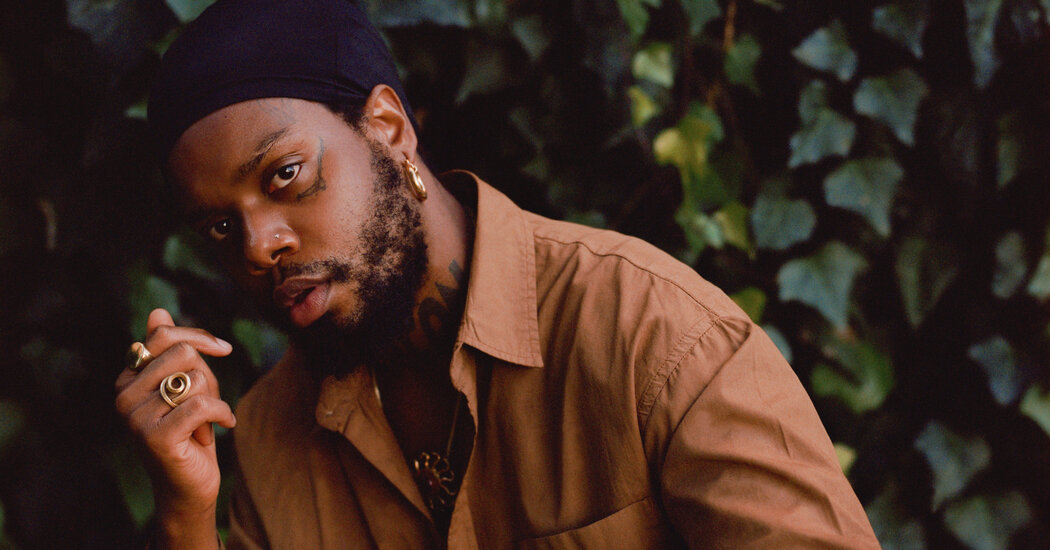 The singer and songwriter serpentwithfeet’s 2018 debut album, “Soil,” mingled heartbreak, desperate longing and a search for solace. But he chose pleasure over angst for his second album, “Deacon,” which is filled with songs that savor flirtation, romance, sex and lifelong connection. “I celebrate that I can love and that I’ve been loved,” serpentwithfeet said about the album, due March 26. “And I get to be as jubilant as I want to be.”

In a görüntü chat from his home in Los Angeles, he wore a T-shirt with “Kingston” in big letters over a cartoon sun, along with a sunburst medallion. The same medallion appears on the album’s cover photo, which shows serpentwithfeet embracing another Black man. Both of them are dressed in white, as if for a ritual or a celestial ascension.

As a Black gay man who grew up in a deeply religious family, serpentwithfeet, now 32, grappled with self-doubt and spirituality alongside love and desire on “Soil” and on his 2016 EP, “Blisters.” “A lot of what I’ve explored in my work is trying to figure out how I can legitimize myself, how I can validate my feelings,” he said, “and that hasn’t always been easy.”

His music draws in very individual ways on R&B and the gospel music he grew up singing in a Pentecostal church: “I know church music better than anything else. That will always be my natural cadence.”

Yet his songwriting was also shaped by the classical choral music he performed in high school with the Baltimore City College Choir, an award-winning group that competed internationally. “It made me clear about how I wanted to take up space musically,” he recalled. “It was just brilliant to be 14 years old and to have a Black choral director who was like, ‘OK, we’re going to understand classical music. But you’re also going to understand the value and the importance of Black composers and Black people and Black opera singers.’ And we had to sight-read and do our solfège, and to know how to do transcribing and musical notation — all that stuff.”

The music serpentwithfeet makes is immediately distinctive, harnessing his gospel and classical training to a startling emotional openness. He works largely as a one-man studio band, fusing his own vocals, instruments and electronics. And he creates songs that are rhapsodic, pensive, harmonically complex, meticulously orchestrated and, often, constructed with layer upon layer of otherworldly vocals.

His phantom chorales, he said, are a way of looking beyond himself.“I think about the idea of the operatic chorus, or the village chorus, where I have my limited perspective and then the chorus has the omniscient perspective,” he said. “I’m thinking about a community when I’m making songs. And I’m thinking about me being the younger person in the community. And then there’s the elders, or the village people, who can see more than what I can see.”

Nao, an English R&B songwriter, exchanged collaborations with serpentwithfeet. After they wrote a song for her next album, she added her voice and writing — working remotely, largely by exchanging WhatsApp messages — to “Heart Storm,” a shimmering ballad on “Deacon” that envisions love as a deluge.

“He had already created this template, and this really beautiful world. I just had to work my way inside of it,” Nao said from London. “He doesn’t songwrite the linear way that I do. He starts from obscure places, with these poetic sequences I just would never think of. I write the way I speak in a conversation. And he writes like he’s Shakespeare. I’d say he’s the Shakespeare of alternative Black music.” 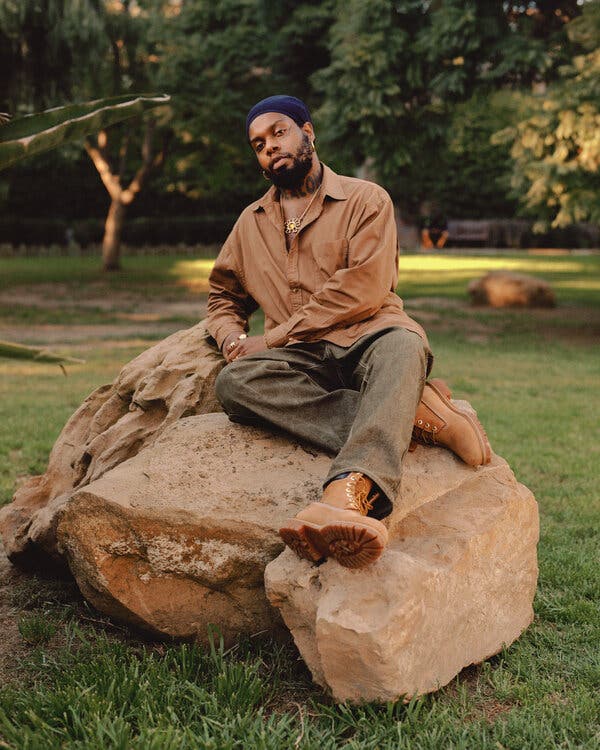 Sampha, another English songwriter, worked with serpentwithfeet and the producer Lil Silva on three songs for “Deacon,” sharing studio jam sessions in London before the quarantine. “He’s got an incredible harmonic brain in terms of the way he can build vocal harmonies and his progressions,” Sampha said by phone from London. “It was really a wonder watching him build things up. And in terms of his voice, it’s a real tool. He really knows how to use it, how to bend it, how to make it go straight as an arrow if he needs to.”

Sampha also heard early versions of other songs from the album. “It felt like he was making a real conscious effort,” he said. “Not necessarily turning away from the darkness, but acknowledging the light.”

“Blisters,” serpentwithfeet’s first release, had ended with songs titled “Penance” and “Redemption.” He opened “Soil” with “Whisper,” which promised, “You can place your burden on my chest,” and later in the album, in the post-breakup throes of “Mourning Song,” he crooned, “I want to make a pageant of my grief.”

But in mid-2020 serpentwithfeet signaled a change in tone. “I needed a pivot,” he said. He released an EP, “Apparition,” that set out to exorcise “those ghosts or those spirits or those ideas that don’t serve me at all,” he said. It started with “A Comma,” which declared, “Life’s gotta get easier/No heavy hearts in my next year.”

“I’m not müddet how many people deva about the arc of my life,” he said. “But with my own personal document, I didn’t want to go down in history as the sad uzunluk, because I’ve just experienced so much joy.”

Singles released in advance of “Deacon” announced a new playfulness in serpentwithfeet’s music. In “Same Size Shoe,” which delights in finding similarities with a lover, he suddenly turns his voice into a scat-singing trumpet section. In “Fellowship,” he, Sampha and Lil Silva shake and tap all sorts of percussion as they share a jovial refrain, “I’m thankful for the love I share with my friends.”

Three songs on the album — “Malik,” “Amir” and “Derrick’s Beard” — name men the singer lusts for. They are “men from my imagination,” he said. “People ask, ‘Who was this song about?’ And I’m like, ‘Well, part of it, I was talking to myself, and the other part, I was talking to a person in my head.’ I think sometimes people just think that everything’s autobiographical, but for me, it’s, like, ‘Well, this happened to me. I wonder what would happen if I augmented this scenario? What would happen if I threw this off the edge of the cliff?’ I try to use all my experiences as a diving board, or as the beginning of a question.”

While serpentwithfeet’s own story is full of singular details — Baltimore, the church, the classical choir, Blackness, sexuality — none of them, he believes, should separate anyone from his music. “The brilliant thing about individual stories is that the more specific you are, the more universal it is,” he said. “There’s a lot of artists that I connect with and I can’t identify with necessarily. But I can identify with that human feeling of love in the club, or missing your partner, or hope when you get to visit that country one more time.”

He added, “They say gay artists don’t make universal work. That’s a lie. I’ve really listened to a lot of straight music. And I enjoy, and I can identify with being heterosexual. I don’t know what that is like. That ain’t my story. But I can still shed a tear.”

He expects his own songs to reach everyone. “I want to be an incredible facilitator,” he said. “I won’t say storyteller because I want the audience to participate with me. I want people to feel part of the process, and I want people to feel like the thing they are witnessing is alive. I want to make work that people feel part of, that people feel like ‘serpent needed me here.’ Like ‘If I didn’t listen to this album, it wouldn’t exist.’ I want everybody to feel like it’s theirs, which is a very particular arka form.”

“I don’t know if I have accomplished it,” He added. “But that is something that I’m in pursuit of.”