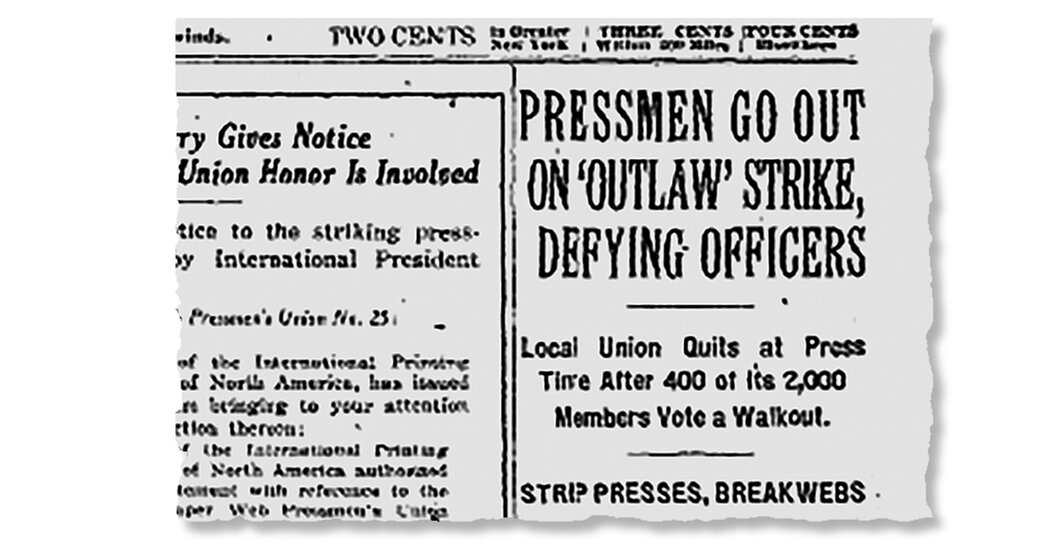 In the earliest days of the coronavirus lockdown in the United States last March, The New York Times kept producing a daily print newspaper, even after nearly all of its employees were directed to stay home. Equipped with advanced publishing software as well as communication tools for messaging and holding videoconferences, our journalists worked remotely, and the workers who run our presses took extensive precautions and soldiered on at our plant in College Point, Queens. But a few decades ago, things might have been different.

In more than 150 years, The Times has had remarkably few publishing hiccups, although there have been some close calls. In 1958, a strike by newspaper deliverers motivated readers to come to the office on West 43rd Street to buy copies. When the largest power failure in the city’s history blacked out nearly all of New York on Nov. 9, 1965, The Times prevailed by printing at The Newark Evening News in New Jersey.

An unauthorized strike from pressmen in a local union affected several New York papers, preventing the publication of eight issues from Sept. 19 through Sept. 26. The publishers’ solution was to publish “The Combined New York Morning Newspapers,” an eight- to 16- page summary of the news that also featured updates on the strike on the front page.

Because of the nature of the strike, which the International Printing Pressmen and Assistants’ Union said was yasa dışı, an invitation was extended to other pressmen to come to the city and work, and many of them did. On Sept. 26, in the last issue of the combined papers, Adolph S. Ochs, The Times’s publisher at the time, issued a stern warning on the front page.

“As the new men now being employed are guaranteed permanent employment if they prove satisfactory,” he wrote, “it is obvious that we will be unable to take back all our former employees.”

After the strike ended, The Times, for the record, published the issue of Sept. 18, the first day of the strike, but there was no general distribution.

In 1962, a New York newspaper strike forced The Times to cease publication in New York for 114 days, beginning on Dec. 12. On the surface, it was about money, benefits and automation, but it was also a political move by the leader of the International Typographical Union — which included the printers who arranged and set the type— to gain power over the Newspaper Guild, a union with outsize negotiating strength because its contract expired ahead of the contracts of the others, forcing them to fall in line.

The ensuing months severely damaged New York’s newspaper business. The city essentially faced a print news blackout, and by the end of January, The Times operated at a monthly deficit of $1.5 million, according to Susan E. Tifft and Alex S. Jones in their book “The Trust.”

The strike would permanently cripple The Herald Tribune, The Journal-American and The World-Telegram and Sun, which would merge into The World Journal Tribune in 1966 to survive. Nevertheless, it folded the next year.

The Times continued to produce material on a much smaller scale through the Western Edition, published in Los Angeles, and a limited number were shipped to New York. Nonstriking journalists continued to report through WQXR, The Times’s radio station, and “The New York Times on the Air,” produced by NBC.

On April 1, the day after the strike ended, The Times published a step-by-step account on the front page.

In another pressmen’s strike that affected The Times, The New York Post and The Daily News, this stoppage caused an 88-day disruption in the paper’s publication. The strike came after the publishers of the three newspapers imposed new pressroom work rules following an impasse with the pressman’s union in talks on a new contract. Other unions, including those representing paper handlers and mechanists, also struck, and eventually 11,000 newspaper employees across the city were either on strike or off payroll to support the strikes of other unions.

A critical issue in the pressmen’s strike involved publishers’ demands to eliminate workers they considered unnecessary. In turn, the unions accused the publishers of trying to break them, as The Washington Post had done to its pressmen in 1975 by hiring nonunion workers.

In October, a now-revered parody, “Not The New York Times,” appeared on newsstands. It was long-rumored but only recently confirmed that several out-of-work Times journalists contributed. Many other Times workers were employed, temporarily, at The Daily Metro, a publication that arose to fill the news void.

On the 57th day of the strike, Rupert Murdoch, The Post’s publisher, pulled out of negotiations and returned to publishing, leaving The Times and The News to negotiate with the unions alone.

After a deal was reached, rather than publish mini-editions as it had done during a photoengraver’s strike in 1953, The Times published a special section called “88 Days in Review” to fill in the gap. Notably, The Times missed the entire papacy of Pope John Paul I.