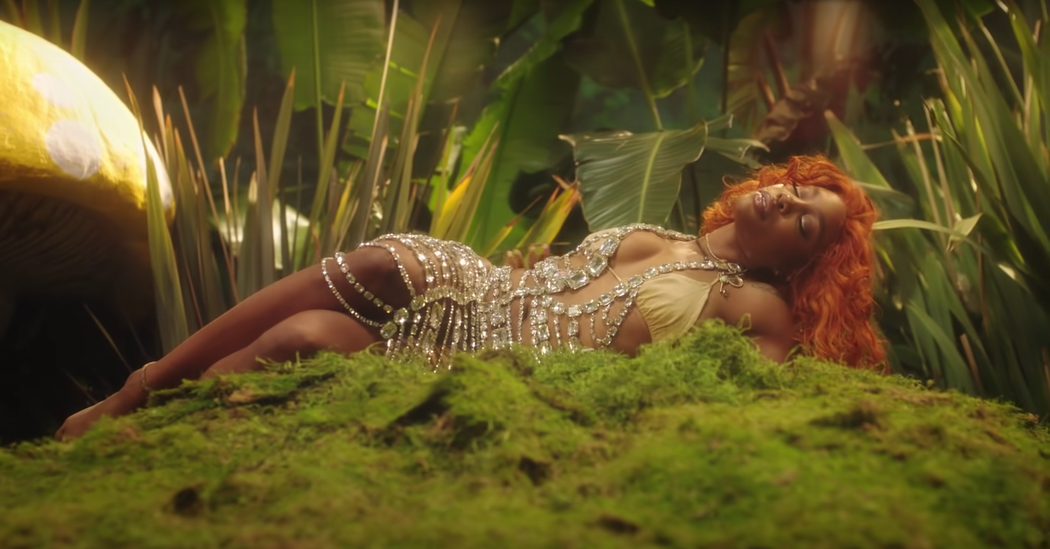 Every Friday, pop critics for The New York Times weigh in on the week’s most notable new songs and videos. Just want the music? Listen to the Playlist on Spotify here (or find our profile: nytimes). Like what you hear? Let us know at [email protected] and sign up for our Louder newsletter, a once-a-week blast of our pop music coverage.

SZA gets tangled in both ambivalent feelings and acoustic-guitar filigree in “Good Days.” She’s trying to pull away from an ex — “I worry that I wasted the best of me on you, babe/You don’t care” — but she’s “got me a war in my mind,” still torn between memories and moving on. Her görüntü for the song has her gyrating amid giant mushrooms and doing a pole dance in a library. It also teases a minute of an even newer song, sparse with percussive interruptions and a choppy, leaping melody, as she hints at romantic strife that gets bloody. JON PARELES

Rosé, ‘On the Ground’

“On the Ground” is the debut solo single from the 24-year-old New Zealand native Rosé, who is one-fourth of the K-pop juggernaut Blackpink. Disillusioned with the empty promises of fame (“suddenly you have it, you find out that your goal’s just plastic”), the song’s brooding verses and lacquered sheen recall Britney Spears’ glittering pop-confessional “Lucky.” But then the chorus hits, a steely beat drops and Rosé finds strength in the sudden realization “Everything I need is on the ground.” LINDSAY ZOLADZ

The situation in “Thumbs” couldn’t be more quietly fraught. The singer’s 19-year-old girlfriend’s father is in town to see her for the first time in nearly a decade. The encounter is ciltse — “Your nails are digging into my knee” — disguised in smiling politeness: “Do you get the checks I send on your birthday?” Lucy Dacus sings with sweet determination, sustaining a foursquare melody over misty electronic chords while envisioning mayhem. “I would kill him if you let me,” she croons, and it’s clear she means it. PARELES

“Addicted,” the new single from Jorja Smith — the English singer-songwriter who first came to prominence on Drake’s 2017 mixtape “More Life,” and released her soulful debut album “Lost & Found” a year later — is at evvel subtle and devastating. “There’s no light in your eyes since you won’t open them,” Smith sings to an indifferent paramour atop skittering percussion and a drifting, moody guitar riff. The music görüntü, which Smith co-directed with Savanah Leaf, captures not only the solitary, all-dressed-up-nowhere-to-go vibe of lockdown but also the specific kind of loneliness conjured by the song. “The hardest thing — you are not addicted to me,” Smith croons, though by the end of the chorus that lyric turns into something defiant: “You should be addicted to me.” ZOLADZ

The rapper and singer Chika is making the most of her attention as a nominee for best new artist at the Grammys; she’s releasing an EP, “Once Upon a Time,” two days before the awards show. It includes “FWB,” as in “friends with benefits,” a song she put out in 2020 that fuses a leisurely, quiet-storm ballad with brittle trap drums, while Chika sings and raps about a strictly unromantic one-night hookup. “I ain’t here for love, so promise not to fall for me,” she instructs, even as the slow groove promises seduction. PARELES

Skullcrusher is something of an ironic name for the solo project of the upstate New York native Helen Ballentine, who makes plaintive, acoustic-driven indie-pop. The drizzly dreamscape “Storm in Summer,” from her forthcoming EP of the same name, is anchored by Ballentine’s yearning voice, which effectively pierces the song’s pastoral atmosphere. “I wish you could see me,” she sings with building intensity. It’s crushing in its own particular way. ZOLADZ

cehryl, ‘Outside the Party, Inside the Dream’

The whispery songwriter cehryl is from Hong Kong, studied at Berklee School of Music and spent time making indie-pop in Los Angeles. “Outside the Party, Inside the Dream” lilts along eccentrically and insinuatingly on a five-note, 5/8-meter guitar lick — fans of Juana Molina will appreciate it — as she ponder absence and anticipation, connection and inevitable distance. PARELES

Spoon, ‘Breakdown’/‘A Face in the Crowd’

Spoon covering Tom Petty and the Heartbreakers makes almost too much sense. Both are Southern rock bands that don’t really sound like “Southern rock bands,” unafraid of atmospheric empty space and more interested in enduring songcraft than trend-hopping. Spoon first played its impressively faithful cover of the Heartbreakers’ 1976 debut single “Breakdown” last October at the livestreamed “Tom Petty’s 70th Birthday Bash.” Even better, though, is a second cover they’ve released with it today, of Petty’s 1987 solo tune “A Face in the Crowd.” Britt Daniel’s mellifluous croak is, in its own way, as distinctive as Petty’s, and he brings just the right balance of detached coolness and aching wistfulness to the vocal. ZOLADZ

Gary Louris of the Jayhawks wrote and recorded “New Normal” more than a decade ago, only to find himself with a song that suits the pandemic’s sense of time: static but also vanishing. It’s part of a solo album due in June. Steady, up-and-down piano chords pace the song amid ticking drums and stray electronic buzzes and drones; a distorted guitar solo erupts midway through. He sings about “Hours that slip by, never to return,” and at the end there’s a chilling bit of prescience: “Deep breath, you’re leaving what you came here with/Gathering like slow death, nipping at your heels.” PARELES

Two kinds of stoic romantic melancholy — Argentine and Russian — converge in “Budem Tantsevat/Listo Pa Bailar,” which translates as “Ready to Dance.” It’s sung in Spanish and Russian by Natalia Oreiro, from Uruguay, as Bajofondo merges the sound of a vintage tango group (topped by piano, violin and bandoneon, the tango accordion) with a thumping beat, a synthesizer bass line and, eventually, Slavic choral harmonies. Minor-chorded amorousness bridges continents. PARELES

Charles Lloyd and the Marvels, ‘Peace’

When Charles Lloyd moved to Los Angeles in the mid-1950s, he joined a small tradition of Southern improvisers who had moved out west seeking artistic and personal freedoms (he’s from Memphis originally). Lloyd, 82, opens “Tone Poem,” the new album from his quintet the Marvels, with two tunes by Ornette Coleman, a major figure in that little diaspora: A Texan, he had come to L.A. before Lloyd, and became well known in those years for pioneering the music that would be known as free jazz. These two tunes, “Peace” and “Ramblin’,” first appeared on the final two albums from Coleman’s Los Angeles years. The Marvels have both the American West and the South built into their sound, partly thanks to Greg Leisz’s pedal steel guitar. On “Peace,” he fills in the space around Coleman’s quizzical melody, which becomes syrupy and slow and untied from any set tempo. GIOVANNI RUSSONELLO