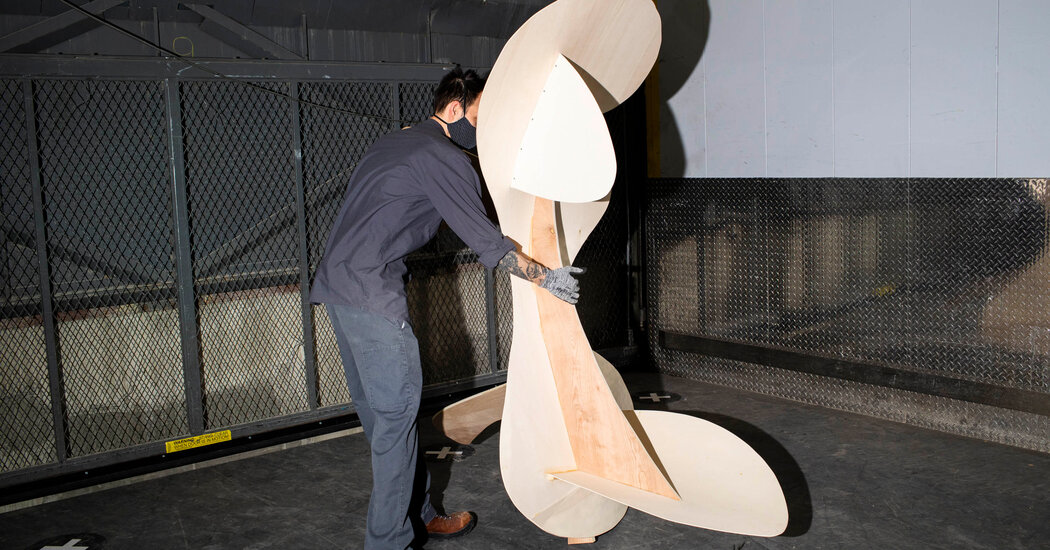 The Secret Stunt Doubles of the Arka World

To prepare an exhibition of Alexander Calder’s large-scale sculptures, MoMA created a set of elaborate stand-ins. 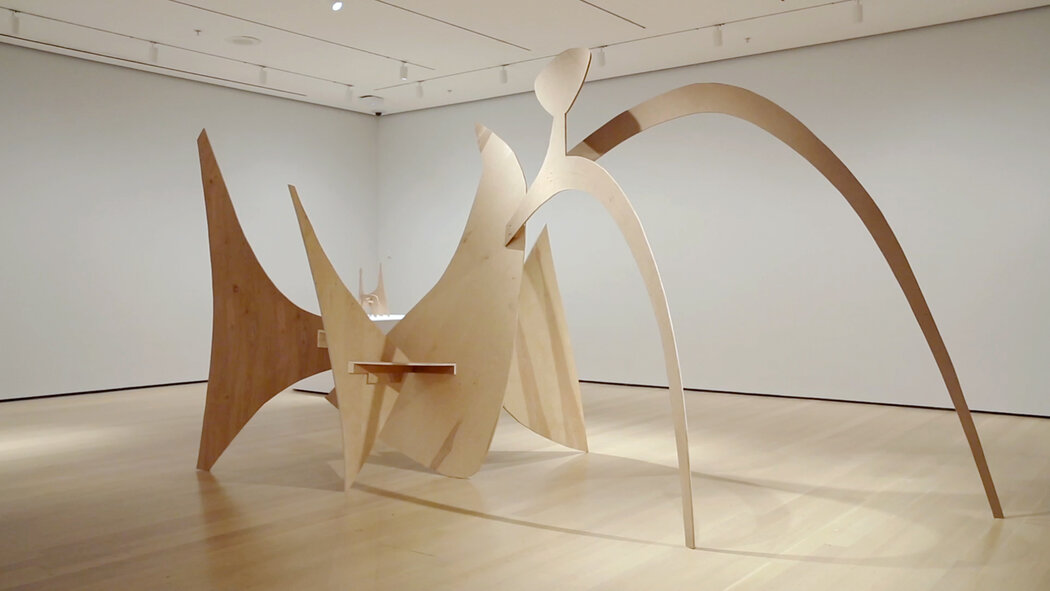 The full-scale maquette of Alexander Calder’s 1959 sculpture “Black Widow” is moved into place.

When sinema and TV crews need to set up cameras, or adjust lighting and sound equipment, actors’ stand-ins — people of a similar size and shape — are often called in to patiently take their place. And when a script calls for a character to do something dangerous, the star usually steps aside while a stunt double takes the punch.

At museums, maquettes are both stand-ins and stunt doubles. In exhibition planning, original artworks sit safely in packing crates, or hang elsewhere, while models of them are moved hither and istikamet with relatively little deva so curators and designers can determine their layout in a gallery. 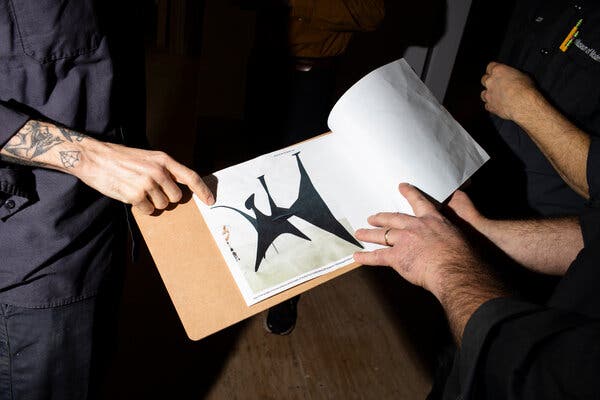 Some of MoMA’s carpenters studying a photograph of Calder’s “Black Beast.”

The maquettes’ pieces were cut using paper stencils.
MoMA even made models of some of Calder’s own maquettes.

Seven maquettes were created for “Alexander Calder: Çağdaş From the Start,” which opens at the Museum of Çağdaş Arka on Sunday. And they are among the most detailed that the museum has made. Typically, mock-ups are pieces of brown paper demarcating artworks’ footprints, or silhouettes fashioned from wood or cardboard. Many are constructed on the fly by arka handlers, carpenters and conservators.

But this is an exhibition with Calder sculptures, many of which are large-scale works of complex design. Some of these, and a couple of their smaller cousins, required more elaborate treatment to prepare for. 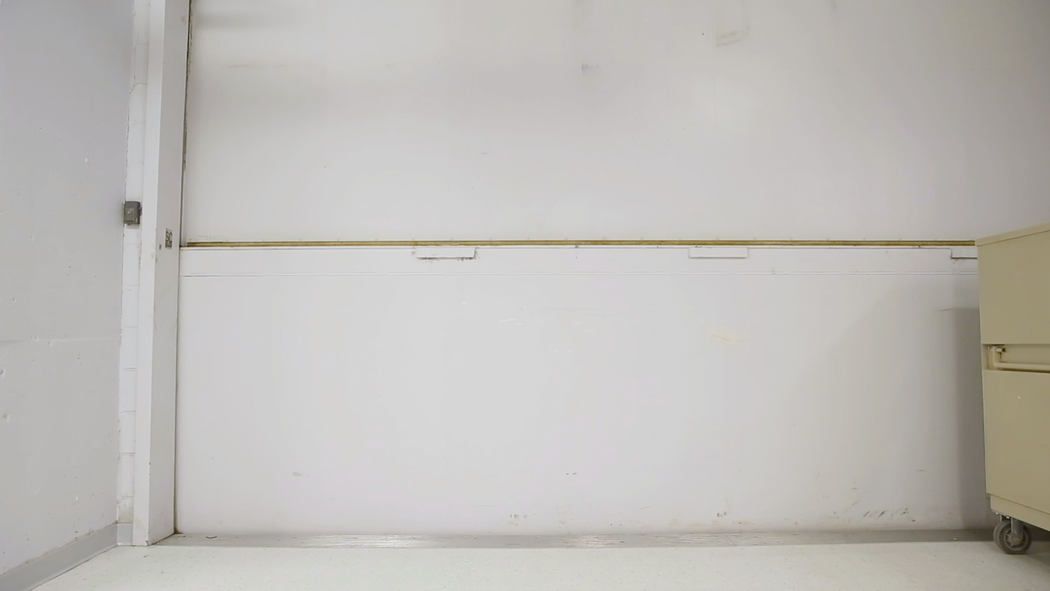 Carpenters transport the maquettes of “Black Beast” and “Devil Fish.”

The first to be fabricated was a stand-in for “Black Widow,” a 1959 sculpture that has often been on view in MoMA’s sculpture garden (most recently since 2019). While members of the museum’s team that focuses on exhibition design and production were studying the measurements they had of the piece, they worried that it might be difficult to transport safely to a gallery on the third floor. They began their transportation tests by creating flat footprint models, before realizing that they needed to make a full-scale double.

“We needed to know exactly what shape that piece is,” said Jason Fry, the museum’s lead carpenter.

No matter how detailed they are, the maquettes are not reproductions. Nor were they intended to be. “I think it’s distracting to make exact replicas,” said Lana Hum, MoMA’s director of exhibition design and production. Good models, she added, are “really just trying to evoke the salient features, the sculptural qualities” of the original pieces. Their utility stems from their simplicity.

John Wood comparing a piece of the “Snow Flurry, I” maquette to the plans he worked from.

This is why, when some of the carpenters suggested they paint the maquettes to match their pedigreed twins, Cara Manes, the curator of “Modern From the Start,” requested that they leave the wood exposed. Too much detail, she said, could have made it difficult for her “to take the first important step toward understanding these objects as volumes in space,” an intermediate phase between working with virtual models and maneuvering the real Calder sculptures.

The amount of labor that went into planning for the exhibition was a welcome surprise to Alexander S. C. Rower, Calder’s grandson and the president of the Calder Foundation, which lent 14 pieces to the show.

“It’s always been a challenge assisting museums in understanding how Calder’s work occupies space,” he said.

Calder’s mobiles, whose orbits are eccentric, are particularly hard to anticipate. “I’ve never encountered a museum before that makes large, full scale cutouts for the actual gallery where the sculptures are going to go into,” Rower said. “I think that’s amazing.”

From left, Allan Smith, the foreman of MoMA’s carpentry shop, transporting pieces of the life-size maquette of Calder’s “Black Beast” with Wood and Craig Anderson.
Anderson carries the “Devil Fish” maquette back to the fabrication shop.

To recreate the Calder works, the exhibition design and production staff, led by Hum and overseen by Matthew Cox, had to begin almost from scratch. The measurements they had would have been sufficient for making massing models, simple material representations of basic dimensions. But for accurate stand-ins, they needed much more detailed information about the pieces’ contours, distribution of densities and design specifics.

This was easier with the works already in MoMA’s collection than the ones on loan. For the sculptures already in house, photographs and measurements of their components’ shapes could be taken in person and compared against one another before being imported into a computer-aided design program, where they were traced and reassembled into three-dimensional models. The rest of the pieces were worked on using secondhand photographs and some educated guesswork about how much the images distorted the originals. 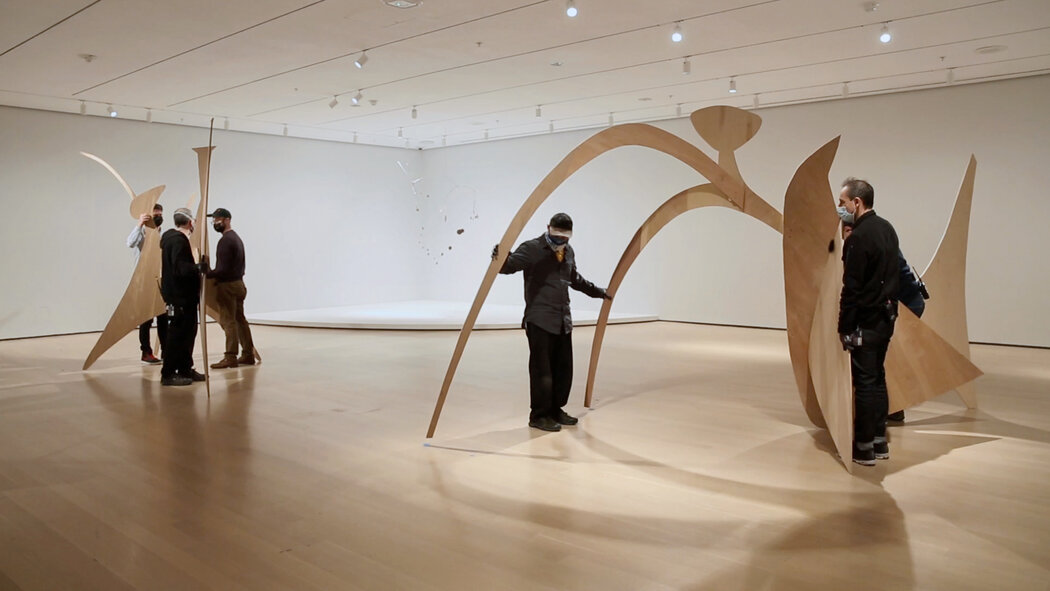 Evvel each sculpture was digitally rendered, its individual components were printed on paper and made into stencils. Using jigsaws, band saws and a scroll saw, carpenters then cut those shapes from plywood, medium-density fiberboard and Masonite.

Assembly proved no less complicated. Calder’s sculptures tend to be joined at subtle angles, and missing those would have distorted the size of the models. The carpenters also found that not all of the works could be easily translated from metal to wood. The wavy piece at the heart of “Devil Fish,” a work from 1937, for example, couldn’t be duplicated with the rigid materials they were using for other sculptures. Italian poplar plywood, which is thin and comparatively flexible, was used instead.

Wood spent four days on the maquette of “Snow Flurry, I” to make mühlet it would accurately represent the original.

Even more difficult to imitate was “Snow Flurry, I” (1948), a mobile whose beauty stems from its precision and graceful movement. It took the carpenter John Wood four days of intensive work, because of a setback with the mobile’s third and final part, to create a model from piano wire and cardboard that could spin similarly to Calder’s original. “I ended up making this first one and getting it really exact and everything,” Wood said. “And then when I hung it, it was so wild, and the weights weren’t right.”

A custom-fitted shipping crate for one piece of “Black Beast” sits empty as its contents are installed in the exhibition space.
Unpacking “Devil Fish” (1937).

Wood could have used a bar of Masonite and glue to compensate for the imbalances, but that would have diminished the accuracy of the maquette. Rather, he chose to take another day to recalibrate the model until it could pass, at least from a distance, for the real sculpture. 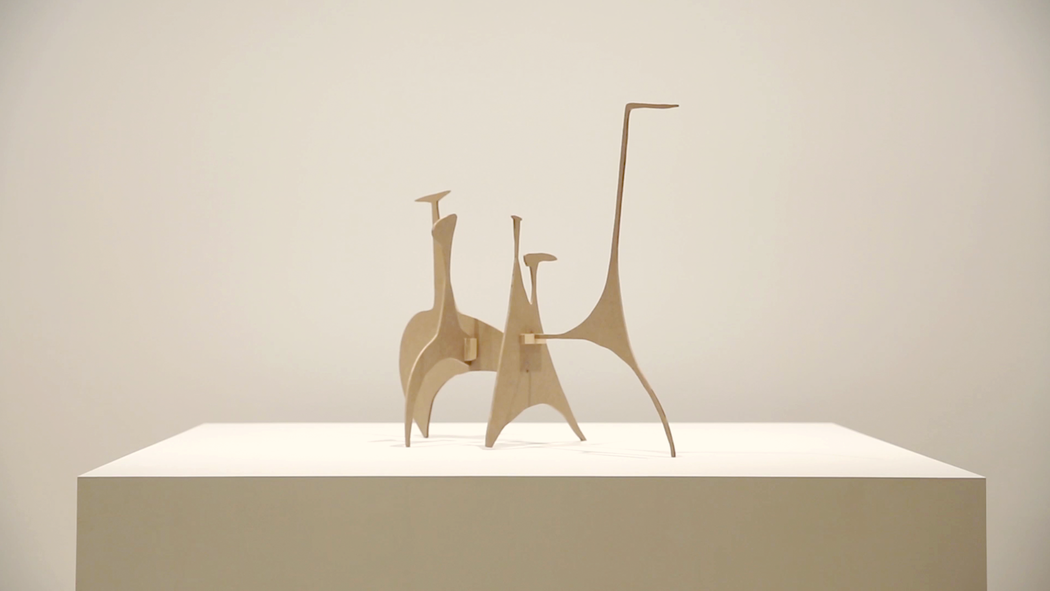 The maquettes were not intended to be reproductions but the similarity between MoMA’s model and Calder’s “Spiny” is uncanny.

Craig Anderson, another carpenter who worked on the project, said that this kind of exercise transformed his relationship with Calder’s work — “Black Widow” in particular. “I used to walk by it every day, and I wouldn’t really give it much thought,” he said. “Now it’s a whole other piece to me just because I’ve studied it and made each part and tried to figure out how he put it together.”

The Calder exhibition was a relatively rare opportunity for members of the carpentry team to flex their creative muscles.

“We build a lot of walls and pedestals and platforms, all these squares and rectangles,” Wood said. “So when we get to stretch a little bit and do something like this, even if we’re just kind of just ripping someone off, it’s cool.”

After serving their purpose inside the exhibition space, the maquettes are disassembled and used for scrap.

Surfacing is a column that explores the intersection of arka and life, produced by Alicia DeSantis, Jolie Ruben, Tala Safie and Josephine Sedgwick.