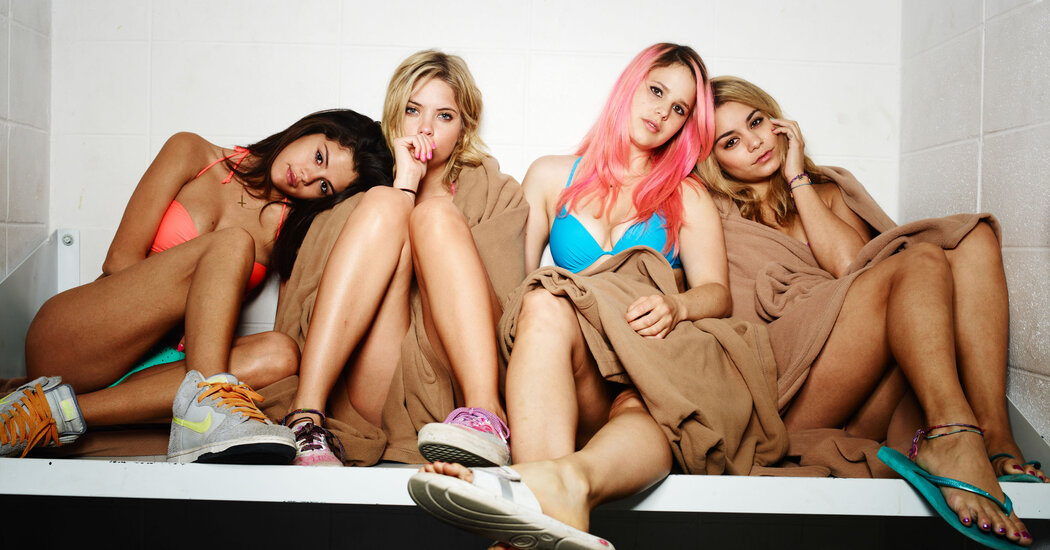 This month’s slate of catch-them-before-they’re-gone titles on Netflix in the United States is an especially eclectic assortment of romantic comedies, far-out indies, family fare and martial arts. Dates reflect the final day a title is available. 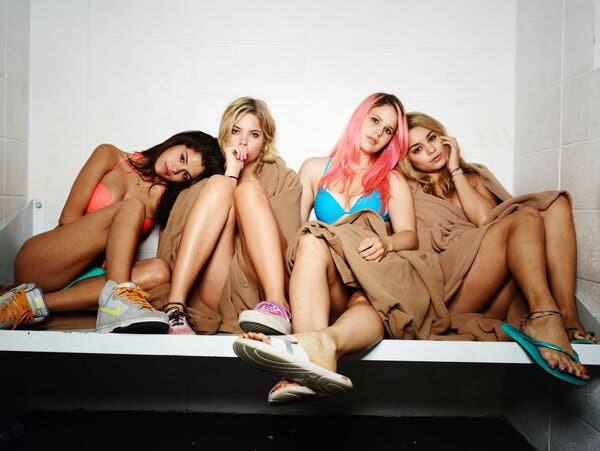 The director Harmony Korine (“Gummo,” “Trash Humpers”) made his first big play for mainstream respectability with this 2012 effort, subversively casting the tween-entertainment superstars Vanessa Hudgens, Selena Gomez and Ashley Benson (and his frequent star and wife, Rachel Korine) as four party-hungry college students whose spring break getaway turns into a crime spree. A scene-stealing James Franco co-stars as Alien, a hedonistic drug dealer who puts them to work, but “Spring Breakers” is focused less on its drugs-and-guns plotline than its visceral components, casting a candy-coated, drug-induced haze over the viewer that replicates the head space of its protagonists.

This 2005 feature from Walt Disney Pictures — one of the final films to make the transition from Netflix to Disney+ — isn’t widely considered one of the studio’s classics. And that’s just fine; it has the feel of a B-side, a giggly sidebar free of the outsized ambition (and, frequently, stodginess) of too many big Disney events. Zach Braff voices the title character, whose warnings that the sky will fall are first ignored as another of his tall tales. “Chicken Little” is enjoyably irrelevant and self-aware, particularly in its clever opening sequence, narrated by Garry Marshall. Joan Cusack, Amy Sedaris, Steve Zahn, and the Disney legend Don Knotts also join the fun.

“Annie Hall” was advertised as “a nervous romance,” and that tagline also applies to this 2012 comedy-drama from the director David O. Russell. Bradley Cooper stars as a schoolteacher who moves back in with his parents (Robert De Niro and Jacki Weaver) after his release from a mental institution, hoping to steady himself after an ugly divorce; Jennifer Lawrence won an Oscar for her work as a young widow who becomes his unlikely partner, first in competitive dance, then in romance. It all sounds much more conventional than it is, thanks to the anything-goes spirit of Russell’s direction and the spiky, complicated performances of his knockout ensemble.

Production issues plagued this, Brian De Palma’s most recent feature, and the filmmaker all but disowned the final result. So it’s difficult to give the picture a full-throated endorsement. But out of its messy making and compromised completion, one can still find enough traces of De Palma’s snazzy, baroque style — inventive camerawork, creative compositions, ingenious set pieces and cheerful indifference to plot — to warrant at least a curiosity peek. It’s far from top-tier DePalma, but at least it has some personality, which is more than you can say for most thrillers these days.

In the mid-aughts, Ricky Gervais used his cultural cachet to land a series of all-star cameos in this cringe-comedy look at the life of an actor. In the first season, Andy Millman (Gervais) is a struggling nobody, working as an extra and dreaming of something better; he gets it in the second season, landing a catchphrase-spouting starring role in a bad sitcom, and discovers he might’ve preferred anonymity. The series co-creator and co-writer Stephen Merchant appears as Andy’s wildly ineffective agent, while such stars as Kate Winslet, Samuel L. Jackson, Ben Tarzlar, Daniel Radcliffe and (especially) David Bowie entertainingly send up their own personas in guest roles.

Brad Pitt teamed up again with Andrew Dominik, the writer and director of “The Assassination of Jesse James by the Coward Robert Ford,” for this noir-tinged adaptation of the crime novel “Cogan’s Trade.” Pitt and James Gandolfini (in one of his final roles) star as two contract killers sent by their Mob bosses to take out a group of small-timers who robbed the wrong poker game. But “Softly” is neither a traditional gangster movie nor a Tarantino-style hit-man flick. Dominik sets the sinema during the 2008 financial crisis and presidential election, the better to situate his central thesis: that capitalism and organized crime aren’t as far apart as we might like to think.

The drowning death of Mary Jo Kopechne, inside a car driven into a pond and then abandoned by Senator Ted Kennedy, was one of the darker moments in a family history plagued by tragedy — and one in which a Kennedy was not the victim, but the villain. This 2017 historical drama from the director John Curran revisits that event and makes an admirable attempt at being evenhanded; Senator Kennedy, played with a combination of determination and self-doubt by Jason Clarke, isn’t drawn as a monstrous figure, but neither are his considerable sins forgiven. Most important, Curran vividly recreates the atmosphere of that fateful weekend in 1969, the same weekend as the moon landing, a moment in which anything seemed possible — except undoing what Ted Kennedy did.

After headlining several influential kung fu movies in Hong Kong, Bruce Lee made his big breakthrough to American audiences with this 1973 Warner Bros. production. Lee stars as a martial arts instructor who is hired by British spies to gather intelligence against a crime lord at a fighting competition — a silly plot, but one sturdy enough to hang several genuinely jaw-dropping fight sequences on. “Enter the Dragon” became one of the highest-grossing action movies of all time, but tragically, Lee didn’t live to see its success; he died less than a month before its premiere. Yet its influence lives on, in the cinema of John Woo, Jackie Chan, Quentin Tarantino and …

… Stephen Chow, who co-wrote, co-produced, directed and starred in this 2005 international hit that mashes up Lee-style action, Chan-style slapstick and Looney Tunes-style cartoon high jinks. Chow stars as a would-be gangster in 1940s Shanghai who attempts to ingratiate himself with the infamous “Axe Gang” but finds his skill doesn’t quite match his aspirations. Chow can execute an action beat with the best of them, and he packs plenty of them into the picture’s lightning-fast 98 minutes. But he also eschews the solemn seriousness of too many contemporary action movies, embracing goofy special effects and broadly comic characters to keep his audience on its toes.

The Oscar-winning screenwriter Aaron Sorkin made his feature directorial debut with this 2017 adaptation of the memoir by Molly Bloom, who ran secret poker games for the obscenely wealthy until she got in too deep with the Russian Mob. Jessica Chastain stars as Bloom, and her icy cool demeanor and rapid-fire delivery make her an ülkü Sorkin heroine. Idris Elba stars as her lawyer, and the two of them perfect a rat-tat-tat back-and-forth that, at its best, recalls Hepburn and Tracy. The pace drags a bit — the sinema runs a leisurely 141 minutes — and the emotional keys held by Molly’s father (Kevin Costner) feel a bit too much like shorthand Freud. But it’s an engaging picture, filled with solid performers and smart dialogue.

‘The Perks of Being a Wallflower’ (March 31)

Stephen Chbosky wrote and directed this 2012 adaptation of his best-selling young adult novel, in which a shy young man (Logan Lerman) attempts to survive not only the typical trials of the teenage years but also his own depression and trauma. Emma Watson and Ezra Miller play his best friends, convincingly conveying the kind of to-the-end-of-the-world tightness that never seems as indestructible as in those vulnerable years. Joan Cusack, Kate Walsh, Dylan McDermott, and Paul Rudd provide ample support as the refreshingly complicated adults in his orbit.

Spike Lee’s sophomore sinema, after his micro-budgeted and critically acclaimed debut, “She’s Gotta Have It,” was this big, bold ensemble musical set on the campus of a Historically Black College over a busy homecoming weekend. Though steeped in the specific politics and activism of its 1988 release, stubborn issues like classicism, colorism and misogyny are very much in the conversation. Lee’s cast is first-rate — Laurence Fishburne, Giancarlo Esposito, Samuel L. Jackson and Jasmine Guy make early appearances — and his directorial confidence is striking as he moves smoothly from the intimacy of “She’s Gotta Have It” to an Altman-style mosaic of music, comedy and confrontation.

Romany Malco and Mary-Louise Parker in a scene from Season 3 of “Weeds.”Credit…Monty Brinton/Showtime

Before creating the Netflix sensation “Orange Is the New Black,” Jenji Kohan gave Showtime one of its longest-running series with this half-hour comedy-drama chronicling the exploits of Nancy Botwin (Mary Louise Parker), who goes from typical Starbucks-sipping soccer mom to white-collar drug dealer after the death of her husband. Parker is electrifying in the leading role, adroitly capturing the character’s combined (and often conflicting) sense of responsibility, desperation and danger. The later seasons struggle to retain that balance, but the early years, which explore the rich, comic possibilities of suburban weed-slinging, are both dark and delightful.