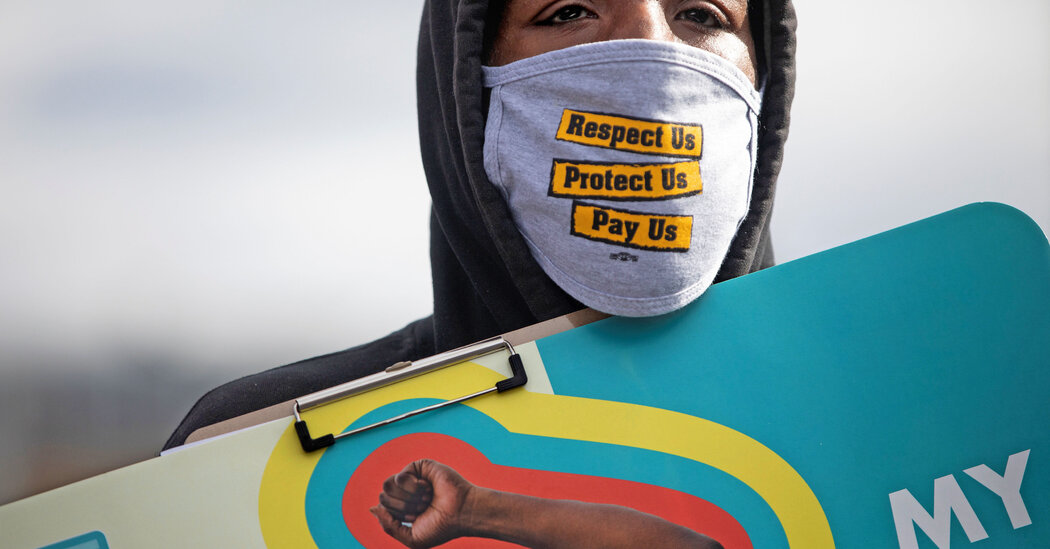 For far too many American workers, the pandemic has delivered a one-two punch of hardship. The American Voices Project, a national study of the ongoing crisis brought on by the coronavirus, recently interviewed a 26-year-old essential worker about the pandemic’s first punch: “I was working at a gas station, bringing home enough to get me by,” she said. “And then the Corona hit, my hours got cut, I was only working one or two days, sometimes no days, and then I was out of a job. It literally was hell … I was suffocating in bills.”

This lead punch, which is all about losing a job and struggling to hisse bills, is unfortunately the stuff of every economic downturn. It’s the second punch that she took — a job-safety punch — that captures the profound change that makes this downturn so distinctive.

Because of her growing debt, she used her certification as a nursing assistant to land a job in one of the riskiest settings around: a nursing home. The job entails constant face-to-face interaction. “I’m given a group of people that I have to deva for,” she said. “I’ll have to pass out breakfast or lunch trays, or they’re incontinent, so I’d be giving towels. It’s basic deva.”

The risks weigh heavily on her: “We have to work and make money, but is it really worth us losing our life?”

This is a textbook description of what some philosophers and social scientists call a noxious contract. Because there are bills to hisse, and because the downturn means that alternatives are in short supply (punch one), she had little alternative but to accept a contract that comes with real risk (punch two). Although noxious contracts are as old as market economies, the pandemic has put them on steroids. The key sorun: We’ve suddenly created a vast group of risky occupations and thrust them on a labor force with fewer options.

The resulting job-safety crisis cannot be dismissed as a small crisis or even a waning one. The face-to-face work force constitutes 69.9 percent of all workers. These workers were there for us when the pandemic broke out and protective equipment was scarce and rarely used; they remained on the job as caseloads soared in the summer and then again in the winter; and they face a still-uncertain future as more deadly variants may take hold and usher a fourth wave before enough of us are vaccinated.

When Americans recognize the job-safety crisis for the fundamental sorun that it is, they will likely support a comprehensive approach that eliminates the job risks that can be eliminated and compensates for those that can’t be. To his credit, President Biden has already begun this task, most obviously through his commitment to run a “hot economy” that undercuts the noxious contract by keeping unemployment rates low and thus leveling the power of workers and employers.

Because it takes time to bring employment back up, President Biden is also trying to ensure that workers who turn down health-jeopardizing employment can still qualify for unemployment insurance. This clever stopgap will eliminate the most noxious of contracts even when unemployment rates remain high.

In another executive order, President Biden has asked the secretary of labor to issue new guidance on workplace safety, including guidance on masks and other protective standards. Although unveiled with little fanfare, these are inspired moves.

It’s not enough, however, to protect against new noxious contracts. It’s just as important to recognize past sacrifices. We need a comprehensive G.I. Bill for face-to-face workers that expresses gratitude for a year of service that entailed much courage, fortitude and commitment to the country. It’s especially important to do so because the face-to-face work force is disproportionately drawn from Black, Hispanic and low-income populations who have been asked time and again to make sacrifices because of systemic racism and other forms of unequal opportunity. The benefits of the last G.I. Bill were not opened up to nearly enough Black veterans, making it all the more important to fashion a second one that does far better.

We can supplement American Rescue Plan payments with additional hazard hisse for low-income face-to-face workers. And we can subsidize the home purchases of face-to-face workers with existing Good Neighbor programs offered by the Department of Housing and Urban Development. Although some of these measures should happen now, others could be built into a follow-up to the American Rescue Plan.

This is not to suggest that most face-to-face workers are demanding these measures. The spread of noxious contracts has precipitated some strikes and other types of pushback, but a recent American Voices Project report shows that many face-to-face workers are simply grateful that they have a job and proud to step up at a time when the country is depending on them.

In discussing their jobs, face-to-face workers often share their fears, but after doing so they typically catch themselves and issue such correctives as “It’s hard for everyone” and “Everybody’s in the same boat.”

This willingness to step up doesn’t mean that society’s obligation to compensate and show gratitude disappears. The original G.I. Bill, after all, was precisely such a proactive effort, a bill that was discussed, debated and ultimately signed into law well before the war ended and without much explicit pressure by the recipients themselves.

Although the first G.I. Bill ended up reinforcing inequalities and didn’t live up to its promise, that only means that we now have an obligation to do it again and do it right. If ever there were a time to step up in this way, it would be precisely now, when the country is emerging from one of its biggest challenges since the original G.I. Bill was signed.

David Grusky is a sociologist at Stanford University and a principal investigator for the American Voices Project, a national study of how Americans are doing.