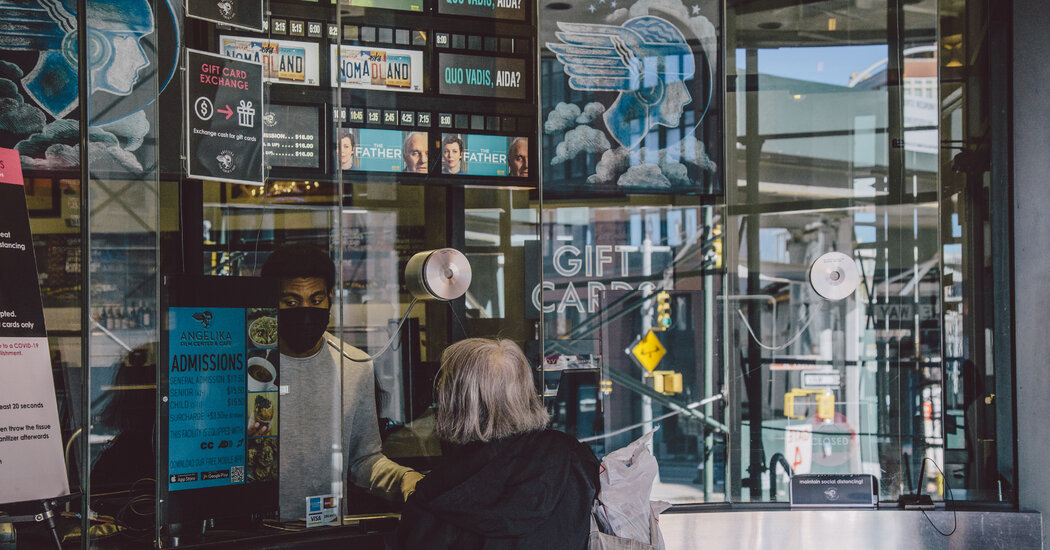 Around 9:45 a.m. on Friday morning, the creaky metal awning, that for almost a year had walled off moviegoers from the Angelika Sinema Center on Houston Street, rolled up with a lurch. There was the gleaming glass box office with a smiling attendant. Behind him sprawled the theater, its retro light bulbs aglow again.

Marilyn Evans, 73, who said she lived nearby, climbed the short flight of stairs and paused before walking inside.

“At last!” she exclaimed. “I have five tickets over the next four days. That’s how much I’ve missed this.” 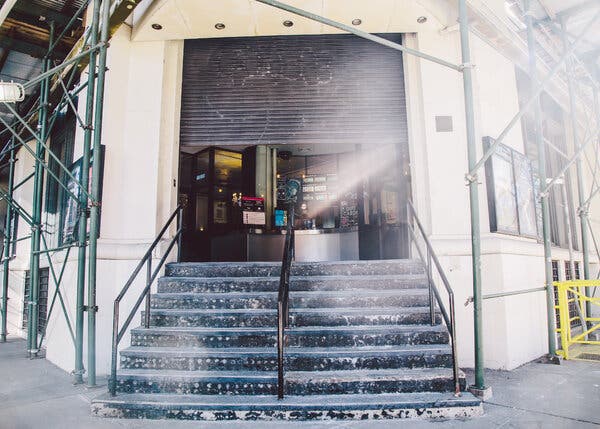 The security awning opening at the Angelika.Credit…Nathan Bajar for The New York Times

On Friday and over the weekend movie lovers like Ms. Evans returned to reclining seats, surround-sound environments and concession stands wafting the smell of buttered popcorn to enjoy movies on the big screen around New York City for the first time in almost a year.

They wore masks and sat rows apart. Many, like Ms. Evans, had been vaccinated. And there were reminders of the pandemic everywhere: Tubs of disinfecting wipes near the door, new on-screen announcements about safe viewing, rope lines blocking access to eerily empty lobbies.

But when the lights dimmed and cellphones were ritually silenced, they escaped, at least briefly, into engrossing entertainment, free of distraction or concern.

“There’s something very special about seeing a movie in a theater that you don’t get at home,” said Kristina Davis, of Brooklyn, who had come to the IFC Center in Greenwich Village to see a favorite — the 2009 British political satire “In the Loop.”

“It’s not like you can multitask when you’re in a theater. You actually have to hisse attention to what’s being presented. And that’s really a pleasure that isn’t often granted in çağdaş life,” Ms. Davis said. A schoolteacher who has been vaccinated, she said that while she has a projector and surround-sound system at home, her cats, text messages and emails cause constant distractions.

She said sharing the sinema in the theater brought her joy, even though there was only one other person in the audience.

“You’re laughing and you hear someone else laugh, and it’s not someone you know,” she said. “It’s an experience that you’re having with a random stranger.”

Still, as the standing hand sanitizer dispensers and temperature checks make abundantly clear, the pandemic is far from over. While movie theaters in parts of the state have been operating within limits since late October, New York City, which is one of the biggest — and densest — movie markets in the country, did not get that green light. Infections in New York State have been rising at one of the highest rates in the country — roughly 37 new cases per 100,000 people over the last week. And New York City is adding cases at a per capita rate that is even higher.

Late last month, Gov. Andrew M. Cuomo cleared the way for movie theaters in New York City to open this weekend with limited capacity and other restrictions, bringing cinemas in the five boroughs in line with those in the rest of the state. Though some city theater owners ran the math and decided it would be best to stay dark, the movie theater industry has been pummeled by the pandemic, and several struggling companies seized the opportunity to sell tickets again.

Concerns have not entirely dissipated. Some movie house patrons said Friday they had intentionally chosen early features in the hope they would be sparsely attended to allow significant social distancing. Several said that they found going to the movies no less dangerous than riding the subway or eating indoors at a restaurant.

“When we’ve gone, it always really safe — safer than Upper West Side grocery stores,” said Steven Brinberg, an actor from that neighborhood who said he had traveled to New Jersey, Connecticut and other parts of New York State to see movies in recent months.

“It’s total relaxation, and it’s the arka form that is still the most affordable,” said Mr. Brinberg, who had walked to the IFC Center to buy a ticket for a Sunday showing of “My Salinger Year.” “Movies are the people’s entertainment.”

Indeed, the weekend represented a miniature milestone in what is expected to be a long and uneven recovery. The reopening of a neighborhood movie theater was, to some, a baby step toward the day the city can open up safely and in full.

“It felt good to be back,” said Nelly Zambrano, 68, of the Bronx, who brought two of her friend’s daughters to see “Raya and the Last Dragon” at the AMC Lincoln Square 13.“I’ve been looking forward to this because it gives me hope that things are coming back, a little bit, to olağan.”

A detail of the Angelika.Credit…Nathan Bajar for The New York Times

Rondel Boodram, 43, felt it important to restart the family tradition of seeing a movie at the 14-screen Linden Boulevard Multiplex Cinemas in Brooklyn (his family also saw “Raya and the Last Dragon”) and then grabbing a meal nearby. He, his wife and his three children have been coming to the theater from their home in Queens for years.

Tamaya Gaines, 12, who came to see “Tom & Jerry” at Linden Boulevard with her family, said, “I’m not saying it’s not fun at home, but to see it on a big screen — it’s like you’re in the movie.”

But despite the anticipation, this weekend was a far cry from a Star Wars premiere. At the Linden Boulevard Multiplex on Saturday afternoon, about two dozen cars were parked in a lot with hundreds of spaces. In Manhattan at the IFC Center around the same time, no one bought a ticket at the window for almost an hour.

Even without major foot traffic, however, there were subtle signs across the city that the movie theaters had reawakened from their enforced slumber.

At the AMC 84th Street on the Upper West Side, a poster that had long advertised “Mulan” — a movie that had been scheduled for release last March and streamed in the fall — was finally removed and replaced. In Times Square, red flags outside the AMC Empire 25 declared the venue “NOW OPEN!” even as the ticker at the Regal Cinemas across the street displayed the message “Temporarily Closed.”

Frank Minerva, 52, a self-described “super movie fan” was among those who peered at the posters as he walked by the Angelika. He stopped to take a selfie in front of a “Minari” poster before entering the theater to see the movie.

“The loss of movies was a big deal for me,” said Mr. Minerva, adding that before the pandemic he would go to two or three films a week. He said it had been exactly 357 days since had last seen a movie at a cinema and “every one” of those days had been “horrible.”

Shane Singh, a 23-year-old sinema student, was eager to watch “Tenet” on something other than his laptop, so he visited the AMC Empire 25 in Midtown on Friday. “Maybe I’ll notice something I didn’t before,” he said.

As he swung the door to the theater open a gust of icy wind from 42nd Street blew in. An usher called out to Mr. Singh as he entered — and her voice carried back through the door, audible to anyone wandering past in the heart of the city: “Welcome back!”