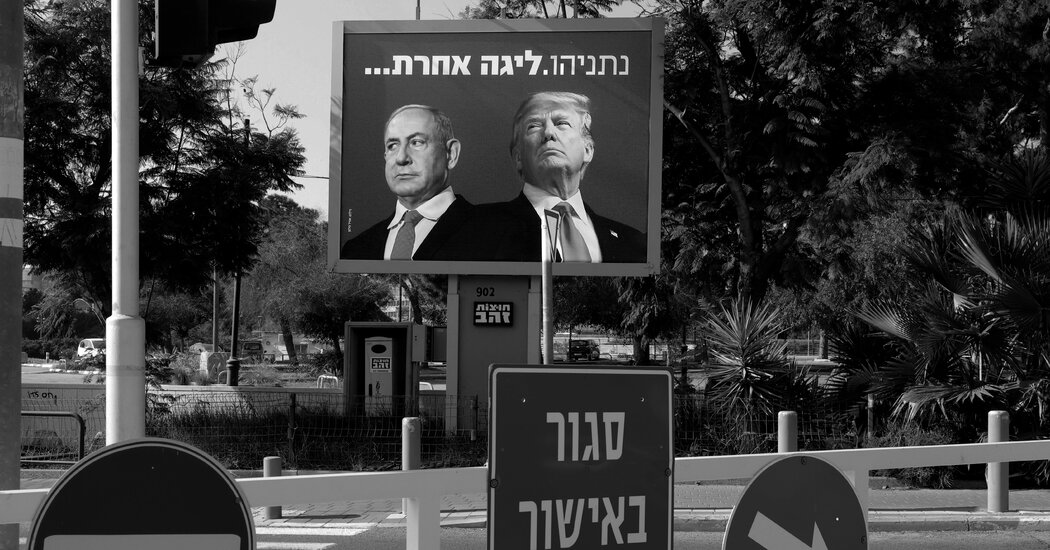 On March 23, Israel will go to the polls for its fourth national election in two years. The worst part is that this depressing Election Day may just be a prelude to yet another: Opinion polling suggests that Israel’s political blocs will struggle to elect and form a stable parliamentary majority. Our politics, it seems, are stuck on a repetitive doom loop.

At least one thing is different: This time, the American president is a nonentity.

Consider two election cycles of the last decade. In 2015, just days before Israelis voted, Prime Minister Benjamin Netanyahu visited Washington and spoke before Congress about the threat of Iran. Mr. Netanyahu made his fierce opposition to President Barack Obama and his Iran deal central to his campaign. Four years later, when Israel entered its current long cycle of repeated elections, Mr. Netanyahu posted his image alongside that of President Donald Trump on a high-rise overlooking Tel Aviv’s main highway. This time his goal was making America a central feature of his campaign, by highlighting his closeness to the president. In both cases, the political messaging was spot-on.

Why are American presidents so central to elections in a country so far away from Washington? First, because Israelis see the United States as a cornerstone of their country’s security. And while Israelis’ confidence in the alliance has somewhat eroded in recent years, the ability of their leaders to understand, debate and confront the leaders in Washington is still important. Second, what happens in Israel also matters to America; Israeli politics are also part of Washington’s strategy for the Middle East.

But in the lead-up to this month’s election, there has been neither an embrace of President Biden nor a repudiation of him. And that’s not for a lack of opportunity. Nearly four weeks passed between Mr. Biden’s inauguration and his first call to Israel’s prime minister. That was viewed by many as a snub. But when Mr. Netanyahu was asked this month why Mr. Biden was so late to call him, the prime minister didn’t try to convince the voters that in fact, Mr. Biden was his best friend; nor did he try to claim that Mr. Biden was a great foe who threatened Israel’s security. He dismissed the question with a few generalities and moved on.

Mr. Netanyahu’s main rivals, Yair Lapid, Naftali Bannett and Gideon Saar, have also been hesitant to seize on the issue, or on early signs of disagreement between Washington and Israel over Iran as proof that the prime minister is not fit to keep Israel secure.

There’s a simple explanation, and a more complicated one, for this unusual absence. First, the simple: Israelis do not yet know whether Mr. Biden will prove to be a friend, like his predecessor, or a thorn in their side, like the president he previously served under. Mr. Netanyahu cannot yet oppose him because so far he has done nothing objectionable, and alienating the White House for no good reason is beyond the pale even for a cynic like Mr. Netanyahu. The opposite is also true: Mr. Biden has not yet proved himself to be Israel’s friend as president, and so the prime minister’s rivals must be careful not to portray themselves as his admirers.

The more complicated explanation concerns America’s interest in the Middle East and the country’s relative irrelevance to much that is happening in the region. The United States was unsuccessful in its halfhearted quest to contain Iranian expansion; it was missing in action in the Syrian civil war; it bet on wrong horses during the so-called Arab Spring; it has alienated the Saudis, let Russia take over Libya and did nothing of value to resolve the Palestinian issue. The list goes on.

In fact, the only true achievement of the United States in the region in recent years is the Abraham Accords, the normalization agreement between Israel and the Gulf Arab countries, which was orchestrated by the Trump administration. But this significant move was achieved not as a triumph of the traditional American policy but because American diplomacy was on leave — temporarily occupied by the revolutionary troops of the Trump administration.

If America’s leaders are just tired of being involved in Israel’s never-ending political process, I can’t fully blame them. We Israelis are all tired of it, too. We would all wish for a little break. And yet, an Israeli election with no America as a background noise is disturbingly strange. Is this another proof that America is less interested in the country that much depends on its support? Are we being demoted?

In more than one way, the policy of the Biden administration seems to be moving along a trajectory that assumes a less central role for Middle East affairs in America’s foreign policy. So it’s quite possible that Israel’s needs are becoming less urgent and that who leads Israel matters less in the eyes of the United States. In such case, the proper election question for Israelis is no longer “Which leader could better deal with America?” but “Which leader can better manage without America?”

Shmuel Rosner (@rosnersdomain) is the editor of the Israeli data-journalism site TheMadad.com, a senior fellow at the Jewish People Policy Institute and a contributing opinion writer.