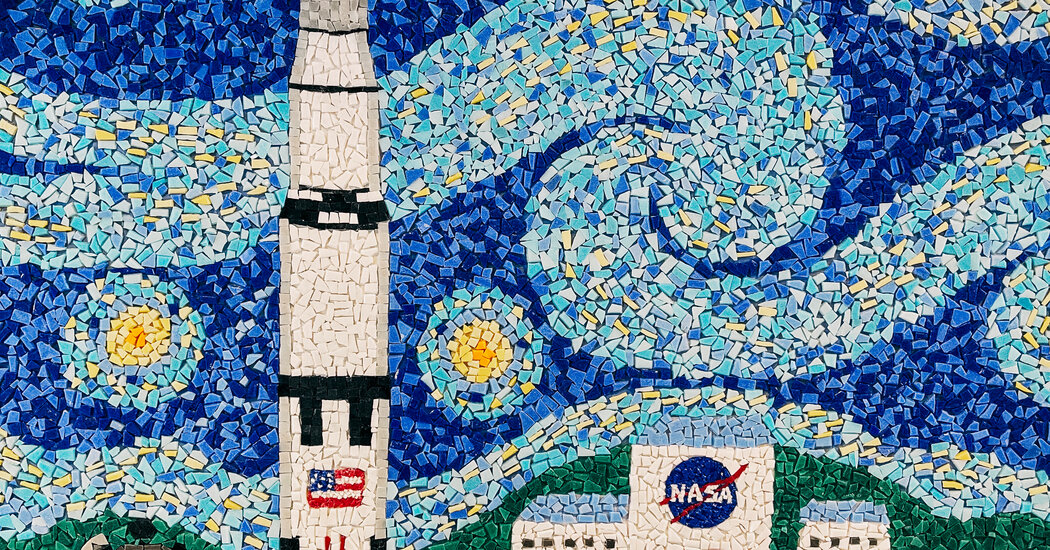 As uncommon as it is for the White House to worry about where the Pentagon puts its people and hardware, President Biden may need to follow the example of his predecessor and take a hard look at the site selection for U.S. Space Command. It tells a tale of two cities, Colorado Springs and Huntsville, Ala., and reveals a lot about our modern-day season of stunt guillotines and Trumpist revolutionaries.

The Trump administration’s decision to move Space Command — the Defense Department’s coordinating body for space-related military operations — from Colorado Springs to Huntsville came one week after the congressman from Huntsville, Mo Brooks, took the stage at President Donald Trump’s last-stand rally on Jan. 6, invoked the patriotic ancestors who “sacrificed their blood, their sweat, their tears, their fortunes and sometimes their lives,” and rasped at the crowd, “Are you willing to do what it takes to fight for America?”

Rumors of Trumpian quid pro quo ensued, especially from Aerospace Alley in Colorado, which seemed to have the advantage of incumbency over five other contenders. (Space Command was based in Colorado Springs from 1985 to 2002 and was deactivated for 17 years before being revived. It is not to be confused with Mr. Trump’s military legacy, Space Force, the littlest branch of the armed services.)

Was the Huntsville pick Mr. Trump’s thank-you to Mr. Brooks, the very first member of Congress to declare, in December, that he would challenge Mr. Biden’s victory on Jan. 6? Or perhaps bug off to Colorado for repudiating Mr. Trump along with Republican senator Cory Gardner last November?

The Defense Department’s inspector general has agreed to review the transfer, which won’t occur until 2026 at the earliest. But even if the study finds that Huntsville beat out Colorado Springs on the merits, would the Biden administration have cause to rescind the move? Or put another way, should law-abiding taxpayers be asked to send their government’s treasure to a district whose chosen representative was at the fore of the government’s attempted overthrow (or whatever that was)?

Roughly half of Huntsville’s economy already comes from federal spending, and most of that money is dedicated to the defense and security of the United States. Yet for 10 years, the city has been represented in Congress by an anti-government nihilist whose crusade has ultimately endangered democracy itself. The riot fueled by Mr. Brooks’s big lie of a stolen election also contributed to the death of one of his constituents and resulted in the arrest of another North Alabama man, a military veteran whose truckload of weaponry included machetes and a crossbow with bolts.

Reasonable Americans might ask whether our national security should be entrusted to a community in which a significant portion of the work force may not believe that Mr. Biden is the legitimate commander in chief. (When I asked Mr. Brooks by email whether he considered Mr. Biden the legitimate president, he did not answer the question.)

History advises that collective punishment is rarely a good teacher. That is why Huntsville should try to live up to its reputation as the forward-looking, high-tech standout in an underdeveloped Heart of Dixie and redeem itself through a little enlightened self-interest. As the 2020 election deniers found their precedent in the Compromise of 1877, which anointed President Rutherford B. Hayes and not coincidentally ended Reconstruction, Huntsville could begin a reverse process of self-Reconstruction by rejecting Confederate politics and bringing them in line with its Union purpose.

Huntsville has long had an exceptionalist attitude toward the rest of the state. Even Mr. Brooks plays into the local “most Ph.D.s per capita” urban legend as the nerd-demagogue with a degree in politics and economics from Duke.

There’s no question that Huntsville is competent to host Space Command. It has called itself the Rocket City since the 1950s, when Wernher von Braun and the German engineers who built Hitler’s V-2 rocket — the first long-range ballistic missile — were imported to make missiles for the U.S. Army. The group had switched over to NASA by 1961, when John F. Kennedy decided the United States should send a man to the moon, which happened in 1969, courtesy of the German-American team’s Saturn V rocket.

Huntsville’s Marshall Space Flight Center was the biggest of the Apollo-boom NASA installations in the so-called Space Crescent of federal money leveraged to the Southland — scything from Cape Canaveral, Fla., to the Manned Spacecraft Center in East Texas. The reason Houston gets to hear about the sorun is undoubtedly related to its being in the home state of Lyndon B. Johnson. Especially as a senator and as vice president, he helped shape the space program as an agent of economic reconstruction; he expected social progress to flow from it throughout the South. His presidency’s civil rights program, after all, was also framed in economic terms, as a War on Poverty.

Among the grinding obstacles to Johnson’s aspirations was George C. Wallace, Alabama’s “Segregation forever!” governor and Mr. Trump’s John the Baptist. In the fall of 1964, it was impossible in Alabama to vote to re-elect the sitting president. (Its Democratic electors were unpledged, meaning, basically, that they would vote in the Electoral College for whomever Wallace told them to.) 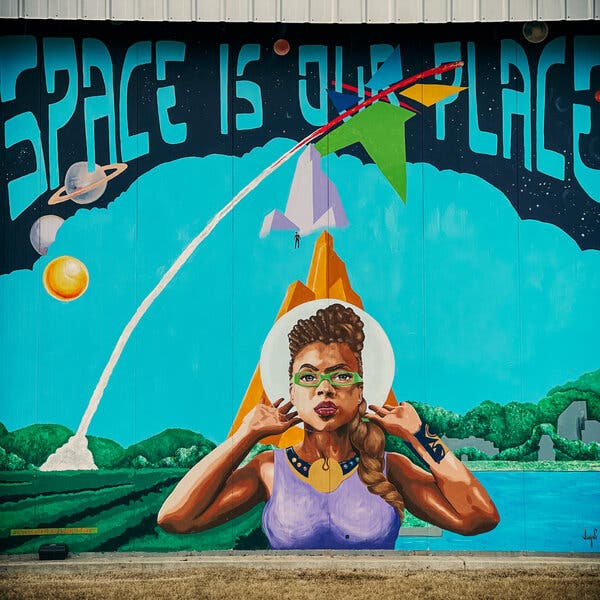 And so after a visit with Alabama business leaders that October, NASA’s head, James Webb, threatened to pull high-level Marshall personnel — and their portion of the multimillion-dollar payroll — out of the state. The practical reason was that von Braun could not recruit talent to a place so egregious on civil rights. And on a personal note, Webb was not crazy about how unappreciative Alabama was toward the government that fed it.

The reason you probably haven’t heard of them is that their more positive legacies were eclipsed by their racist votes. Still, when Johnson gave him permission to expediently oppose his poverty bill, Jones replied, “My conscience won’t let me.” Decades later, his successor Mr. Brooks consulted his conscience after the sacking of the Capitol and found that “fascist ANTIFA” was likely to blame.

Not surprisingly, the local committee of business leaders and state officials that wooed Space Command to Huntsville “did not coordinate our efforts with Congressman Brooks,” as a Chamber of Commerce spokesman told me by email. But historically, the educated, white-collar Alabamians that are Huntsville’s proud base have tended to regard their more deplorable politicians as harmless if not useful.

Consider one of Mr. Brooks’s largest donors, the law firm of McDaniel & McDaniel. One of its co-founders, Mark McDaniel, is a Democrat turned self-described “very moderate Republican” who currently recognizes the legitimacy of Mr. Biden’s election — “Oh, absolutely I do,” he told me, adding, “I don’t think it was a hoax, and Covid is real.”

Even so, he said he does not intend to “bail out on” his friend. “Mo Brooks is just a decent human being,” he said, plus the two guarded each other on rival basketball teams in high school. Shortly before Mr. Trump left office, Mr. Brooks announced the president’s appointment of Mr. McDaniel to a U.S. Agency for International Development advisory board.

And what of Mr. Brooks’s top corporate donors, including the household names of the military-industrial complex? Asked if they would follow the lead of the other brand-name companies that have pledged to withhold cash from Congress’s election-rejection caucus, Lockheed Martin and Boeing would not commit to anything beyond a pause in political contributions. Northrop Grumman did not respond to several inquiries.

As for the homegrown defense contractors behind Mr. Brooks — Radiance Technologies, Torch Technologies and Davidson Technologies — it may require some bottom-line blowback from the congressman’s free-enterprise extremism to make them appreciate the democracy that has so enriched them.

Perhaps they would take their representative more seriously if the Biden administration decided to take his anti-government rhetoric literally and withdrew — along with the 1,400-job prospect of Space Command — the Army Materiel Command, the FBI’s so-called second headquarters and NASA, which is overseeing the launch vehicle for the coming Artemis lunar missions (and employs Mr. Brooks’s son).

While the inspector general is evaluating the Space Command decision, Colorado Springs may want to order up some blue #usspaceCOm T-shirts to replace the MAGA red ones the local Chamber of Commerce distributed for Mr. Trump’s visit there last year. Colorado is hardly Alabama, what with two Democratic senators and an openly gay governor.

But Doug Lamborn, the congressman from Colorado Springs, is his state’s answer to Mo Brooks: anti-gay, anti-PBS, anti-“war on Christmas.” He voted against certifying Mr. Biden’s election on Jan. 6, after the Capitol was stormed by his constituents Klete Keller, who was an Olympic swimmer, and Robert Gieswein, who is suspected of being a Three Percenter.

Given the long reach of Trumpism and the reluctance of multinational defense industries to take a stand against even a hypothetical Senator Mo Brooks, Alabama is beginning to look like a state of mind without borders.

Diane McWhorter, who is writing a book about Huntsville and the Cold War space race, is the author of “Carry Me Home: Birmingham, Alabama: The Climactic Battle of the Civil Rights Revolution.”