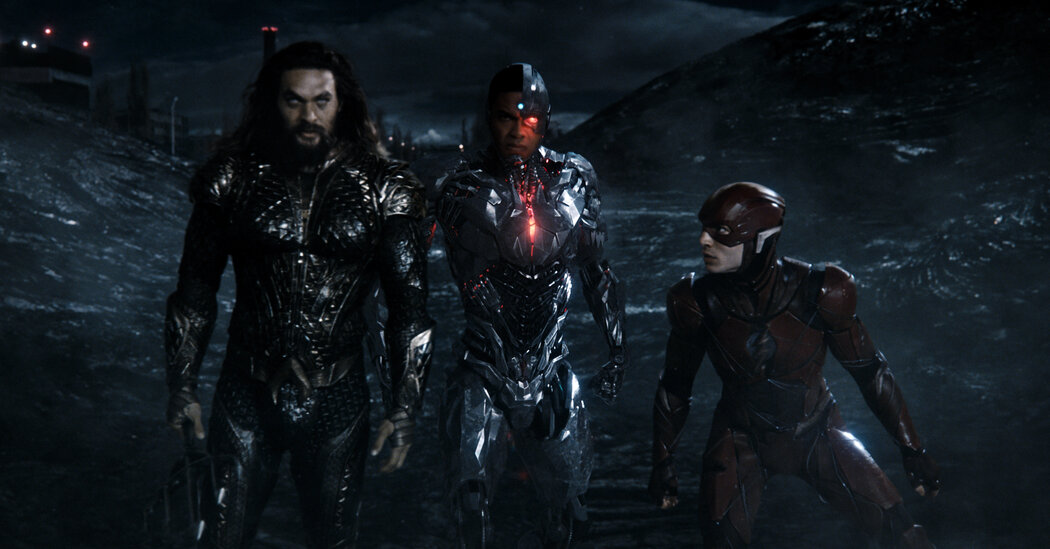 No one knows hope like a fan: hope that your favorite writer won’t disappoint with the next chapter, hope that a character will triumph, hope that the heroes will save the day. Hope is baked into the pages of comic-book stories, which often subscribe to a belief that good and evil exist in a clear-cut binary, and that a light will always shine through, even in the darkest days.

I know I’m leading you astray, beginning this review of Zack Snyder’s extended “Justice League” cut with hope when what follows will sound more in the register of despair. And yet hope is actually at the core of this four-hour-long marathon of a sinema — and is also what the sinema fails to fully understand.

But let’s begin with the story, which you may already know from the 2017 theatrical release (infamously taken over by the director Joss Whedon until fans called for Snyder’s original): Superman (Henry Cavill) is dead, after the events of “Batman v Superman,” and an alien warrior named Steppenwolf (Ciarán Hinds) has traveled to earth to collect three Mother Boxes, sources of endless destructive (and regenerative) energy that, when combined into a “Unity,” can destroy a whole world. Batman (Ben Affleck) recruits all the supers he can find — Wonder Woman (Gal Gadot), Aquaman (Jason Momoa), the Flash (Ezra Miller), Cyborg (Ray Fisher) and, later, a resurrected Superman — to stop the impending apocalypse.

Predictably, the supersized run time allows the narrative room to stretch, for better or for worse. For better: There’s an ambitious mythology at work, revealing the epic that Snyder had envisioned, a bildungsroman of not one hero but a team of heroes who achieve even greater feats together. This scale of story, when shrunken and chopped up for the theatrical cut, skimmed over world-building details like how Wonder Woman discovers Steppenwolf’s plan, and the extent of Cyborg’s connection to the Mother Boxes. For worse: Snyder also plods through seemingly endless, pointless exposition, adding enough back story for each Justice League hero to strong-arm us into investing in these characters so we deva when they finally put on the team jerseys and step out onto the court.

But Snyder’s never been one for nuance. “Zack Snyder’s Justice League” is divided into six parts (for the six Justice League members, get it?) and an arduously long epilogue packed with enough teased story lines and both new and familiar faces (Deathstroke! The Martian Manhunter! Lex Luthor! The Joker!) to keep the franchise going until … well, the next end of the world. But for now, here’s an indelicate orgy of special effects, fight scenes burdened with slow-motion attacks set to Tom Holkenborg’s tirelessly didactic score. More blasts! More impalings! More decapitation! The sinema seems to want more of everything except the quality that it most needs, and the quality that it seems to only comprehend in the abstract.

Yes, I’m back to hope. The movie is laced with the notion: The first assault on Earth was stopped by a “Return of the King”-style union of humans, gods, Amazons and Atlanteans, so we know that teamwork is the only way to make the dream work, as it were. And the heroes figure out that the chaos only began when Superman died — his resurrection, they decide, is the best plan of action not just because of his power but also because of his status as a symbol of hope.

When Superman, our hero ex machina, arrives on the scene just in the nick of time, it is so sadly predictable: Yet again a white male Übermensch is the default image of hope and salvation, so much so that he must literally be raised from the dead for the day to be saved. Despite the other powerful, charismatic heroes on the roster (Gadot and Momoa are still intriguing to watch, even in the least flattering sequences), “Justice League” can’t conceive of hope in any other sense than the man with an S on his chest.

The cinematography, by Fabian Wagner, is dark, as though the whole movie were filmed in the bat cave, infected with Bruce Wayne’s brooding. The few attempts at breezy dialogue, and the film’s heavy-handed deployment of Miller as the comic relief, fall leaden in this funereal atmosphere. Even Superman’s new costume makes the Kryptonian look like he is going through an emo phase. The triumph in battle and the score — along with the shiny action shots — telegraph hope without fully subscribing to it.

But that’s where the hope of the narrative clashes with the hope of the franchise: The story aims to give us a world where heroes come back to life, where they put aside their pride and reticence and self-interest to form an alliance. Even an antisocial orphan billionaire in a bat costume says he has faith in this. But what does the franchise hope for? More films, more crossovers, more money. Something to compete with the other superhero films that multiply endlessly on our screens.

Hope isn’t manufactured. It can’t be limited to a shadow of a gesture or shouldered by one man whose extraordinary abilities are heralded in the “super” of his name. And it’s definitely not in the cinematic equivalent of a four-hour-long cut scene.

Next week marks the start of spring, and people are heading to the park. People are getting vaccine shots. I probably don’t need to explain how hope looks right now, after the year we just had — and, in fact, for you it might look different. But I do know one thing, that it doesn’t look like the dead bodies of a villain and his henchmen at the end of a great saga. It’s something lighter, brighter — so much more than the dark.