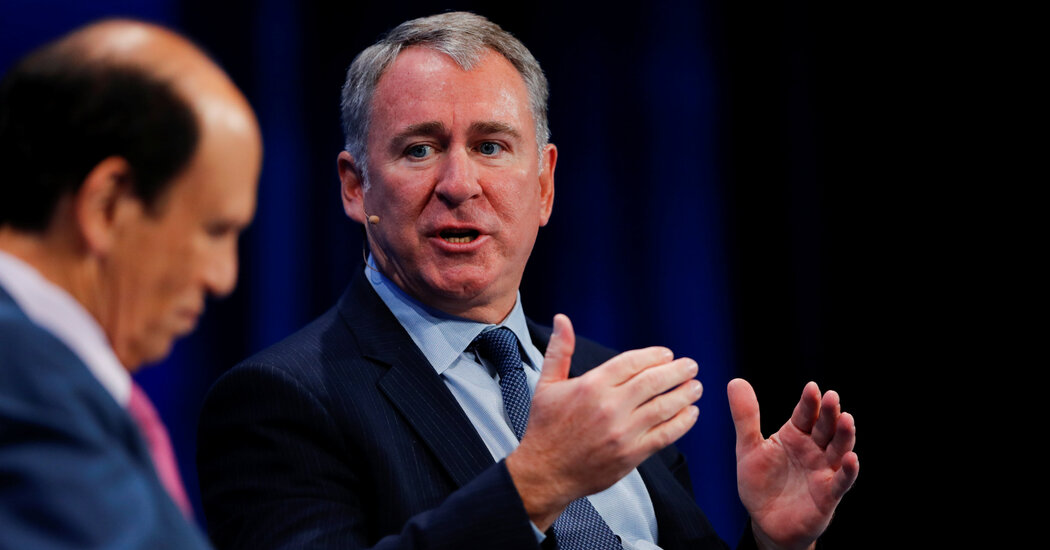 The GameStop saga was a David-versus-Goliath story pitting small traders against big hedge funds and a cautionary tale about what happens when fast-moving Silicon Valley collides with the heavily regulated world of Wall Street.

Among its ensemble cast is one of the finance world’s most influential — and perhaps least visible — figures, the Chicago billionaire Kenneth C. Griffin.

And when the House Financial Services Committee meets on Thursday to question key players in the GameStop madness, Mr. Griffin will be asked about the two distinct roles his companies played in a two-week trading frenzy that created and destroyed billions of dollars in wealth.

The first business, Citadel, is a hedge fund firm that had placed a small bet that GameStop shares would fall. It suffered when the shares rose because millions of small investors began buying up the stock, but not nearly as badly as another hedge fund, Melvin Capital, which took a $2 billion investment from Citadel and some of its employees to shore up its finances.

The second business, Citadel Securities, is a brokerage that says it routes more than a quarter of all stock trading in the United States. As small investors were furiously buying and selling GameStop shares — many through trading apps such as Robinhood — Citadel was doing brisk business. It pays Robinhood and other retail brokerages to handle those orders, and makes money by pocketing tiny price discrepancies between buy and sell orders that quickly add up.

“Citadel is one of the many really gigantic financial firms that are incredibly important and interwoven throughout the financial system but are never visible to the public,” said Dennis M. Kelleher, president and chief executive officer of Better Markets, a nonprofit group that supports additional financial regulation. “They operate in the shadows and want to stay in the shadows and don’t want anyone looking at how they conduct their business.”

On Thursday, lawmakers will put a spotlight on Mr. Griffin. He is scheduled — along with the chief executives of Robinhood and Reddit, the social media site — to testify before the House committee about the GameStop rally. Also on the witness list is Keith Gill, a Reddit user and YouTube poster who made millions off the GameStop trade he helped popularize, and Gabe Plotkin, the founder and chief executive of Melvin, who was so badly squeezed he accepted Citadel’s help.

In particular, Mr. Griffin will have to address speculation that he used his firms’ involvement to manipulate the situation for his own benefit. Small investors who were irritated that Robinhood put curbs on GameStop trading have suggested that Citadel was behind the limits, applying pressure to Robinhood to protect its own bet against the görüntü game retailer — assertions that both Citadel and Robinhood have denied.

“There’s a giant pachyderm running around, and that’s the insane theory that we induced Robinhood or any other firm to impose trading restrictions on GameStop,” Mr. Griffin said in an interview on Wednesday. “Never in my life have I seen such a completely absurd theory.”

Representative Maxine Waters, the California Democrat who leads the committee, said the hearing — the first of three she has planned — would be a fact-finding mission.

“They will tell their story,” she said of Citadel and the other witnesses. “We hope the hearing will give us some facts, and a very clear understanding of who did what.”

For Mr. Griffin, who began trading as a sophomore at Harvard, the answer to such questions will depend on precisely which arm of his financial empire officials are asking about.

Citadel — the hedge fund — had only limited holdings of GameStop and other “meme” stocks that surged last month. As of Jan. 22, the Friday before GameStop went through the roof, Citadel’s bet against GameStop was limited to just 92 shares, said a person familiar with the firm’s position at the time. But after GameStop started soaring, Mr. Griffin — one of the financial world’s savviest operators — spotted an opening at the beleaguered Melvin.

One of Mr. Griffin’s lieutenants called Mr. Plotkin to express an interest in investing, Mr. Griffin said. By day’s end, Citadel and Melvin had a handshake deal. Citadel and some of its senior managers would buy a stake of less than 10 percent in Melvin for $2 billion in cash, said a person familiar with the details of the transaction, who was not authorized to disclose confidential details of it. That money, along with $750 million from the hedge fund Point72, allowed Melvin to weather heavy losses as GameStop — a stock it had bet would fall — soared more than 600 percent.

Melvin’s losses were stunning: 53 percent in January. Citadel, which by then had a small exposure to Melvin’s losses and a loss on its own GameStop investment, was down 3 percent. (The S&P 500 was down 1.1 percent for the month.)

But the opportunity that GameStop’s rise presented to Mr. Griffin’s hedge fund is entwined with the other role his companies played, in particular Citadel Securities. And it is here that aggrieved investors have smelled a conspiracy.

On the morning of Jan. 28, Robinhood, the Silicon Valley start-up that had become a go-to destination for small investors, curbed the selling of GameStop and a few other stocks. The reasons were not fully explained, and they had the immediate effect of reversing the rally.

Users were furious — first with Robinhood, and then with Citadel.

Some amateur traders, knowing that Citadel had already invested in Melvin and that Citadel Securities ran a huge trading operation of which Robinhood was a customer, jumped to conspiracy theories online. (The arrangement, known as “payment for order flow,” allows users on Robinhood and other apps to trade for free.)

“Had no idea that Citadel had it’s hands in so many pockets!!” a commenter wrote on Reddit’s Wall Street Bets forum on Jan. 31. “Keep in mind they own a portion of Melvin capital! They’ve tried to rig the market against us.”

Mr. Griffin said he and his team were paying little attention to the online chatter because they were occupied with the enormous flood of trades. On Jan. 28, for example, Citadel Securities handled trades totaling 7.4 billion shares — roughly the same as the entire stock market volume on a given day in 2019.

But evvel Mr. Griffin realized the reputational risk of the rumor mill, he put out statements from both firms to deny any role in Robinhood’s decision to limit trading.

Citadel Securities had no commercial reason to want to slow or stop the trading, Mr. Griffin and other company officials said, because of its business model. The company collects the tiny gap between a buy and sell price on an individual stock order as a fee, and slower trading limited Citadel Securities’s ability to make money.

But the vitriol aimed at Citadel has not abated, even after Robinhood’s chief executive, Vlad Tenev, came forward with the reason for the slowdown: The heavy trading in a wildly swinging stock by Robinhood’s users meant it needed to make a hefty safety-net payment to the industry-run clearinghouse that finalizes trades.

Thursday’s hearing may yield more details about what transpired inside the companies so closely tied to the GameStop rally, but it is also likely to feature populist anger from both parties, directed at both Robinhood and the short sellers who targeted GameStop.

Representative Alexandria Ocasio-Cortez, a New York Democrat and a member of the Financial Services Committee, called Robinhood’s decision to halt some trades for GameStop in January “unacceptable.” And Representative Rashida Tlaib, a Michigan Democrat on the committee, called the decision “beyond absurd” and accused the app of “blocking the ability to trade to protect” hedge funds.