Allan Burns, a leading television writer in the 1970s and ’80s who helped create the groundbreaking hit sitcom “The Mary Tyler Moore Show” and its dramatic spinoff, “Lou Grant,” died on Saturday at his home in Los Angeles. He was 85.

His son Matthew said the causes were Parkinson’s disease and Lewy body dementia.

“Allan’s range was like nobody’s,” James L. Brooks, his partner in creating Ms. Moore’s series, said in a phone interview. “I don’t think you ever get an absurdist, a legitimate humorist and a feeling person in one package.”

In 1969, Mr. Burns and Mr. Brooks were working on “Room 222,” a comedy-drama series set in a Los Angeles high school, when Grant Tinker, Ms. Moore’s husband, asked them to create a series for her. Their first concept was that she play a divorced woman who worked as a reporter for a gossip columnist.

“We ran it past Mary and Grant and they absolutely loved it,” Mr. Burns said in an interview for the Television Academy in 2004.

But Mr. Burns said that during a meeting he and Mr. Brooks attended at CBS headquarters in Manhattan, a research executive told them there were four things American audiences “won’t tolerate”: New Yorkers, Jews, divorced people and men with mustaches.

“What do you do with that?” Mr. Burns said in the interview. “We were dismissed.”

Mr. Burns and Mr. Brooks quickly turned the series’ setting into a TV newsroom and Ms. Moore’s character, Mary Richards, into a woman who had never been married and had just ended a long-term relationship. 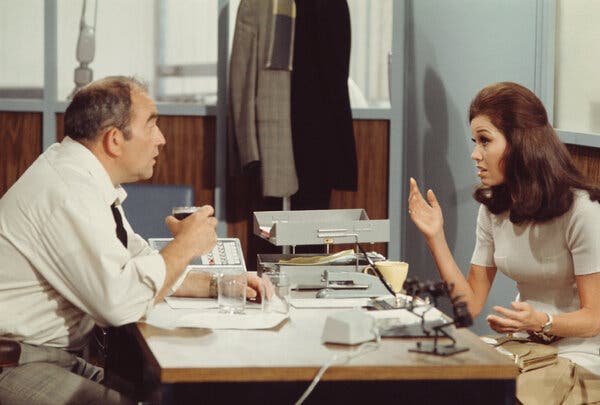 “The Mary Tyler Moore Show” — set largely at WJM-TV in Minneapolis and in Mary Richards’s apartment — was praised for Ms. Moore’s portrayal of a single working woman, and for its writing. The series ran from 1970 to 1977 and won 29 Emmy Awards; Mr. Burns shared in five of them.

“Allan could channel the character of Mary Richards,” Mr. Brooks said. “He gave us a sense of her by the way he talked about her.”

In the late 1970s, Mr. Burns started branching out into films. He wrote the screenplay for “A Little Romance” (1979), starring Laurence Olivier and Diane Lane, which was nominated for an Academy Award, and for “Butch and Sundance: The Early Days” (1979), a prequel to “Butch Cassidy and the Sundance Kid” (1969). He also wrote and directed “Just Between Friends” (1986), with Ms. Moore, Ted Danson and Christine Lahti. It was his only film as a director.

Mr. Burns directing Christine Lahti in “Just Between Friends” (1986), which he wrote and directed. It was his only film as a director.Credit…Orion, via Everett Collection

And he continued to develop sitcoms. In the 1980s, he created or helped create three short-lived comedy series: “The Duck Factory,” which starred Jim Carrey as an animator; “Eisenhower and Lutz” about a shiftless lawyer played by Scott Bakula, and “FM,” set in a public radio station.

In his review of “Eisenhower and Lutz,” John O’Connor of The New York Times wrote of Mr. Burns, “He cannot only whip up generous batches of clever dialogue but is also extremely clever with staging bits of comic business.”

Allan Pennington Burns was born on May 18, 1935, in Baltimore. His father, Donald, was a lawyer. His mother, Paulene (Dobbling) Burns, was a homemaker who became a secretary after her husband died when Allan was 9. Three years after that, she and Allan moved to Hawaii, where his older brother, Donald Jr., was stationed at Pearl Harbor.

While attending Punahou School in Honolulu, Allan contributed cartoons to The Honolulu Star-Advertiser. He used his drawing talent while studying architecture at the University of Oregon. He dropped out during his sophomore year in 1956 and moved to Los Angeles, where he was hired as a page at NBC and later became a story analyst. After being laid off, he began writing and illustrating greeting cards while trying to find work at an animation studio.

He found a job at Jay Ward Productions, which produced “Rocky and His Friends,” the satirical cartoon series about the adventures of Rocky and Bullwinkle (more formally, Rocket J. Squirrel and Bullwinkle J. Moose). Mr. Burns appeared unannounced at Mr. Ward’s office on Sunset Boulevard, toting his portfolio of greeting cards. Mr. Ward leafed through the cards, chuckled and quickly hired him.

Mr. Burns wrote for the moose, the squirrel and other characters on “The Bullwinkle Show.” He also developed the character Cap’n Crunch for Quaker Oats, which had hired Mr. Ward’s company to create a mascot for a new cereal.

After he and his colleague Chris Hayward left Mr. Ward in 1963, they created “My Mother the Car,” a sitcom that starred Jerry Van Dyke, with Ann Sothern as the voice of his mother, who has been reincarnated as a vintage Porter automobile and speaks only to him. A notable flop considered by some to be one of TV’s worst shows, it was canceled after one season.

In 1967 and 1968, Mr. Burns and Mr. Hayward worked on the only season of the sitcom “He & She,” in which the married couple Richard Benjamin and Paula Prentiss played a comic book artist and his wife, a social worker. Mr. Burns shared his first Emmy with Mr. Hayward for one episode.

After “He & She” was canceled, its producer, Leonard Stern, brought them to the espionage parody, “Get Smart,” another series he produced, then in its fourth season. “Room 222” and “The Mary Tyler Moore Show” soon followed.

In addition to his son Matthew, Mr. Burns is survived by his wife, Joan (Bailey) Burns; another son, Eric; and seven grandchildren.

Mr. Asner, who worked for Mr. Burns on both “The Mary Tyler Moore Show” and “Lou Grant,” recalled him in an interview as a gentlemanly boss.

“He was a guide and mentor, and I loved him,” he said. “Jim Brooks was the bouncing-off-the-walls part of the team, and Allan was the stabilizer.”