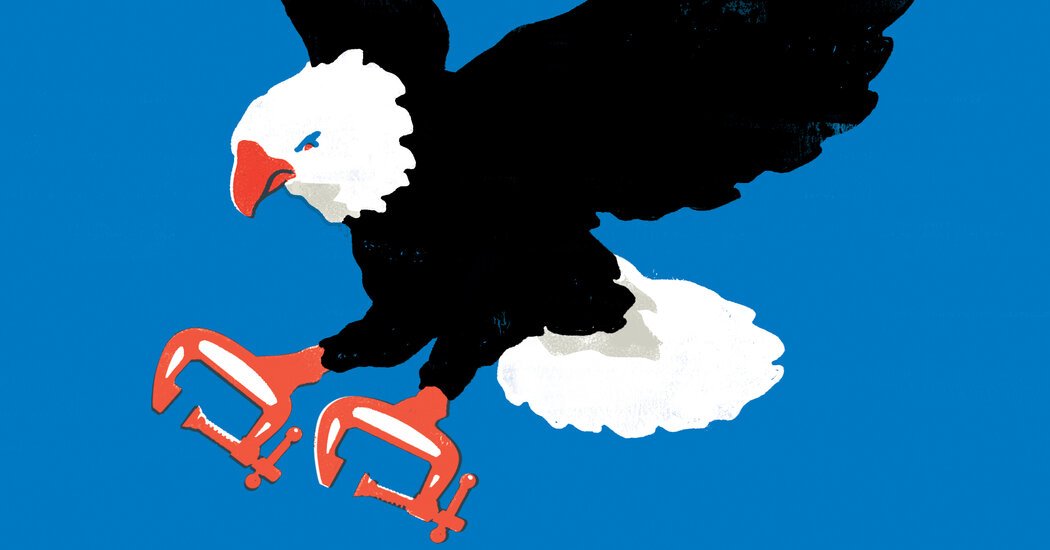 “It is past time,” Joe Biden pledged last year, “to end the forever wars.” He’s right. But his definition of war is too narrow.

For decades, the United States has supplemented its missile strikes and Special Operations raids with a less visible instrument of coercion and death. America blockades weaker adversaries, choking off their trade with the outside world. It’s the çağdaş equivalent of surrounding a city and trying to starve it into submission. Wonks call this weapon “secondary sanctions.” The more accurate term would be “siege.”

America launched its first post-Cold War siege in 1990, after Saddam Hussein invaded Kuwait. For the next 13 years, Iraq — which before the war had imported roughly 70 percent of its food and medicine — needed United Nations approval to legally import anything. Claiming that everything from water tankers to dental equipment to antibiotics might have military use, Washington used its muscle at the U.N. to radically restrict what Iraq could buy. In her book, “Invisible War,” the Loyola University professor Joy Gordon notes that between 1996 and 2003, Iraq legally imported only $204 per person in goods per year — half of the per capita income of Haiti. After resigning to protest sanctions in 1998, the U.N.’s humanitarian coordinator in Iraq, Denis Halliday, warned, “We are in the process of destroying an entire society.”

The U.N. ended its blockade of Iraq when the United States invaded in 2003. Since then, Washington has often claimed to employ “targeted” sanctions, which restrict arms sales or penalize only specific officials or companies, not entire populations. And in some instances, the sanctions are indeed targeted. But in the case of a few select foes — Iran, Venezuela, North Korea, Cuba and Syria — the United States has initiated or intensified sieges that contribute to the same kind of misery experienced in Iraq.

The justifications for these sieges vary: nuclear proliferation, terrorism, violations of human rights. The method, however, is similar: “secondary sanctions.” The United States doesn’t just blacklist individuals, businesses, government institutions or even entire sectors of an adversary’s economy, which can be damaging enough. It tells foreign banks and corporations to do so as well — or else be barred from doing business with the United States.

The penalties for violating America’s secondary sanctions can be stunningly harsh. After charging the French bank BNP Paribas with flouting American sanctions laws, prosecutors in 2014 forced the bank to hisse almost $9 billion in fines.

In theory, these sanctions — like the embargo against Iraq in the 1990s — contain exemptions for humanitarian goods. But, in practice, as Human Rights Watch has detailed, the exemptions are often murky and cumbersome. To avoid running afoul of American law, many foreign banks and businesses cease trading with besieged countries altogether.

In 2018, the Los Angeles Times reported that one of Syria’s largest public hospitals was struggling to buy spare parts for its MRI machines and CT scanners because, as a U.N. report concluded, “private companies are unwilling to jump the hurdles necessary to ensure they can transact with Syria without being accused of inadvertently violating” American and other sanctions. Last spring, as the coronavirus raged out of control in Iran, Senator Chris Murphy of Connecticut warned that sanctions were “making it very hard, if not impossible, for medical supplies to reach” that country as well. In 2019, a California-based charity complained that it could not send wheelchairs, crutches or canes to North Korea.

Again and again, human rights groups like Amnesty International and humanitarian organizations like UNICEF have denounced America’s blockades. In 2019, the United Nations General Assembly condemned the United States’ embargo against Cuba by a vote of 187 to 3. In Washington, however, these sieges are cause less for shame than for self-congratulation since they signal America’s opposition to oppressive governments.

The sorun with this moral logic is that besieging an oppressive regime usually harms not the oppressor but the oppressed. In a 2019 study, the economists Antonis Adam and Sofia Tsarsitalidou found that when the United States sanctions an autocratic government, civil liberties get worse. A 2020 article in the Journal of Development Studies found that both American and United Nations sanctions lead to lower life expectancy. As the political scientists Dursun Peksen and Cooper Drury have explained, dictators respond to embargoes by hoarding scarce resources, and using them to reward their cronies and starve their opponents, thus further entrenching their power. “They think they are hurting President Maduro,” a Venezuelan woman whose child couldn’t get epilepsy medicine told the German publication Deutsche Welle in 2019, “and they’re really hurting the people.”

America’s sieges might be more defensible — or at least briefer — if they stood a reasonable chance of success. The sanctions on Iran that the United States and the U.N. imposed during Barack Obama’s presidency harmed ordinary Iranians. But their intent was to convince Iran’s government to compromise on its nuclear program, not utterly capitulate, or give up power. And, arguably, they helped achieve that relatively modest goal.

By contrast, none of America’s current sieges are married to remotely realistic objectives. Despite America’s efforts to oust them, Mr. Maduro and President Bashar al-Assad of Syria are more firmly in control today than when the United States imposed its harshest sanctions. After more than a decade of escalating punishments aimed at pressuring North Korea to give up its nuclear weapons, that nation possesses as many as 60 of them. Iran is closer to the bomb than it was when the Trump administration’s “maximum pressure” campaign began, and just as influential across the Middle East.

Despite this, America’s other forever war retains substantial bipartisan support. That’s especially true in Congress, where politicians who have lost their appetite for deploying troops see an apparently cost-free way to signal their opposition to repressive and adversarial governments — and don’t deva if the real costs are borne by the suffering people they claim to support.

To its credit, the Biden administration is reviewing whether sanctions are “unduly hindering responses to the Covid-19 pandemic.” But the agony caused by America’s sieges didn’t begin when the virus hit, and won’t end when it passes.

Mr. Biden wants to re-enter the Iran nuclear deal, which would entail lifting nuclear sanctions on Tehran. However, Secretary of State Antony Blinken has promised that America’s numerous non-nuclear sanctions will remain. He has called the 2019 law that threatens foreign companies doing business in Syria with secondary sanctions a “very important tool.” He’s proposed that the United States “more effectively target” sanctions on Venezuela, yet suggested that America’s siege of North Korea — which has forced multiple international charities to leave the country — isn’t tough enough.

Why are policies that have proved so ineffective and immoral so hard to undo? Because abandoning them would require admitting hard truths: North Korea will not abandon its nuclear weapons. Iran will remain a regional power. Mr. Assad, Mr. Maduro and the Communist government in Havana aren’t going anywhere. America’s leaders would rather punish already brutalized populations than concede the limits of American power.

But by deluding themselves about the extent of America’s might, they are depleting it. A key source of America’s power is the dollar, which serves as the reserve currency for much of the globe. It’s because so many foreign banks and businesses conduct their international transactions in dollars that America’s secondary sanctions scare them so much. But the more Washington wields the dollar to bully non-Americans into participating in our sieges, the greater their incentive to find an alternative to the dollar. The search for a substitute is already accelerating. And the fewer dollars non-Americans want, the harder Americans will find it to keep living beyond their means.

Ideally, America would stop besieging weaker nations because it hurts them. Unfortunately, we’re unlikely to stop until it hurts us.

Peter Beinart (@PeterBeinart) is professor of journalism and political science at The Newmark School of Journalism at The City University of New York. He is also Editor-at-Large of Jewish Currents and writes The Beinart Notebook, a weekly newsletter.