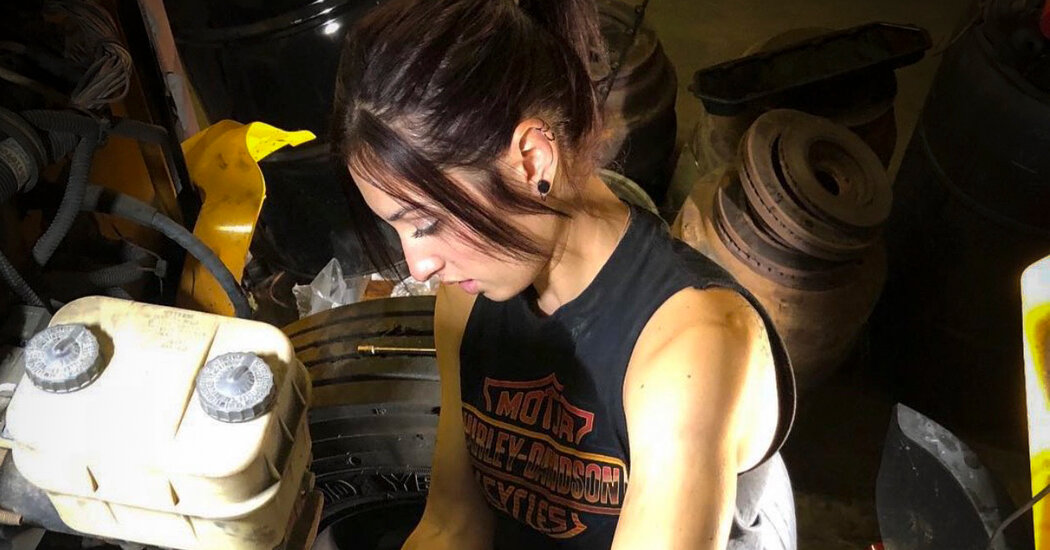 Ms. Combs was “a pioneering goddess,” said Sana Anderson, who battled the stereotypes and skeptics in her life to follow her own dream working as a diesel technician focusing on heavy-duty trucks and trailers. Ms. Combs was a hero to Ms. Anderson, 27, and countless other women.

“She fit so naturally in the trades — like the way it should be,” added Ms. Anderson, who lives in Beach Park, Ill., north of Chicago. “She tried so many different things and had so many skills. Isn’t that everything we want for our youth?”

Heather Holler had her eyes on semipro soccer, a dream derailed by surgery. When she competed at an autocross event for the first time in 2009, a whole new world opened up.

She bested her boyfriend at the time, and “I sold my S.U.V. two weeks later and bought my car,” she said.

Ms. Holler, a Nevada native who now lives in Germany, added: “Not knowing anything about cars, though, I bought a car with a blown engine.” She went to the Universal Technical Institute in Sacramento to learn to fix it. 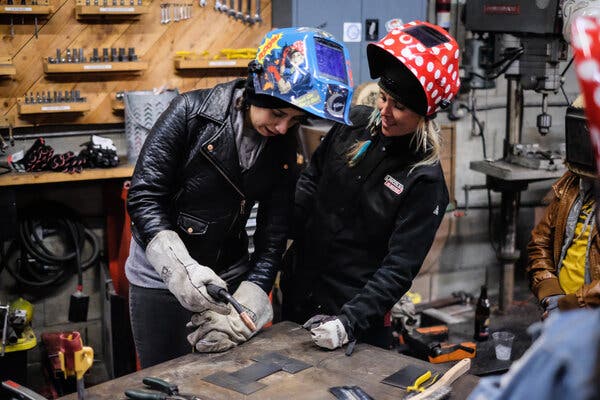 She watched Ms. Combs on the “Xtreme 4X4” TV show every morning before work. “I first learned who Jessi was when I started getting into cars,” she said.

Graduating in 2012, Ms. Holler became a full-time mechanic for Subaru Motorsports USA. Between events, she helped build a rally car for Bucky Lasek, a top racer. She was also the top mechanic at the DirtFish Rally School, and rang in 2021 by becoming a mechanic for the Hyundai Motorsport GmbH World Rally Championship test team in Germany.

Eliza Leon, a concierge specialist at Manheim Auto Auction in El Paso, comes from a long line of blue-collar tradesmen. Her father was a diesel mechanic for heavy equipment and earth movers. Her maternal grandfather and uncles were also diesel mechanics and four-wheel-drive enthusiasts. Ms. Leon grew up in Texas “helping my grandpa and uncles with their off-road trucks or tractor-trailers,” she said.

Ms. Combs “was everything I wanted to grow up to be,” Ms. Leon said. “She was smart, savvy, educated in the auto field, a talented fabricator, hardworking and so personable.”

A little over a decade later, in 2014, Ms. Leon met her television mentor at the Specialty Equipment Market Association Show in Las Vegas, better known as SEMA. “She was everything I hoped she’d be: gracious, kind and genuinely interested in what I had to say,” she said.

They reconnected five years later via Instagram and phone calls. “Her work ethic, her drive, her love for the trades is unrivaled,” Ms. Leon said. “She changed the industry for the better, and, more so, she inspired so many more to keep her work going. That is a true testament of what she stood for.”

During Ms. Leon’s 14-year career, she has been a technician, a shop service writer, an auto damage appraiser, an off-road vehicle builder, a fabricator and a TV personality herself, on “Xtreme Off-Road.”

“The more you work on vehicles the more you learn,” she said. “The technology is always evolving, so it’s a never-ending classroom.”

Eliza Leon prepping the frame on a 1953 Jeep.Credit…Priscilla Leon

And so Ms. Combs’s legacy lives on, in women like Ms. Leon, Ms. Holler and Ms. Anderson, and in organizations like Real Deal Revolution and the Jessi Combs Foundation.

Beyond the Combs automotive family tree are a variety of programs, trade groups and social media pages that support women pursuing automotive careers, from welding to wrenching, fabricating to painting.

Ms. Anderson, a first-generation American with a Polish mother and Pakistani father, is intent on inspiring other women. She’s quick to offer advice on the “highs and lows” of being a woman in the industry. “All the hard times have been and will be worth it,” she said.

While she has some schooling, she said, hands-on experience is the best teacher. “I have learned the most during my time in the shop,” Ms. Anderson said.

All the women said it was necessary to have a thick skin and be able to adapt to uneasy situations, which are unfortunately not infrequent, as they can be in any workplace.

According to a Deloitte and Automotive News survey, women make up only a quarter of automotive manufacturing workers in the United States. That field is also heavily white, according to federal statistics. In automotive repair and maintenance, not even 10 percent of the one million or so workers are women.

Ms. Leon found that if she armed herself with education and more credentials, she could stand her ground. Banter would quiet when she asked the offenders if they would say discriminatory things to their male co-workers or tolerate harassment of their daughter, mother or wife. Carefully navigating tricky situations, trusting your work and “looking for that shop that will stop the bullies,” she said, will give women confidence in their careers.

For Ms. Anderson, “the biggest challenge was from myself,” she said. “There were so many opportunities I passed up when I was younger because I didn’t have a backbone.” Every mistake she made she felt was magnified because she was a woman. “I didn’t want to let anyone down — especially being a girl.”

The unofficial help that women offer one another is inspiring, but there are also scholarships in the field. The Jessi Combs Foundation recently awarded a total of $30,000 to seven women, including Ms. Anderson and Ms. Holler.

“Those of us who came together to carry on her mission knew that individually none of us could carry her torch, but together we had a chance,” said Steven Elmes, the chairman of the foundation’s board and a friend of Ms. Combs. “Jessi was extremely proud of her background in the trades and the doors it opened for her — or she kicked in,” he said.

Another board member and friend, Dana Wilke, said: “Jessi’s brand of female empowerment was ahead of its time. It was not enough to Jessi to ‘win.’ She made it her mission to succeed while bringing others along with her.”

Each year the SEMA Businesswoman’s Network awards a Jessi Combs Rising Star Scholarship to a woman under 30. The group also hosts online seminars geared to all levels of women in the industry, and it makes resources available via social media and its website.

Events and workshops for women in the industry are held throughout the year. Real Deal Revolution teaches women and girls about automotive trades like welding and pinstriping. Founded by Ms. Combs and Theresa Contreras (president, designer and custom painter at LGE-CTS Motorsports), this nonprofit provides training to help women gain confidence.

Women in the industry are generous with advice. Sarah Lateiner of MotorTrend’s “All Girls Garage” show is active on social media. On Instagram, her Bogi’s Garage page hosts weekly happy hours interviewing women throughout the industry.

Pa’Trice Frazier, whose Weld Jointed website calls her the only Black female welding instructor in the Philadelphia area, educates people from all walks of life about welding. People can attend her seminars, enroll in full-semester welding programs and learn about career opportunities.

“Welding is a dying craft that can be saved by people like myself,” Ms. Frazier said. “Being a Black female in this industry is showing that times are changing.”

The women inspired by Jessi Combs wouldn’t want any other career, but they’re aware of the hurdles for women. “Knowledge is your foundation, credentials your armor and your grit,” Ms. Leon said. “That’s what gets you through the fight, and, well, it’s worth it.”

Ms. Holler had this advice: “It’ll be scary at times. You’ll get embarrassed at times. Get uncomfortable. Go learn. Don’t be afraid to tell someone you don’t know something. Accept the fact you’re human. Learn from your mistakes. Oh, and if you have to borrow a tool more than twice, buy it.”