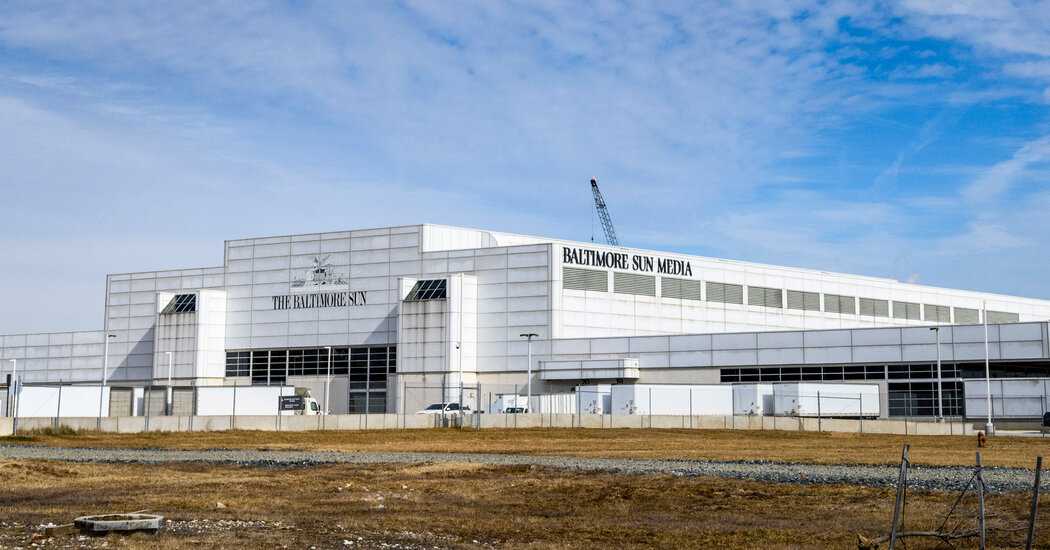 With the announcement on Tuesday that he had agreed to establish a nonprofit to buy The Baltimore Sun and other Maryland newspapers, the hotel magnate Stewart W. Bainum Jr. is set to go the route of Jeff Bezos, who went into the struggling newspaper business in 2013 by buying The Washington Post after making his fortune in another industry.

Journalists in Maryland, where Mr. Bainum, 74, was born and raised, have cheered his decision to go into newspaper publishing. Not only did he agree to take the papers away from their current owner, Tribune Publishing, a chain that has struggled for more than a decade, but he is poised to save them from being part of a deal that will give full ownership of Tribune to Alden Küresel Capital, a hedge fund known for slashing costs at the newspapers it controls.

“I think he’s going to try to use The Sun to show people newspapers can be successful even in this media environment,” Timothy F. Maloney, a Maryland lawyer and longtime friend, said in an interview.

Mr. Bainum (pronounced BAY-num), who declined to comment for this article, is the chairman of Choice Hotels International, one of the largest hotel chains in the world. A onetime family business now traded publicly, it has 12 brands, including Comfort Inn, Rodeway Inn, Quality Inn and MainStay Suites.

When Mr. Bainum became the chairman and chief executive in 1987, the company had 290 hotels. Now it comprises roughly 7,100 locations in more than 40 countries and territories, according to its website. For a time, he was also the top executive of Manor Deva, a nursing home chain started by his father.

He was born in Takoma Park, Md., a suburb on Washington’s northeastern border, about 30 miles down Interstate 95 from Baltimore. His father ran a plumbing business and drove a cab, and Mr. Bainum was born in the basement of an apartment house, he said in a 2019 interview with Hotel Management magazine.

Later his father built up the hotel company and the nursing home business. Mr. Bainum became an executive at the hotel chain in 1976. He said he considered himself fortunate for having a family enterprise to fall back on.

“I was born on second base,” he said in the Hotel Management interview. “My dad had a business, and he taught me the business as we went. And I was lucky.”

A lifelong Democrat who donated to the Obama and Biden presidential campaigns, Mr. Bainum had interests outside of business that led him to serve in Maryland’s legislature from 1979 to 1987. He was also the Democratic nominee in a House district in suburban Washington in 1986, losing to Constance A. Morella, a Republican. In 1994, he publicly flirted with a gubernatorial run.

He is married to Sandy Bainum, an actress and a singer he met after seeing her in a Broadway production of the musical “42nd Street.”

While in politics, Mr. Bainum had a good relationship with reporters, said John Feinstein, the best-selling sports author and Washington Post sports columnist, who covered the statehouse for part of the 1980s. Mr. Bainum called reporters “Chief,” Mr. Feinstein recalled.

“He never acted like a rich guy, even though, clearly, he was,” Mr. Feinstein said.

A resident of Chevy Chase, Md., just outside Washington, Mr. Bainum has had The Sun delivered to his home for years and began to worry about the paper as its print edition grew thinner over the years, said Jim Friedlich, the chief executive of the Lenfest Institute for Journalism, the nonprofit that owns The Philadelphia Inquirer. Mr. Friedlich added that he first discussed the newspaper business with Mr. Bainum in a Nov. 10 Zoom call.

“He seems committed for the long term, but also eager for community support,” Mr. Friedlich said in an email.

Ted Venetoulis, a publisher and former Baltimore County politician, said Mr. Bainum had raised the notion of buying The Sun in a phone conversation several months ago.

Mr. Venetoulis was active in a local campaign, called Save Our Sun, to wrest the paper from Tribune Publishing. Mr. Bainum was not part of that campaign. It included not only The Sun’s journalists but two nonprofits, including the Abell Foundation, whose endowment comes from the family that sold The Sun to Times Mirror in 1986 (Tribune purchased Times Mirror in 2000). Tribune Publishing executives had conversations with the organizers of Save Our Sun.

“He’s very frank,” Mr. Venetoulis said of Mr. Bainum. “He understands the difficulty of what has to be done. But he’s doing it for the right motives, as evidenced that he prepared to do it as a nonprofit — that’s a big step for business guys to take.”

Journalists at other Tribune papers, which include The Chicago Tribune and The Daily News, have resisted the possible sale to Alden ever since the New York hedge fund revealed in November 2019 that it had bought nearly one-third of Tribune shares. Two Chicago Tribune investigative reporters wrote letters to civic luminaries urging them to buy the paper. Other journalists across the country started campaigns similar to the Save Our Sun effort.

They wanted to be saved from Alden, whose game plan at newspapers it owns through a subsidiary, MediaNews Group, involves cutting costs, including by laying off journalists, to maintain profit margins. Alden says it is interested in blazing a sustainable path for local journalism. Critics say the hedge fund treats newspapers as if they were widgets.

“Journalism’s role in democracy is incredibly important to Stewart,” said Michael Rosenbaum, a Baltimore entrepreneur who has spoken about The Sun to Mr. Bainum, an investor in his human-resources analytics company.

Alden’s deal to take full ownership of Tribune Publishing requires approval by the company’s shareholders, and the deal to sell The Sun and the other Maryland papers is “nonbinding,” Tribune Publishing said. As part of the acquisition, Mr. Bainum’s nonprofit would also take on The Capital Gazette in Annapolis and The Carroll County Times.

“He seems to have the best interests of Baltimore and Maryland at heart,” said Liz Bowie, a Sun veteran of three decades and co-chair of its unit of the NewsGuild union. “I believe a new owner, a local owner, will invest our profits back into the paper, which will allow us to do better work.”

Mr. Bainum “seems to have the best interests of Baltimore and Maryland at heart,” a leader of The Sun’s newsroom union said.Credit…Andrew Gombert/European Pressphoto Agency

The issue Mr. Bainum is most passionate about, said Mr. Maloney, his longtime friend, is early-childhood education. The Bainum Family Foundation website explains its philosophy in practical terms: “Poverty in childhood, and especially deep poverty in early childhood, is associated with a broad range of problems.”

“He knows his way around a spreadsheet,” Mr. Maloney said. “He is not about impractical or unsuccessful philanthropy. He’s compassionate, but very pragmatic. He wants his investments to work.”