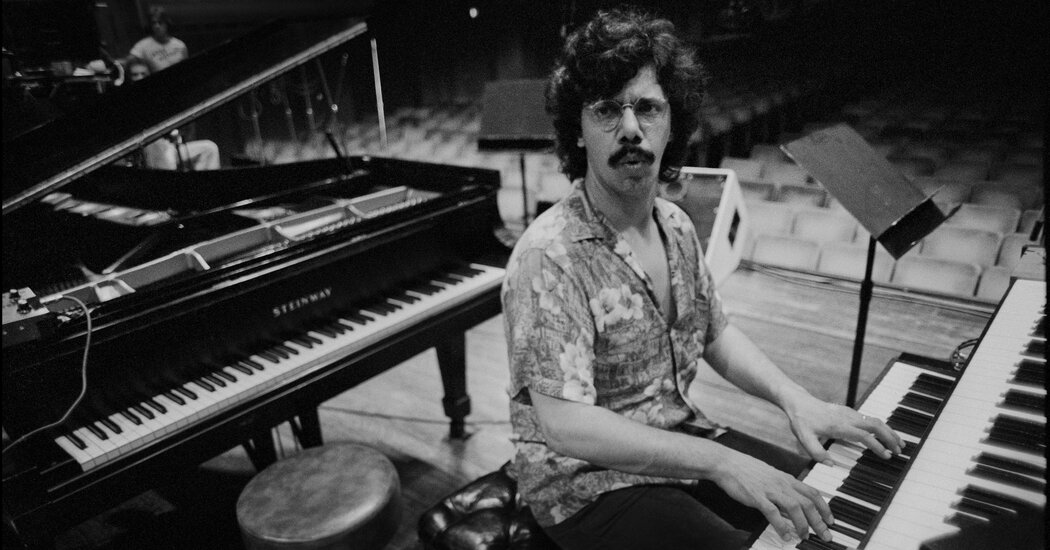 Chick Corea, the pioneering keyboardist and bandleader who died on Tuesday at 79, will be forever regarded as a crucial architect of jazz-rock fusion.

It’s a fitting one-line tribute. Whether on his own, leading the collective Return to Forever or accompanying giants like Miles Davis (on landmark albums including “In a Silent Way” and “Bitches Brew”), Corea helped enrich the lexicon of jazz — merging its harmonic language with the heaviness (and amplification) of rock and funk. But no description, even one this broad, can encompass a vision so limitless.

“After all, formal styles are only an afterthought — an outgrowth of the creative impulse,” Corea told The New York Times in 1983. “Nobody sits down and decides to specifically write in a predetermined style. A style is not something you learn so much as something that you synthesize. Musicians don’t deva if a given composition is jazz, pop or classical music. All they deva about is whether it is good music — whether it is challenging and exciting.”

For more than five decades, Corea modified his sound to follow that simple maxim — chasing whims from bebop to free jazz to fusion to contemporary classical. He recorded close to 90 albums as a bandleader or co-leader. And he always prioritized melody and musicality over empty-calorie showmanship (though few could rival his raw skill on the Fender Rhodes).

Here are 12 of his seçkine studio and live performances.

Corea and Joe Zawinul form a wall of Rhodes on this slinky, funky cut from Miles Davis’s “Bitches Brew,” punctuated by John McLaughlin’s ice-pick guitars and Davis’s sighing trumpet. The rhythm section is so dense, it’s hard to savor it all: two electric basses (Dave Holland and Harvey Brooks), two drum sets (Don Alias and Jack DeJohnette) and the congas of Juma Santos. Good thing it lasts 14 minutes. The keyboardists shift from question marks to exclamation points — one moment prodding against the groove, the next soloing in colorful bursts of noise. “Trust yourself,” Corea said in 2020, was Davis’s philosophy. “When he says, ‘Play what you don’t hear,’ he means, trust your imagination. Trust yourself to say, ‘I don’t know what I’m going to do next, but I’m just going to do it because it’s fun. Because I love it.’”

Corea splatters electric piano all across this nine-minute monster from the guitarist Larry Coryell’s “Spaces,” a pillar of early fusion. The arrangement seems to teeter between structure and improvisation, straight groove and cosmic freedom. The lineup is the definition of a supergroup: Corea and Coryell, plus John McLaughlin on guitar, Miroslav Vitouš (later of Weather Report) on double bass and Billy Cobham on drums.

The rare fusion tune with a shelf life as a jazz standard, “Spain” remains Corea’s signature composition — covered by artists as different as Stevie Wonder and Béla Fleck. The original, from Return to Forever’s “Light as a Feather,” is untouchable: Over nearly 10 minutes, the keyboardist’s hands joyfully pirouette across the Rhodes, his mellifluous melodies matched by Flora Purim’s tranquil coo and Joe Farrell’s fluttering flute. The chorus, with its clipped keyboard phrases and enthusiastic handclaps, ranks alongside Weather Report’s main “Birdland” theme as one of the catchiest moment in fusion history.

In its infancy, Return to Forever already rivaled the intensity of most ’70s rock bands. But it sounded positively massive on its third album, adding two new recruits (the powerhouse drummer Lenny White and the guitarist Bill Connors) and letting Stanley Clarke switch to electric bass. The group showed its full dynamic range on this two-parter from Return to Forever’s “Hymn of the Seventh Galaxy,” opening with Corea’s dreamy Rhodes theme before erupting into tightly clenched funk. Connors’s bruising guitar and Clarke’s distorted bass drift into psych-rock territory — but even when the keyboardist lays back a bit, his steady chords remain the heartbeat of the ensemble.

Corea’s acoustic piano slips into sumptuous New Age territory on the first half of these tracks from Stanley Clarke’s “Journey to Love,” trading fanfare with Clarke’s bowed bass and John McLaughlin’s acoustic guitar. The group nails down an intense Latin groove on the second half, with McLaughlin and Corea sparking fireworks. In the liner notes, Clarke dedicated the two-part piece to John Coltrane — and it lives up to the billing.

The definitive Return to Forever lineup — Corea, Clarke, White and the guitarist Al Di Meola — splintered after the 1976 album “Romantic Warrior.” But as this funky odyssey proves, they went out at a near peak. White is credited as composer here, and his fidgety drum groove certainly keeps the engine running. But “Sorceress” also finds Corea at perhaps his most versatile, keyboard-wise — weaving in atmospheric pads, squiggly synth leads and Latin themes on acoustic piano.

Corea was always influenced by Latin music, explaining “that flavor, I find, is mostly in everything I do,” to Billboard in 2019. “It’s a part of me. I don’t know how to differentiate it.” But he never plunged in more deeply than on his 10th solo LP, “My Spanish Heart.” The record peaks with this whiplash four-part suite, which sprawls from elegant string and brass sections to acoustic piano interludes to the tastiest jazz-rock rave-ups this side of Steely Dan’s “Aja.”

Composed by Corea for his Forever bandmate Di Meola’s debut solo album, “Land of the Midnight Sun,” this mini-epic makes good use of its virtuoso flash — both players sound like they could drift away from their instruments into the sky. But there are plenty of graceful melodies packed into these five and a half minutes. Midway through, Corea slips into gentle chordal comping while Di Meola ascends and descends the scales. Corea even gets to showcase his marimba skills, adding extra drama to a climactic flourish.

Corea and Herbie Hancock, two of fusion’s seçkine keyboardists, embarked on an acoustic duo tour in 1978, and the pair, both veterans of the Miles Davis bands, interlock to a startling degree on the two live LPs that emerged from those dates. One highlight is a 19-minute version of “Homecoming” from “CoreaHancock,” expertly merging their instruments into one organism. They move from beauty to ugliness on a dime — midway through, the piece morphs into a section of guttural grunting, percussive pounding and prepared piano madness.

Like most fusion giants who survived into the mid-80s, Corea embraced the colors and contours of the time, forming his Elektric Band with the drummer Dave Weckl, the bassist John Patitucci and the alternating guitarists Scott Henderson and Carlos Rios. The rhythm section runs free on this neon-coated number from “The Chick Corea Elektric Band,” defined by its twisting, Zappa-like rhythms and Corea’s comically bright synthesizers.

Corea stretched out “Spain” like taffy over the decades, retaining his interest by reworking it for various settings and band configurations. (“By 1976 or so, I started to tire of the song,” he told The Atlantic in 2011. “I started playing really perverted versions of it — I’d refer to it just for a second, then I’d go off on an improvisation.”) One of his most stunning later-day renditions is this live acoustic duet from “Play” with the vocalist Bobby McFerrin, who breathes new life into the piece with his divine falsetto, rumbling bass lines and body percussion. For all the sublime technique, the biggest revelation is hearing these two giants lock into perfect symmetry on the main theme.

Corea re-teamed with the vibraphonist Gary Burton for the Grammy-winning, double-disc live LP “The New Crystal Silence,” built largely on reworked pieces from Corea’s back catalog. The duo had collaborated on and off for decades, and the music here feels appropriately natural and lived-in — even full-blown Zen, like on the expanded take on “Crystal Silence.” Captured in crisp, studio-level fidelity, Corea and Burton trade phrases and counterpoint patterns, with the Sydney Symphony Orchestra rounding out that breezy conversation.