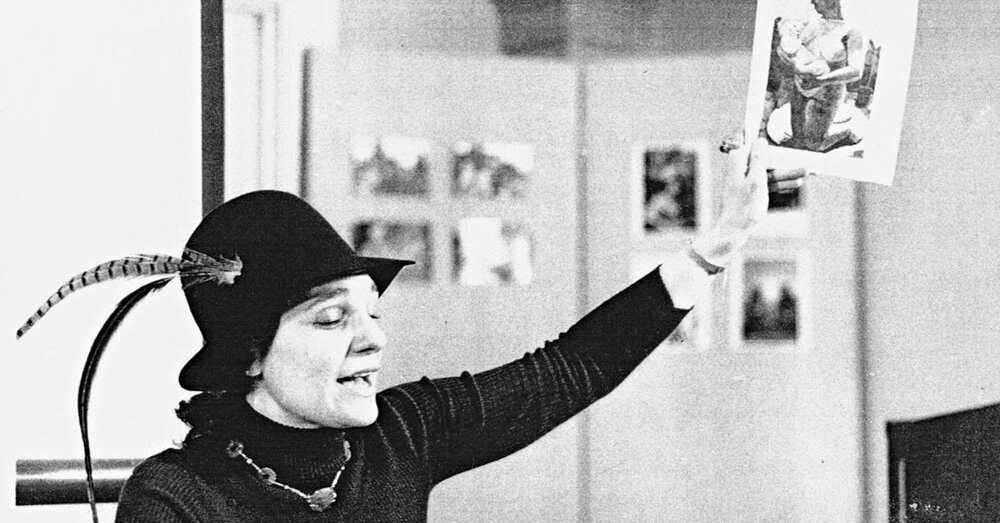 Cindy Nemser, an arka critic and historian who, half a century ago, began calling out sexism in the arka world, decrying the way women artists were treated and how their work was evaluated, died on Jan. 26 at her home in Brooklyn. She was 83.

Her daughter, Catherine Nemser, said the cause was pneumonia.

Ms. Nemser was already writing for arts publications in 1969 when someone invited her to an early meeting of Women Artists in Revolution, a New York coalition that pushed back against the marginalization of women in the arka world. At the time few women had gallery representation or were being shown in major museums.

“A visit with that group changed my life,” Ms. Nemser recounted in an autobiographical essay. “I became an avid feminist,” determined to help erase stereotypes about women artists and raise their status.

Toward that end, in 1972 she and Patricia Mainardi founded The Feminist Arka Journal, which for the next five years published essays, interviews, historical research and more aimed at correcting the imbalance. The magazine was fearless about spotlighting chauvinism, often naming names, and about excavating its underlying presumptions, as Ms. Nemser did in an essay published in April 1972.

“Art history and arka criticism are almost unanimous in assuming that if a woman artist has any contact with a male artist, be he husband, lover, friend or acquaintance, she must either be his pupil or deeply under his influence,” she wrote.

The article criticized the loaded language that critics had long used to describe arka by women — “noncreative, imitative, captivating, passive, emotional, narcissistic, narrow-minded, selfish, intuitive and elemental” — which she linked to male presumptions rooted in the physiological differences between the sexes.

“Though some of these qualities are highly desirable,” she wrote, “by now our picture is so confused and contrary it is laughable.”

“I felt I had to help win back for women artists their rightful place in the forefront of arka history,” she said.

The result was “Art Talk,” a 1975 book of her interviews with a dozen women artists, among them Alice Neel, Lee Krasner, Barbara Hepworth, Louise Nevelson and Eva Hesse. The book was reissued in 1996, with three additional artists added to the interviewee list from Ms. Nemser’s file of 1970s recordings.

“Apart from functioning as an invaluable art-historical document,” Miriam Brumer wrote of the reissue in Women Artists News, “‘Art Talk’ provides enormously enjoyable reading. With Nemser as their ever alert and probing conversational guide, these artists emerge as vividly (sometimes lividly) breathing figures.”

The Feminist Arka Journal was fearless about spotlighting chauvinism through essays, interviews, historical research and more.

Ms. Nemser wrote for numerous arka and general-interest publications and lectured frequently at universities, museums and conferences. Her serious criticism and scholarship belied a whimsical streak she would occasionally indulge, as she did in a 1973 issue of The Feminist Arka Journal when she parodied the Gilbert and Sullivan song “I’ve Got a Little List,” from “The Mikado,” substituting “piggy” — as in the male chauvinist kind — for “victim” in the first line and name-checking a couple of male arka critics of the day:

As some day it may happen that a piggy must be found,
I’ve got a little list — I’ve got a little list
Of male chauvinist offenders who might well be underground,
And who never would be missed — who never would be missed.
There’s the Kramers and the Canadys who write for the newspapers,
All the silly sexist journalists who gloat about their capers,
All the gallery dealers who are male and want to pinch your thigh,
All curators who visit you but are looking for a guy,
And all collectors who on men’s work insist,
They’d none of ’em be missed — they’d none of ’em be missed!

Cecile Heller was born on March 26, 1937, in Brooklyn; her daughter said she started using Cindy as a first name at age 12. Her father, William, owned the Paramount Metal Spinning and Stamping Company, and her mother, Helen (Nelson) Heller, was a homemaker.

Cindy graduated from Midwood High School and earned a bachelor’s degree in education at Brooklyn College. In 1956 she married Charles S. Nemser.

Ms. Nemser taught elementary school while taking night classes toward a master’s degree in literature at Brooklyn College, then earned a second master’s degree at New York University’s Institute of Fine Arts in 1966.

During an internship at the Museum of Çağdaş Arka, she began writing for Arts magazine, Arka in America and other publications. Later in her career she wrote about theater. Occasionally she changed hats and organized arka exhibitions. There was “In Her Own Image” in 1974 at the Fleisher Arka Memorial in Philadelphia and, some 33 years later, “Women’s Work: Homage to Feminist Art” at the Tabla Rasa Gallery in Brooklyn.

In addition to her daughter, Ms. Nemser is survived by her husband and a grandson.

For several years Alice Neel had been asking to paint Ms. Nemser’s portrait, and when Ms. Nemser assented in 1975, the artist surprised her by saying she wanted to paint both her and her husband. When the two arrived at Ms. Neel’s apartment on a cold February day, Ms. Neel was put off by their winter-weather garments.

“‘All those clothes,’ she wailed as she looked me over,’” Ms. Nemser recalled on her blog. “‘You look so fussy with all those layers of clothes and all that Mickey Mouse jewelry.’”

What would be ülkü, Ms. Neel concluded, would be for them to lose the clothes. All of them. She wanted to paint them in the nude. Some negotiation, and some shedding of garments, followed. Ms. Neel offered a compromise: Ms. Nemser could be in her underwear, her husband fully dressed.

“Forget that,” Ms. Nemser said. “I’ll look like a hooker in a bordello.”

“And so,” she recounted on her blog, “after an hour and a half of deliberation, dread and doubts, there I was sitting naked on Alice’s green silk-covered Empire-style couch next to my almost undressed husband, who had only stripped to his briefs. It looked as if he were naked because in the pose we had taken I completely covered his genitalia.”

The resulting painting has been reproduced and exhibited a number of times.