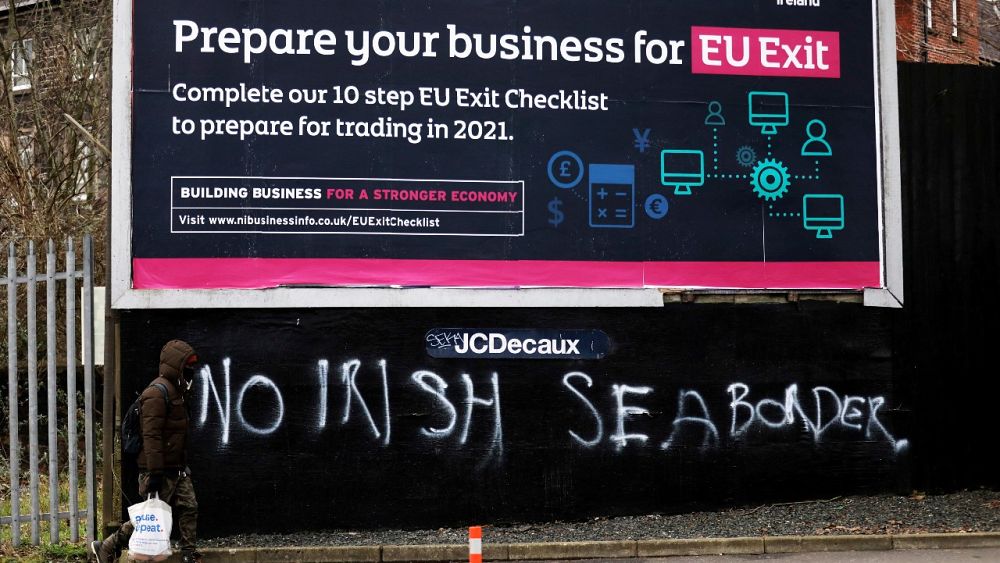 The European Union has condemned “all threats of violence” against border staff working in Northern Ireland after Brexit.

The move came in the wake of anger over new border posts to check goods under the terms of the Brexit deal which keeps Northern Ireland aligned to EU Single Market rules.

Local authorities halted sanitary and veterinary checks on Monday evening at the ports of Belfast and Larne, because of concerns over staff safety. Police said they were stepping up patrols “to reassure staff and the local community”.

European Commission spokesman Eric Mamer condemned the threats of violence, saying that EU staff in Northern Ireland had been told to stay away from work on Tuesday.

“We will continue to monitor the situation and adapt accordingly,” he added.

Local mayor Peter Johnston said there had been “deeply troubling graffiti and a very notable upping of community tensions”.

Since the UK left the European Union’s economic structures at the end of 2020, customs and veterinary checks have been imposed on goods moving between Britain and the bloc.

Under the UK-EU divorce terms there are also checks on British goods going to Northern Ireland, because it shares a border with Ireland, an EU member. An open border between Northern Ireland and the Republic of Ireland is a key pillar of the peace process that ended decades of violence in the region.

But the decision to keep Northern Ireland bound to some EU rules is opposed by pro-British Unionist politicians, who say it amounts to a border in the Irish Sea between Northern Ireland and the rest of the UK.

Politicians from all parties in Northern Ireland’s power-sharing government condemned the intimidation. In a joint statement, they said “the Executive is united in condemning any threats made against workers and staff going about their duties at Belfast and Larne ports”.

“There is no place in society for intimidation and threats against anyone going to their place of work,” they said.

UK government minister Michael Gove described the threats as “totally unacceptable” and called for “calm” and “moderation”, speaking before Parliament on Tuesday.