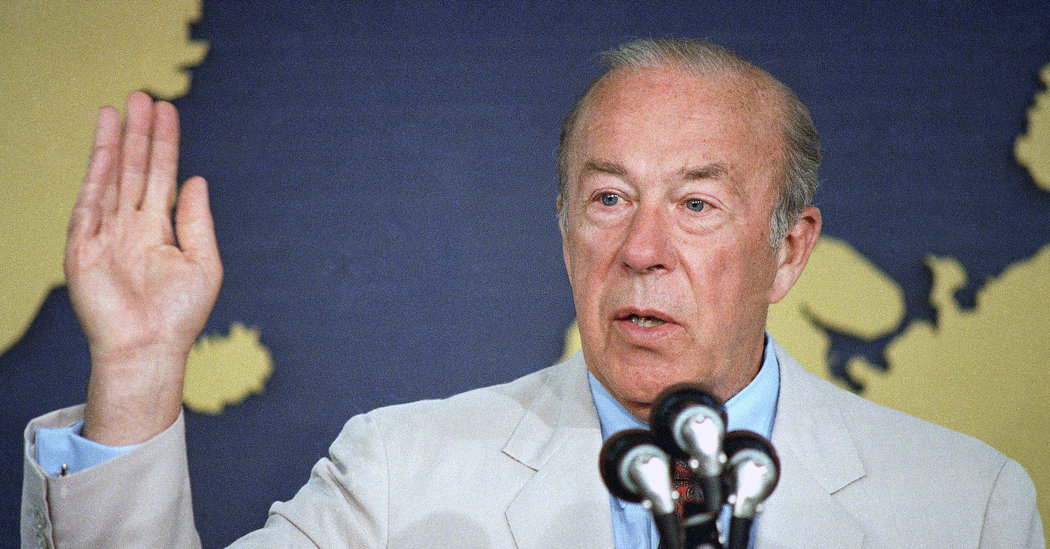 George P. Shultz, who presided with a steady hand over the beginning of the end of the Cold War as President Ronald Reagan’s often-embattled secretary of state, died on Saturday at his home in Stanford, Calif.He was 100.

His death was announced by the Hoover Institution, where he was the Thomas W. and Susan B. Ford Distinguished Fellow. He was also professor emeritus at Stanford’s Graduate School of Business.

Mr. Shultz, who had served Republican presidents since Dwight D. Eisenhower, moved to California after leaving Washington in January 1989. He continued writing and speaking on issues ranging from nuclear weapons to climate change into his late 90s, expressing concern about America’s direction.

“Right now we’re not leading the world,” he told an interviewer in March 2020. “We’re withdrawing from it.”

He carried a weighty résumé into the Reagan White House, with stints as secretary of labor, budget director and secretary of the Treasury under President Richard M. Nixon. He had emerged from the wars of Watergate with his reputation unscathed, having shown a respect for the rule of law all too rare in that era. At the helm of the Treasury, he had drawn Nixon’s wrath for resisting the president’s demands to use the Internal Revenue Service as a weapon against his political enemies.

As secretary of state for six and a half years, Mr. Shultz was widely regarded as a voice of reason in the Reagan administration as it tore itself asunder over the conduct of American foreign policy. He described those struggles as “a kind of guerrilla warfare,” a fierce and ceaseless combat among the leaders of national security.

He fought “a battle royal” in his quest to get out the facts, as he later testified to Congress during the Iran-contra affair. The director of the Central Intelligence Agency, William J. Casey, followed his own foreign policy in secret, and the State Department and the Pentagon constantly clashed over the use of American military force. Estranged from the White House, Mr. Shultz threatened to resign three times.

Mr. Shultz was summoned to Camp David and handed the wheel of American foreign policy in June 1982. Initially deemed too politically moderate by Reagan’s advisers, he had been passed over for the post of secretary of state the previous year. (The position had gone to Alexander M. Haig Jr., the mercurial and combative general who lasted barely 18 months before he abruptly left office amid fierce disputes over the direction of diplomacy and the projection of American power.)

The Middle East was exploding, the United States was underwriting covert warfare in Central America, and relations with the Soviet Union were at rock bottom when Mr. Shultz became the 60th secretary of state.

Moscow and Washington had not spoken for years; nuclear tensions escalated and hit a peak during his first months in office. The hard work of replacing fear and hatred with a measure of trust and confidence took place in more than 30 meetings with Mr. Shultz and the Soviet foreign minister, Eduard Shevardnadze, between 1985 and 1988. The Soviets saw Mr. Shultz as their key interlocutor; in private, they called him the prime minister of the United States.

Almost alone among the members of the Reagan team, Mr. Shultz had seen early on that the new Soviet leader, Mikhail S. Gorbachev, and his allies in Moscow were different from their predecessors. The rest of the national security team, and especially Reagan’s defense secretary, Caspar W. Weinberger (known as Cap), had scoffed at the idea that the Kremlin could change its tune.

“Many people in Washington said: ‘There is nothing different, these are just personalities. Nothing can be changed,’” Mr. Shultz recounted in an oral history of the Reagan administration. “That was the C.I.A. view; that was Cap’s view; that was the view of all the hard-liners.”

“They were terribly wrong,” he added.

The world seemed on the verge of a lasting peace when he left office; the Berlin Wall still stood, but not for long. “It is fair to say that the Cold War ended during the Reagan years,” Mr. Shultz wrote in his 1993 memoir, “Turmoil and Triumph: My Years as Secretary of State.” The easing of four decades of grinding tension changed the küresel landscape. There would be fewer nuclear weapons pointed at great cities, fewer proxy wars in Africa, Asia and Latin America.

But a lethal force was rising in Afghanistan, where American-supplied weapons in the hands of Afghan rebels killed Soviet occupying forces throughout the 1980s. Both Moscow and Washington had poured billions of dollars into the fight, and both sides continued to support rival Afghan factions after the Soviets pulled out in February 1989.

“We assert confidently our right to supply our friends in Afghanistan as we see the need to do so,” Mr. Shultz announced in April 1988. American arms had helped empower a generation of holy warriors who had bled the Red Army, but who would eventually shelter and support the Qaeda terrorists who struck the United States on Sept. 11, 2001.

This is a developing story. A fuller obituary will be published shortly.