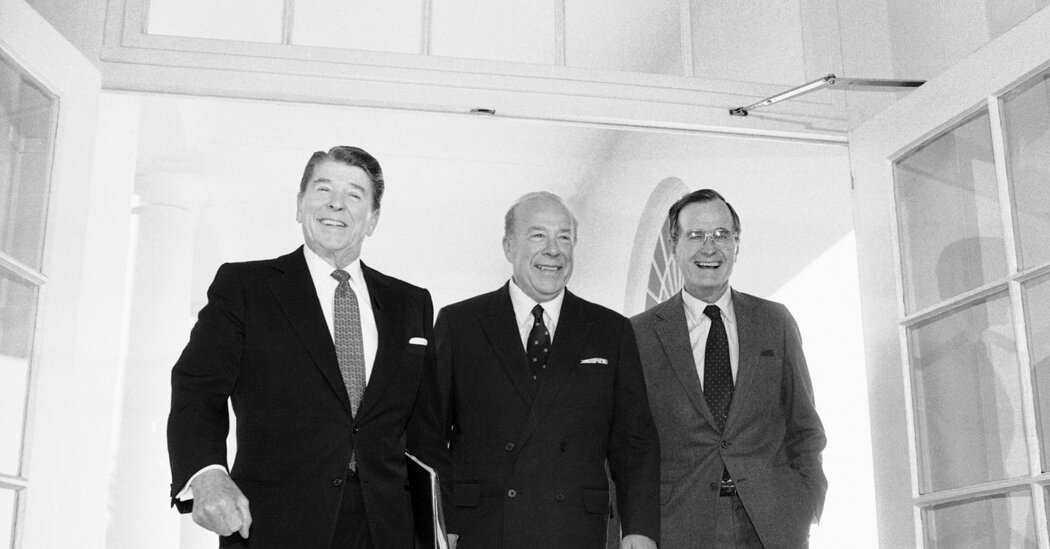 George Shultz, a long-serving secretary of state under President Ronald Reagan, died on Saturday at age 100. A man of many achievements — he also held three cabinet posts under President Richard Nixon — there’s one for which he never received full credit: winding down the Cold War.

It was the way in which he found success that made Mr. Shultz exceptional. He could be coldblooded, obdurate and inscrutable, but whenever the opportunity arose to connect with someone on a personal level, he embraced it. The human touch was at the heart of all Mr. Shultz did. His gestures of kindness and respect seem almost quaint now, a throwback to a gentler age when venom was not the elixir of public discourse.

Take the time he brought James Goodby, a senior Reagan administration arms control negotiator, to the Oval Office for a meeting with Reagan. Mr. Shultz guided Mr. Goodby to the wingback chair next to the president, the seat reserved for the highest ranking guest. Mr. Shultz sat on the sofa. Mr. Goodby never forgot the gesture.

Or consider Mr. Shultz’s first meeting with Eduard Shevardnadze in 1985. The newly appointed Soviet foreign minister was making his küresel debut at an international conference in Helsinki, Finland. “We’re going to have plenty of arguments with this guy, but let’s make friends with him,” Mr. Shultz told his wife. “We don’t have to have personal animosity. Let’s try to fix it so we don’t have that sorun.”

With some 30 national delegations gathered in Finlandia Hall, Mr. Shultz placed his papers at the American table at the bottom of the amphitheater and slowly climbed the steps to the Soviet delegation near the last row to welcome Mr. Shevardnadze. The buzz of dozens of conversations stopped as he approached Shevardnadze and extended his hand. After years of frigid American dealings with Andrei Gromyko, Mr. Shevardnadze’s predecessor, the moment was electrifying. It helped set the foundation for a remarkably constructive working relationship between Mr. Shultz and Mr. Shevardnadze.

Decades later, when I interviewed Mr. Shevardnadze in his hometown, Tbilisi, Georgia, he was sinking rapidly into Parkinson’s disease and struggled to stand up. He instructed an aide to pick up a small stack of papers across the room and bring them to me. They were a decade’s worth of Christmas cards from Mr. Shultz and his wife, Charlotte. He cherished them.

When I asked Mr. Shultz evvel how he wanted to be remembered, I expected him to talk about geopolitical strategy and the four Reagan-Gorbachev summit meetings that eased Cold War tensions. Instead, he told me about the individuals trapped or imprisoned in the Soviet Union whom he helped to free so they could emigrate to Israel or the United States.

I pressed him to talk about the big picture, his legacy as secretary of state. “Ida Nudel,” he replied, referring to one of the Russians who escaped Soviet tyranny thanks to Mr. Shultz.

George Shultz was the last of the postwar statesmen who served in combat during World War II. He was not an infallible or flawless person — but his kindness, combined with his common sense and pragmatic approach to solving problems, ought to be an example for our discordant time.

Philip Taubman, a reporter and editor for three decades at The New York Times, is a consulting professor at Stanford University’s Center for International Security and Cooperation. He is writing a biography of George Shultz.