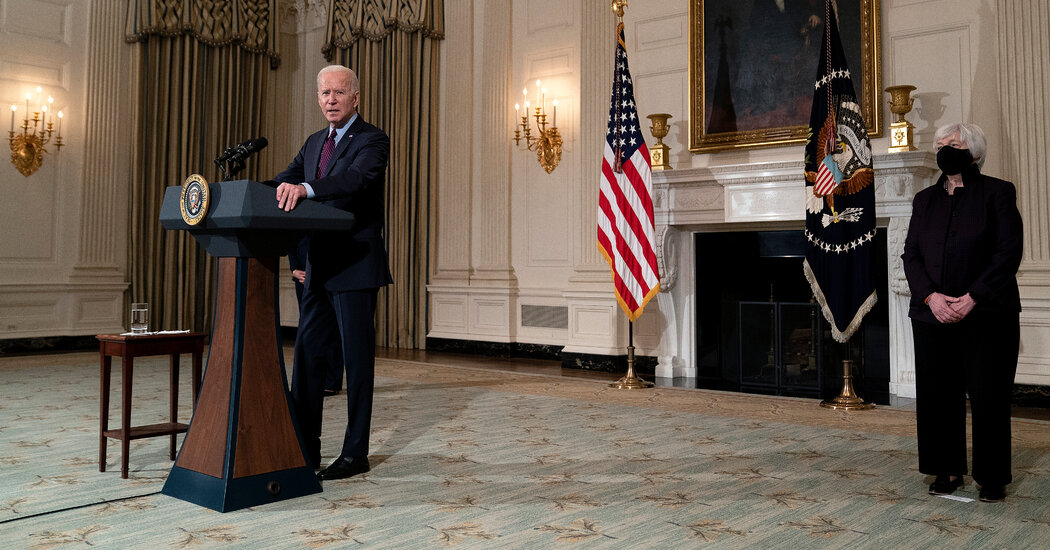 A dozen years ago, just before Barack Obama was sworn in as president amid the Great Recession, I wrote a disconsolate column titled “The Obama Gap.” At a time when many viewed the president-elect as a transformational figure, I lamented the caution of his economic policy. His proposed stimulus, I argued, would fall well short of what was needed.

Sadly, I was right. And as I also warned at the time, Obama didn’t get a second chance; the perceived failure of his economic policy, which mitigated the slump but didn’t decisively end it, closed off the possibility of further major action.

The good news — and it’s really, really good news — is that Democrats seem to have learned their lesson. Joe Biden may not look like the second coming of F.D.R.; Chuck Schumer, presiding over a razor-thin majority in the Senate, looks even less like a transformational figure; yet all indications are that together they’re about to push through an economic rescue plan that, unlike the Obama stimulus, truly rises to the occasion.

In fact, the plan is aggressive enough that some Democratic-leaning economists worry that it will be too big, risking inflation. However, I’ve argued at length that they’re wrong — or, more precisely, that, as Treasury Secretary Janet Yellen says, the risks of doing too little outweigh any risk of overheating the economy. In fact, a plan that wasn’t big enough to raise some concerns about overheating would have been too small.

But how did Democrats get so bold? The answer is that they’ve learned some important things about both economics and politics since 2009.

On the economic side, Democrats have finally stopped believing in the debt boogeyman and the confidence fairy, who will make everything better if you slash spending.

There was a time when many Democrats — including President Obama — accepted the proposition that public debt was a huge sorun. They even took seriously warnings from people like Representative Paul Ryan that debt was an “existential threat.” But predictions of an imminent fiscal catastrophe kept being proved wrong, and at this point mainstream economists have become much more relaxed about debt than they were in the past.

Some Democrats also used to worry that big spending programs would hurt the economy by undermining business and investor confidence, and conversely that caution would be rewarded with higher private investment. But this doctrine has also been belied by experience; austerity doesn’t instill confidence, it just imposes pain.

But if Democrats have learned a lot about economic reality since 2009, they’ve learned more about political reality.

Obama came into office sincerely believing that he could reach across the aisle, that Republicans would help him deal with the economic crisis. Despite the reality of scorched-earth opposition, he continued to seek a “grand bargain” on debt. He regarded the rise of the Tea Party as a “fever” that would break in his second term. He was, in short, deeply naïve.

Many progressives worried that President Biden, who had served in the Senate in a less polarized era, who talks a lot about unity, would repeat Obama’s mistakes. But so far he and his congressional allies seem ready to go big, even if that means doing without Republican votes.

One thing that may be encouraging Democrats, by the way, is the fact that Biden’s policies actually are unifying, if you look at public opinion rather than the actions of politicians. Biden’s Covid-19 relief plan commands overwhelming public approval — far higher than approval for Obama’s 2009 stimulus. If, as seems likely, not a single Republican in Congress votes for the plan, that’s evidence of G.O.P. extremism, not failure on Biden’s part to reach out.

Beyond that, Biden and company appear to have learned that caution coming out of the gate doesn’t store up political capital to do more things later. Instead, an administration that fails to deliver tangible benefits to voters in its first few months has squandered its advantage and won’t get a do-over. Going big on Covid relief now offers the best hope of taking on infrastructure, climate change and more later.

Oh, and Democrats finally seem to have learned that voters aren’t interested in process. Very few Americans know that the Trump tax cut was rammed through on a party-line vote using reconciliation, the same maneuver Democrats are now pursuing, and almost nobody cares.

Finally, I suspect that Democrats realize that getting policy right is even more important in 2021 than it was in 2009 — and not just because of the economics. When much of the opposition party won’t acknowledge election results, condones insurrection and welcomes conspiracy theorists into its ranks, you really don’t want to pursue policies that might fall short and thereby empower that party in the years ahead.

Put it this way: Debt isn’t and never was an existential threat to our nation’s future. The real existential threat is an illiberal G.O.P. that looks more like Europe’s far-right extremists than a olağan political party. Weakening policy in ways that might help that party’s prospects is a terrible idea — and I think Democrats realize that.

So this time Democrats are ready to seize the day. Let’s hope it will be enough.