‘Old Indiana,’ from the album ‘The Way I Heard It’

The tune was popular in the 1930s and ’40s in the southern Missouri Ozarks.

The old-time dance music — merry and sweet, or slower and wistful — evoked the lively jigs and reels of the Scots-Irish pioneers who settled in these rugged hills generations ago. A precursor to bluegrass, their sound was unique to this particular corner of Missouri.

The McClurg jam, as the Monday night music and potluck fest was known, endured for decades, the last gathering of its kind in the rural Ozarks. But the coronavirus pandemic has silenced the instruments, at least temporarily. And the suspension has led to worry: What will become of this singular musical tradition? 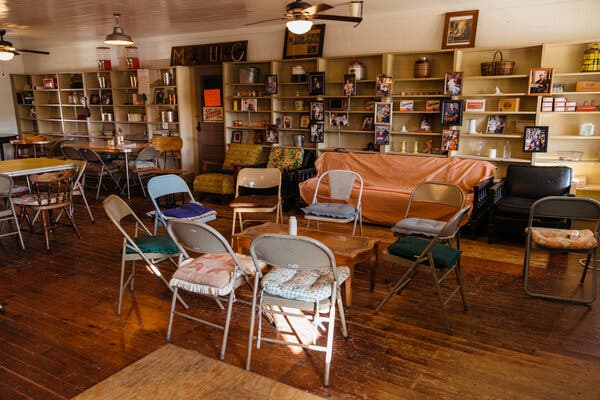 The McClurg jam, as the Monday night music and potluck fest was known, endured for decades, the last gathering of its kind in the rural Ozarks.Credit…Terra Fondriest for The New York Times

Alvie Dooms holds a rare fiddle at his home in rural Ava, Mo. A longtime member of the McClurg jam, Mr. Dooms owns hundreds of instruments that he fixes and collects.Credit…Terra Fondriest for The New York Times

“Because it’s ear music, it’s a little bit fragile,” said Howard Marshall, 76, a retired professor at the University of Missouri and a fiddler himself. “I’m not playing it exactly like the next chap will play it.”

In other words, the McClurg old-time fiddlers and banjo players have mostly learned the tunes by listening to one another rather than reading from sheet music, passing the tradition from one generation to the next. Many of the musicians who know the songs best are growing old and, for now at least, have been sidelined.

“I’m one of the younger ones, and I’m 74,” said Steve Assenmacher, a bass player who lives just up the hill from the McClurg Store and acts as its caretaker.

In normal years, the store, still crammed with faded boxes of bras and women’s pumps left from a generation ago when the business shut down, is revived once a week for the jam. Musicians stream into McClurg, about 240 miles southwest of St. Louis, on Monday nights, performing for friends and spouses. They play sitting in a circle, stealing glances at Mr. Dooms’s callused fingers to gauge where his rhythm guitar might go next.

Behind them, wives of the mostly male musicians and a handful of regulars snack on pot roast, quiche and pies. Occasionally, someone rises to their feet to dance.

Sometimes called “mountain music,” the old-time genre has survived hundreds of years because of gatherings like the one in McClurg. Here, sheet music is referred to as “chicken scratches,” and formally trained musicians are at grave risk of being reviewed as “stiff.” Children with an aptitude for music have, for generations, picked up a family instrument and played along, rather than taking formal lessons.

“I’m one of the younger ones, and I’m 74,” said Steve Assenmacher, a bass player who lives just up the hill from the McClurg Store and acts as its caretaker.Credit…Terra Fondriest for The New York Times
McClurg, a crossroads more than a town, is home to a particular strain of old-time music that is not played in precisely the same way anywhere else.Credit…Terra Fondriest for The New York Times

Mr. Dooms can still recall shivering in the back of a wagon as a boy, as his parents drove through the Ozark hills after dance parties, a fiddler’s music reverberating through his head to the rhythm of a horse’s feet striking dirt.

“That was back when they had dances in people’s houses,” Mr. Dooms said. “You know, they’d move the furniture all out in a couple of rooms. The musician would sit in the doorway between them and they could dance in both rooms.”

‘Sugar in the Gourd’ by Bob Holt

McClurg, a crossroads more than a town, is home to a particular strain of old-time music that is not played in precisely the same way anywhere else. Just a hundred miles away, in central Missouri, old-time music circles produce more waltzes and “schottisches,” dances that resemble a slow polka, because of the German immigrants who settled closer to the Missouri River.

So when the pandemic led Missouri officials to limit in-person gatherings last spring, the musicians who gather in McClurg pledged to find a way to keep the sessions going. Last May, Mr. Assenmacher swept out a barn adjacent to the store and strung some lights. They canceled the potluck and focused just on the music, seating visitors at the barn’s entrance, in the open air.

The music sessions continued for most of the year. But finally, in mid-November, as alarmed hospital officials warned that their facilities were nearing capacity and the frigid temperatures became unpleasant, the jam session was called off indefinitely.

Musicians streamed into McClurg on Monday nights, playing for friends and spouses. The McClurg Store is seen here on the right.Credit…Terra Fondriest for The New York Times
Sometimes called “mountain music,” the old-time genre has survived hundreds of years because of gatherings like the one in McClurg.

David Scrivner, a younger fiddler at 38, said the decision came with some anguish. The McClurg jam featured variations of songs that could not be heard elsewhere, he said. But the safety of the elder musicians, whom he describes as “treasures,” was paramount, he said.

Mr. Scrivner has won awards for his fiddling. But he does not read music, and neither did his mentor, the legendary Ozarks fiddler Bob Holt, who died in 2004, at 73.

David Scrivner, heard playing here, is among the younger musicians at the McClurg jam.

The McClurg jam was the classroom where Mr. Scrivner soaked in the stories and techniques of the older musicians, especially Mr. Holt.

He recalled one particularly practical lesson: when and how to tap his foot to keep the beat. “I didn’t have it,” Mr. Scrivner said. “And he stopped in the middle of a tune and let me know that I needed to either tap my foot right or not at all.”

That classroom has ceased to exist, at least for the time being.

Even before the pandemic, younger residents had failed to show much interest in old-time music circles, leading Mr. Scrivner to worry that the music might not survive another couple of generations. Now, he fears that timeline may be shortened.

Mr. McCann, the rhythm guitar player, quit making the hourlong trek from his home in Springfield, Mo., to the McClurg jam in October because he got “spooked” by the virus.

“My wife said, ‘Don’t bring it home to me,’” Mr. McCann said. “We’ve been married 68 years, so I do what she tells me.” He noted that his wife had stopped attending years ago, the night she learned a family of snakes had taken up residence outside the old store’s outhouse.

Fiddles hanging from the ceiling of Mr. Dooms’s home.Credit…Terra Fondriest for The New York Times
Mr. Dooms can recall shivering in the back of a wagon as a boy, as his parents drove through the Ozark hills after dance parties, a fiddler’s music reverberating through his head to the rhythm of a horse’s feet striking dirt.Credit…Terra Fondriest for The New York Times

Mr. McCann has donated hundreds of hours of recordings to a local university, where the audio has been uploaded to YouTube.

Dr. Marshall, who taught art history at the University of Missouri, said the internet had guaranteed that many of the songs would endure. It is the stories behind the songs and institutional knowledge that will disappear if jams like McClurg cease to exist.

He has seen recent videos of other picking circles or music parties that have continued, despite the coronavirus.

“I think that’s something that their families might regret one day, but you can’t explain that to people,” Dr. Marshall said. “A lot of the folks who play old folk music are, shall we say, independent-minded.”

He understands the angst behind the McClurg decision to stop playing. Even if the musicians are not stricken with Covid-19, he said, an extended pause is precious time — because they can “get rickety” with age.

And that is exactly what is happening with the McClurg elders as they wait out the pandemic.

Mr. McCann suffered a second stroke in November. He is trying to keep his calluses by playing guitar alone in his basement.

And Mr. Dooms, who has survived three major heart attacks in his life, said that his “lungs ain’t no good.”

Once the winter has passed, Mr. Assenmacher hopes to welcome musicians back to the open-air barn. But, he said, until the musicians have been vaccinated and public health officials declare widespread immunity, the old general store in McClurg will remain closed.