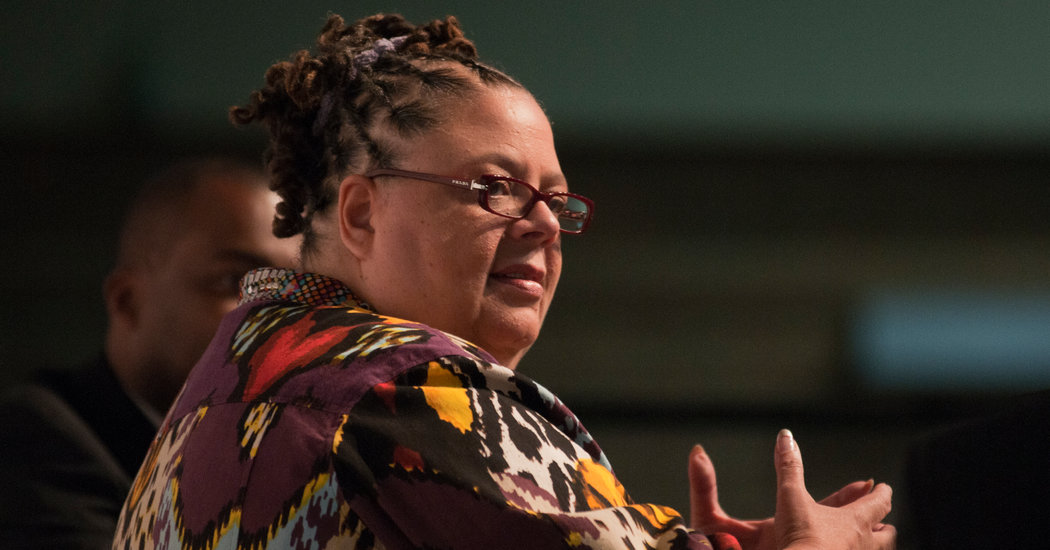 CHICAGO — Karen Lewis, a formidable teachers union leader in Chicago who battled Rahm Emanuel when he was mayor, and who in 2012 led the city’s public-school teachers in their first strike in a quarter-century, died on Monday. She was 67.

Her death was announced by the Chicago Teachers Union, which did not say where she died. Ms. Lewis had been under treatment for glioblastoma, an aggressive type of brain cancer that forced her to retire as head of the union in June 2018 after undergoing brain surgery.

The cancer was first diagnosed in 2014 and had forced her to abandon the idea, endorsed by many, of running for mayor of Chicago the following year. She had hoped to unseat Mr. Emanuel, a Democrat and former chief of staff to President Barack Obama. Mr. Emanuel was re-elected.

Ms. Lewis’s death came as the union was close to a final agreement with the Chicago Public Schools that would avert another strike, this time over the question of how teachers, students and school staff members could safely return to classrooms during the coronavirus pandemic.

The union called Ms. Lewis “a brawler with sharp wit and an Ivy League education.”

“She spoke three languages, loved her opera and her show tunes, and dazzled you with her smile,” the union said, “yet could stare down the most powerful enemies of public education and defend our institution with a force rarely seen in organized labor.”

After Ms. Lewis stepped down as union leader, Mr. Emanuel praised his old adversary’s tenacity and advocacy for the city’s children, saying that he and she had “grown to admire each other as friends.”

In the years before that, Ms. Lewis, a former chemistry teacher, called the mayor a bully and a liar in the pages of local newspapers as she negotiated for a new contract for the 26,000 teachers she represented in the nation’s third-largest school system.

The success of the 2012 strike, which lasted seven days, followed by a smaller walkout in 2016, helped organized labor remain a powerful force in Chicago, one of the country’s last major union strongholds.

“Our city has lost a great voice,” Stephanie Gadlin, a former spokeswoman for Ms. Lewis, said in an email on Monday. 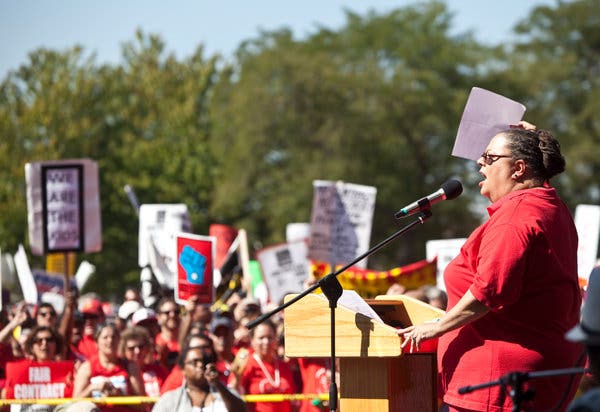 Ms. Lewis in 2012 leading a schoolteachers’ rally at Union Park in Chicago. She guided them in a seven-day strike that year. Credit…Nathan Weber for The New York Times

Karen Jennings was born on July 20, 1953, on the South Side of Chicago into a family of teachers. She attended the city’s public schools.

She considered entering medicine but chose teaching instead after she “fell madly, passionately in love with it,” she told Dartmouth’s alumni magazine in 2011.

She had transferred to Dartmouth after first studying at Mount Holyoke College in Massachusetts. She graduated with a bachelor’s degree in sociology and music in 1974, received a master’s degree in education at Northeastern Illinois University in Chicago in 1993 and an M.F.A. from Columbia College Chicago in 2002.

She later spoke of having felt isolated at Dartmouth, which admitted its first women in 1972, as a Black woman.

“Dartmouth was a really bad experience for me, but it made me stronger,” she told the magazine, adding: “It was clear that women weren’t wanted. That did teach me that top-down decisions usually take a while for people to buy into.”

She married Arnold Glenn after graduation, and they settled in Oklahoma. The marriage ended in divorce. Returning to Chicago, she soon joined the faculty of one of the city’s top high schools, Lane Tech, on the North Side. In 2001, she married John Lewis, a fellow teacher there.

Her husband survives her. They had lived in the Bronzeville neighborhood of Chicago. Complete information on her survivors was not immediately available.

Ms. Lewis traced her career in organized labor to when she was serving on a local school council and witnessed a power grab by a principal who was using his position to enrich his friends.

“That got me involved with the union, which I saw as the only protection against unfairness,” she told the Dartmouth magazine.

Ms. Lewis taught from 1988 to 2010, when she was elected union president, a demanding job that required her to navigate the complex politics of Chicago and its sprawling, frequently troubled school system while representing tens of thousands of teachers and staff members.

It wasn’t long before she was faced with a bitter contract dispute between the union and the city. Teachers said they had been promised a four percent hisse raise that was never delivered; Mr. Emanuel, who had pledged to make major changes to the school system after being first elected in 2011, pushed for longer school days and tougher teacher evaluations.

The teachers took to the picket lines, leaving some 350,000 students out of class but winning raises, though as a concession to the city the union agreed to let students’ test scores factor into teachers’ evaluations.

Some debates were lost: Ms. Lewis couldn’t stop the mayor from closing nearly 50 schools deemed underperforming or underused. She argued that the closings would destabilize neighborhoods and have an unfair impact on Black and Latino families.

She also resisted, unsuccessfully, what she saw as excessive standardized testing and repeatedly argued that the achievement gap, particularly in large, segregated cities like Chicago, was caused by poverty.

Ms. Lewis was elected to a second three-year term as union president in 2013.

She was widely discussed in 2014 as a mayoral contender, but before she could declare a run she found out that she had a brain tumor. She threw her support behind another of Mr. Emanuel’s opponents, Jesus G. Garcia, then a county commissioner.

Mr. Garcia won enough votes in the mayoral primary to force a runoff with Mr. Emanuel, but lost to him by a wide margin in the general election in 2015. (Mr. Emanuel chose not to seek a third term in 2019.)

Even after she retired from teaching, Ms. Lewis often spoke of her lingering affection for the classroom.

“I’ve measured my success as a teacher by the hugs at the end of the year,” she evvel said, “by the conversations with kids who say, ‘I never thought of it that way.’”