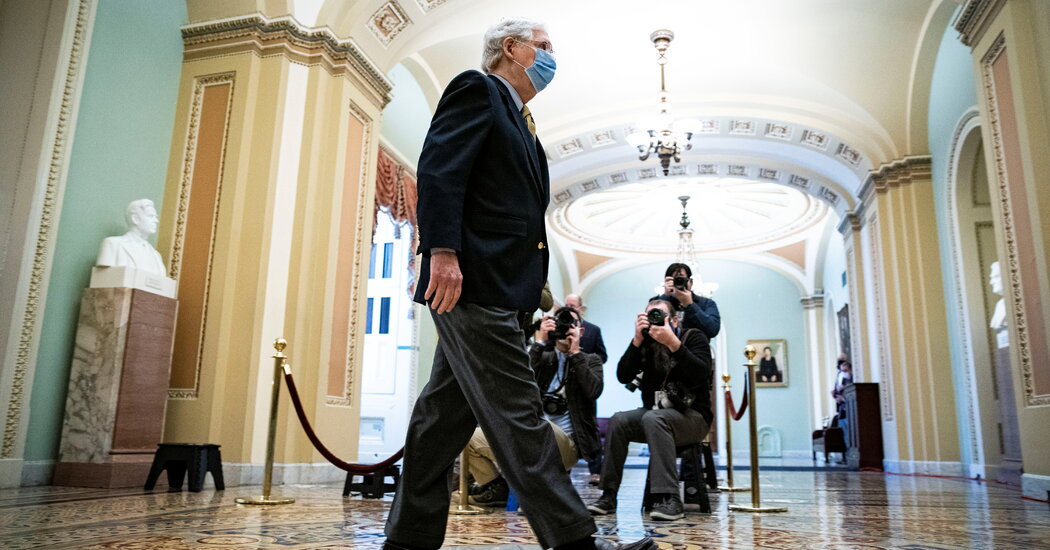 Bret Stephens: What a wild week, Gail. Should we feel pleased that seven Republican Senators voted to convict Donald Trump of incitement — six more than in the last impeachment — or appalled that the other 43 didn’t?

Another way of putting the question is whether the G.O.P.’s cup is 14 percent full or 86 percent empty.

Gail Collins: It was certainly an interesting show. It’ll be a long time before I forget Mitch McConnell’s speech about the “outgoing president who seemed determined to either overturn the voters’ decision or else torch our institutions on the way out.”

It was, by McConnell standards, very passionate. Of course it’d have been a heck of a lot more moving if he hadn’t just voted against any punishment.

Bret: The other day I listened to a Malcolm Gladwell podcast on the Yiddish word “chutzpah.” The word has two distinct connotations. In its American usage, it suggests audacity, as in, “It took a lot of chutzpah for her to walk into her boss’s office back in 1962 and demand a raise, but — guess what? — she got it!” In the Israeli sense, it usually means gall and shamelessness, as in, “First the uzunluk murders his parents. Then he pleads for mercy in court because he’s an orphan.”

Anyway, McConnell’s speech was chutzpah in the Israeli sense. He wanted to have his outrage and eat it, too. He wanted to ease whatever conscience he has left by denouncing Trump in a way that had no consequences, while using a kanunî dodge to advance his political interests in the way that really matters. Just pathetic.

Gail: Maybe we can call it the McConnell Two-Step.

Bret: Or maybe the “Mitch Macarena.” Where is Ted Sorensen when you need him to ghostwrite “Profiles of Invertebrates?” It’s the story of today’s Republican Party and conservative establishment, minus Liz Cheney, Adam Kinzinger, Lisa Murkowski and the other brave ones.

Gail: But about the G.O.P’s cup — I ought to ask you. Where do you see your party going from here? Engineering a post-Trump turnaround or just sticking to the same brain-dead script that’ll probably force you to vote Democratic again in 2024?

Bret: Gail, it isn’t my party any longer, and you’re obviously delighting in the thought of my being forced to vote for Democratic presidential candidates for three election cycles in a row. It might suggest a pattern.

Right now I’m working on a longish piece making the case that America needs a Liberal Party, albeit in the European sense of the term. I mean parties that are for free markets, civil liberties and small government, without being hostile to immigration and cultural change.

Gail: If that means a three-party system, we’re going to have a lot to fight about.

Bret: We should fight more. As for the G.O.P., it’s probably a lost cause. My guess is that Trump’s luster will fade in the party because a lot of Republicans know he’s crazy and are ashamed of what happened on Jan. 6. But Trumpism as the politics of nativism, rage and conspiracy theory is going to be a dominant strain in the G.O.P., especially if Josh Hawley or Tom Cotton or one of the Trump kids is the next nominee. 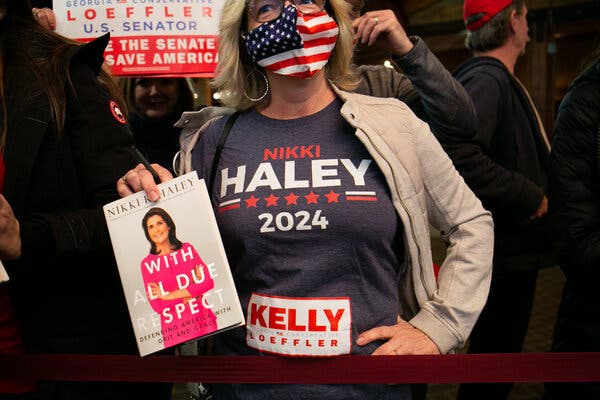 Bret: To return to Yiddish: Oy vey. Of course there’s Nikki Haley. But after reading Tim Alberta’s long profile of her in Politico, I can’t decide whether she’s crazy like a fox or too clever by half.

Gail: What do you think her slogan would be: Served the Trump administration loyally except secretly she always hated him?

Bret: From a political standpoint, she’s played her cards pretty astutely. She might be the only potential G.O.P. candidate who can unite the party. She’s smart, charismatic, has a great personal story, did the right thing as governor of South Carolina by getting rid of the Confederate flag from the State House soon after the Charleston church slaughter, and was effective as U.N. ambassador. If she wins the nomination she’d be a formidable challenger to the Democratic nominee, whoever that winds up being.

Bret: Interesting that Kamala ’24 already seems like a foregone conclusion. Shades of Hillary ’08?

Back to Haley. Her dodges and maneuvers are a bit too transparent. And her brand of mainstream Republican conservatism is just out of step for a party that is increasingly out of its mind.

Gail: Still, you’ve got me obsessing about an all-female presidential race.

Gail: But back for a minute to the Senate. Do you think they should have called witnesses so the country could have listened to a description of Trump ignoring the real physical danger to Mike Pence and other top Republicans, and defending the rioters when he was begged to call them off?

Bret: Not really, no. What more does the country need to know than the evidence the House managers presented? Calling witnesses would have dragged out the trial for weeks on end, forcing us all to watch those despicable Trump lawyers. And we both know it wouldn’t have changed the result.

Gail: Yeah, and we really need to get on to Biden’s agenda. There’s a rumor about some kind of pandemic …

Bret: Also, the trial introduced the country to some new Democratic stars. Stacey Plaskett deserves an immediate promotion to a big administration job. And Jamie Raskin should be a future contender for attorney general. That he was able to perform with so much grace under pressure, after a terrible family tragedy, made him that much more admirable.

Bret: So it’s time for the country to move on. Since I’m grooving on Jewish tropes today, let’s just say, “Trump Came, He Tried to Destroy Us, We Won, Let’s Eat.”

Let me switch subjects on you this time. Should Andrew Cuomo be impeached for being, er, highly parsimonious with the truth about the nursing home Covid deaths?

Gail: This is Andrew Cuomo. Punishment would be not letting him run for a fourth term in 2022. But New York definitely needs a new crop of executives. Try mentioning Bill de Blasio to a socially distanced friend and watch eyes glaze over from six feet away.

Bret: Or, in my case, head exploding. De Blasio is to managerial competence what Yogi Berra was to the syllogism. He’s the guy who redeems the memory of Abe Beame. He makes Trump’s handling of the coronavirus situation seem relatively competent. He’s the nation’s unintentional uniter, bringing everyone from Cuomo to Ted Cruz together into shared contempt.

Gail: I thought I was good at complaining about de Blasio, but you win the medal.

Bret: I’m keeping fingers crossed that Andrew Yang or some other reasonably competent character can bring the city back from moving further toward 1970s-style insolvency, disorder, crime and decay.

Gail: Here’s my last question, Bret. In a couple of weeks it’ll be March. Which won’t change much, pandemic-wise. But as it starts to get warmer, do you think we’ll all start to feel more optimistic? Walking through parks, picnics on the terrace? Our last Trumpian chapter over?

Bret: I’m enjoying this continual blanket of snow and wouldn’t mind if it stretched into April. Maybe it will help everyone chill out and calm down. And it’s an excellent excuse for doing as little exercise as possible and binge-watching this French spy thriller, “The Bureau,” that an old friend of mine just got me into.