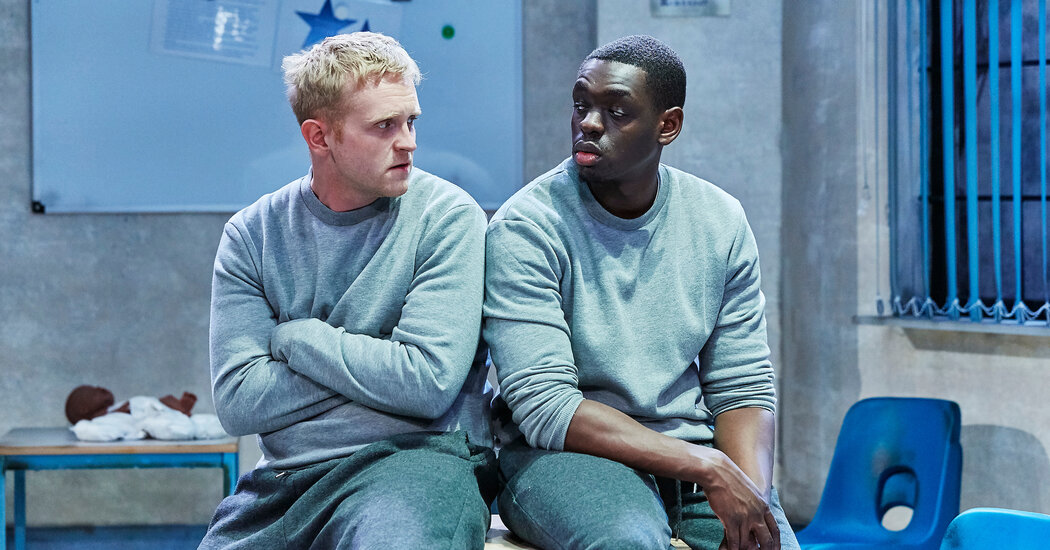 Great injustice makes great drama, so it’s no surprise that playwrights have been drawn to the epidemic of incarceration among neglected young men.

Or should I say the pandemic? “Shook,” Samuel Bailey’s knockout professional debut, diagnoses much the same disaster in Britain as some recent American plays have diagnosed here.

But if “Shook” echoes stateside dramas like “Pipeline,” “Notes From the Field” and “Whorl Inside a Loop” in its mash-up of themes, it is so specific to its own milieu that it rings with fresh truth. That milieu is an English “young offenders’ institution,” roughly the equivalent of a juvenile detention center. Three young men — Riyad, Cain and Jonjo — are the offenders in question, though calling them young men is part of the sorun. They are teenagers: Riyad and Cain, 16; Jonjo, 17. 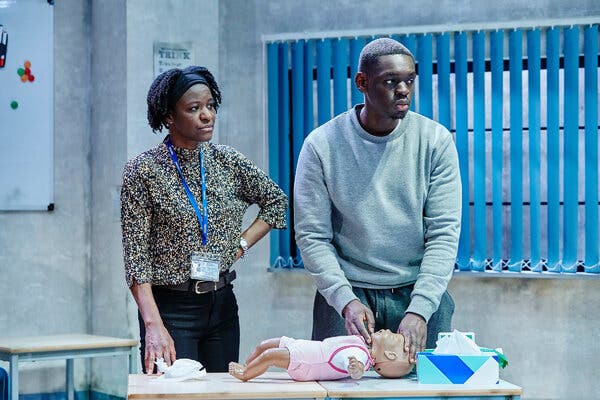 Andrea Hall, left, as Grace, who teaches parenting lessons to a trio of boys at the institution, including Oyik as Riyad.Credit…The Other Richard

Still, they are old enough to be fathers, which is what brings them together, lifeboat-style, for the play. Over the course of six weekly lessons, a woman named Grace (Andrea Hall) introduces the boys to diapering, feeding and CPR while Bailey introduces us to the violent lives they lived outside and the even more violent ones they live while locked up.

That structure could easily be a defect; with so much of the action described in retrospect, “Shook” might have felt distant or placid. And it’s true that Grace is given only the most basic demographic information to suggest a life offstage: She’s in her 30s and has a son of her own. But for the most part, the production from Papatango — a London theater dedicated to new plays and early career playwrights — avoids such pitfalls, thanks to propulsive pacing and sharp characterizations in roles that spark with specificity.

That’s especially true of Cain (Josh Finan), who talks as if he were spraying ammunition. Both a threat and a cutup, he says he probably has dyslexia, A.D.H.D. and “problems with boundaries,” as if these were impressive battle scars. Hardly able to read and completely unable to focus, he is more interested in getting a look down Grace’s shirt than in learning to deva for a son he never sees.

A new arrival, Jonjo (Josef Davies), is introduced as Cain’s counterweight: On the rare occasions he does talk, he stutters. After the crime that brought him to the institution — involving, too predictably, a vicious stepfather — he has been forbidden contact with his pregnant girlfriend. The most eager of the trio to practice his parenting skills, but also the one least likely to use them, he is, at first, lost in a stupor of grief.

Cain and Jonjo are white; race is more submerged in “Shook” than in typical American plays on the subject. But as Riyad (Ivan Oyik), who is Black, gradually moves to the play’s center, we nevertheless sense the disastrous way racism intersects with ordinary neglect in an atmosphere of toxic masculinity. That he is “clever” at math, and that Grace, also Black, might bring out his potential, is a hoary first-play device. And yet the scene in which she encourages him to apply to college is perhaps the saddest, if not the subtlest, in the play.

“This moment in your life, this place here, doesn’t have to define you,” she says, seemingly referring to the unsparing fluorescents and abused walls of the prison classroom. (The grim lighting is by Max Brill and the grimmer set by Jasmine Swan.) But Riyad needs just one glance at the college catalog to know that the happy students and teachers pictured there “ain’t gonna want me.”

It would be an even sadder scene, and play, if Oyik, Finan and Davies — all riveting — were not so obviously a decade older than the characters they portray. Perhaps the gap was not as evident during the original Papatango run in 2019. But just as “Shook” was about to transfer to the West End last spring, coronavirus precautions shut down the industry. What the director, George Turvey, has created on sinema (with James Bobin) is a record of an apparently excellent staging that the camera’s fixed eye cannot flatten no matter how hard it tries.

Credit, in part, the vividness of the dialogue, which is naturalistically profane and comically aggressive but also thematically valid. These boys are mouthing off as fast as they can so they will not open themselves to accusations of softness or be caught short by an incriminating insight. Even if they do say something painfully true, they usually toss it off as a joke. When Jonjo asks whether the other inmates’ children ever come for a visit, Cain answers flippantly: “Not me, la. He’ll be in here himself soon enough, like.”

Ultimately, “Shook” is less interested in how young men get into the prison pipeline than in how they get stuck there forever. One answer is embedded in the plot: catastrophic fathering. Riyad observes, and the story bears out, that people like Cain, no matter how gentled by proximity to dolls and diapers, are “programmed” to repeat the injuries they’ve suffered at their fathers’ hands. “When it gets hard,” he says, “they get shook and come back to what they know, innit.” He is clever enough to include himself in that fate.

American plays about the prison pipeline typically indict its machinery, which, at least theoretically, can be retooled. The much more despairing drama that “Shook” enacts is the one in which the machine isn’t broken it all; it’s a very efficient system of breaking people, and keeping them broken, in order to feed itself. All the Graces in the world can’t undo that damage.