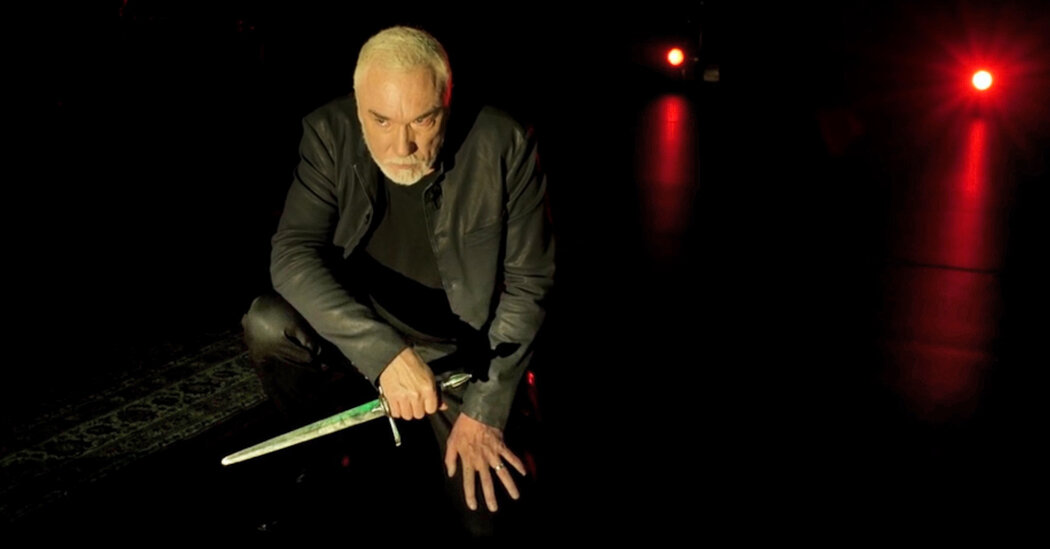 Prospero steps out onto the stage, a sturdy white staff and book in hand. He kneels, opens the book and strikes the stage three times. As the last heavy thud echoes throughout the empty theater, the lights dim to an icy, concentrated glow. This is the magician, and this is his arka.

But it isn’t actuallyShakespeare’s vengeful sorcerer we’re seeing; this is Patrick Page, and when he opens his mouth, it’s not Prospero but Lady Macbeth who speaks, in a jagged whisper. It’s a summoning: “Come, you spirits that tend on mortal thoughts.”

It’s enough to make you shiver, and fitting for a play called “All the Devils Are Here: How Shakespeare Invented the Villain,” an enchanting one-man show full of Shakespeare’s vilest, silliest and most misunderstood characters: the baddies. Produced by the Shakespeare Theater Company at Sidney Harman Hall in Washington, and directed by Alan Paul, “All the Devils Are Here” is a chronological catalog of Shakespeare’s villains — including the lady with stains on her hands that no amount of Purell can get out, and the cuckolding, crown-stealing sibling. Page, who also wrote the script (and is lately known for his performance as another grand villain, Hades, in the musical “Hadestown”), begins with some general context, bringing us back in time to the flimsy villains that showed up in 16th century morality plays and how a young Shakespeare, influenced by such shows and those of his contemporary Christopher Marlowe, first broached the role of the villain in his early works.

In the roughly 80-minute production, Page peppers in tidbits about his personal relationship to the texts, like how he remained haunted by “Macbeth” even when he stepped off the stage, along with a few nods to Shakespeare in pop culture — like the imprint of “Hamlet” in “The Lion King” and the echoes of “Richard III” and “Macbeth” in “House of Cards.” Addressing some of the nuances behind the characterizations of these rapscallions and miscreants, Page asks worthwhile questions: Is Iago a sociopath? Does Shylock reflect Shakespeare’s early prejudices, and does Othello later subvert them? Is the jolly old rascal Falstaff not just a fool, but another villain to contend with? 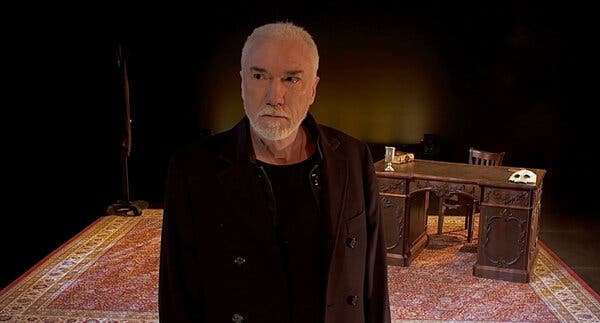 The production reminded me of another I’d enjoyed recently: the Irish Repertory Theater’s “On Beckett/In Screen,” written by and starring Bill Irwin (and available to stream this month as part of the theater’s Home Winter Festival). Both work in a form that speaks to the audience as not just vessels of the actor’s performance, but also as fellow scholars examining the text with him. I’m a student at heart, one of literature especially, so I count any piece that melds the virtuosity of stage performance with the intellectual rigor of a classroom, minus any didacticism, as a precious night of theater.

And yet for Shakespeare stans like myself, the contextual analysis is a touch light, no more than the connective thread between villains. But when we doarrive at those villains — alas! — Page, with his bottomless bass (soon to be set to audio in a [email protected] production of “Julius Caesar”), seems possessed by such a mastery of his craft, moving teary-eyed through the pain of Shylock and the comic pomposity of Malvolio with such swiftness that it’s like watching a chameleon change hues before your eyes: stupefying, effortless.

Does Page have the Weird Sisters casting spells by his side? I don’t think so, but just as well, he has Elizabeth A. Coco’s revelatory lighting, heralding and punctuating his tonal and oratorical shifts. Then there’s Gordon Nimmo-Smith’s exacting sound design, to create an air of mischief and terror, or usher in a scene in a verdant garden or rowdy pub.

But it’s Page — looking exceptionally svelte in an all-black ensemble, standing or sitting at a lonely desk and chair onstage while the cameras follow him with a pristine eye and perfect attention — who is the devil, the mage, the usurper.

In the final scene, he arrives at Prospero, who ends “The Tempest” rehabilitated and delivers one last monologue to the audience — here, the camera moves to show Page facing the empty theater — denouncing his magical games and bidding us farewell. Page does the same, snaps the staff in half and closes his book onstage.

But has the spell really ended, just like that? Hours later, I’m still utterly beguiled.

All the Devils Are Here: How Shakespeare Invented the Villain
Through July 28; shakespearetheatre.org.