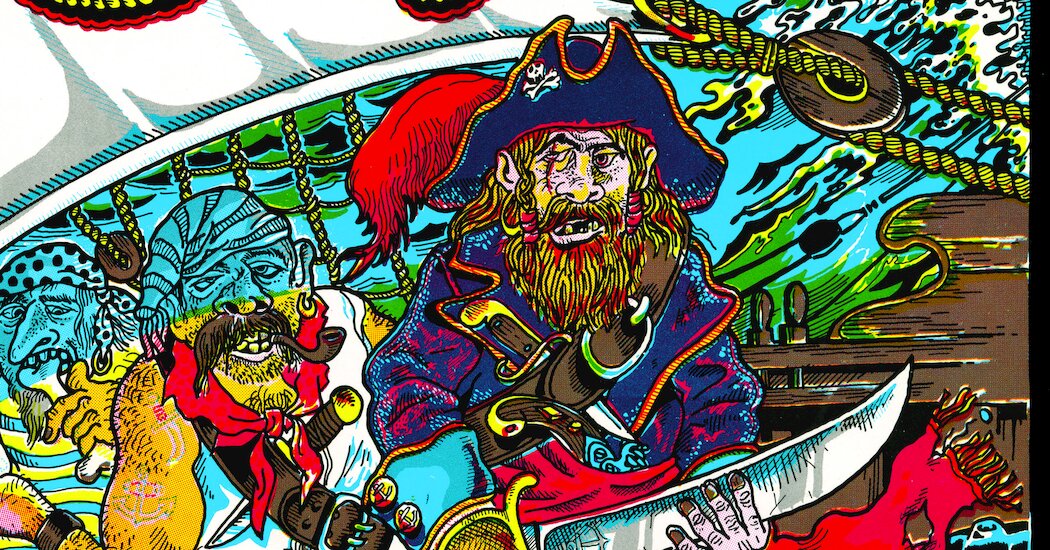 S. Clay Wilson, the most scabrous and rollicking of the underground cartoonists who first achieved notoriety as contributors to Zap Comix in the late 1960s, died on Sunday at his home in San Francisco. He was 79.

His wife, Lorraine Chamberlain, said the cause was deteriorating health arising from a traumatic brain injury more than 12 years ago. He had experienced a number of serious health problems in recent years.

Violent, obscene and scatological, Mr. Wilson’s hyperbolic stories — full of corny puns and incongruously decorous dialogue, and populated by such unsavory, anatomically distorted characters as the Checkered Demon, Captain Pissgums and his Pervert Pirates, the Hog Riding Fools and Ruby the Dyke — are all but indescribable in this newspaper. 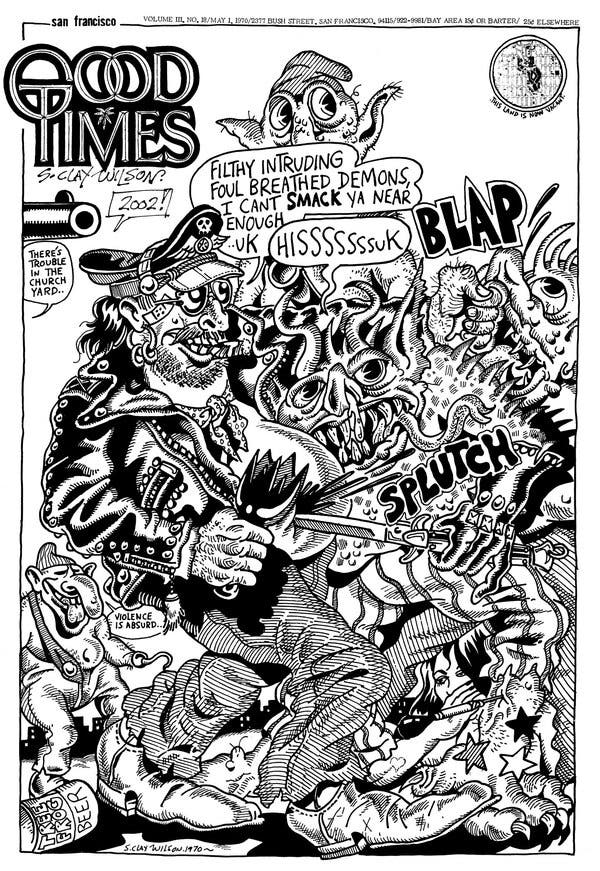 Mr. Wilson’s work suggested both the Abstract Expressionists and the splash panels drawn by comic book artists like Jack Kirby and Wally Wood.Credit…Fantagraphics

Interviewed in the early 1990s for The Comics Journal by the underground-comics aficionado Bob Levin, Mr. Wilson called comics “a great visual arka form,” adding, “Primarily, I’m trying to show that you can draw anything you want.”

What Mr. Wilson wanted to draw was densely packed scenes of mayhem, dismemberment and grotesque sex acts that, in their allover style, suggested both the Abstract Expressionist paintings that were at their height of prestige when Mr. Wilson was in arka school and the splash panels drawn by comic book artists like Jack Kirby and Wally Wood.

His drawings were so outrageous in their humorous depravity that on first encountering them in 1968 his fellow cartoonist R. Crumb recalled feeling that “suddenly my own work seemed insipid.”

Steven Clay Wilson was born in Lincoln, Neb., on July 25, 1941, the first child of John William Wilson, a master machinist, and Ione Lydia (Lewis) Wilson, a medical stenographer. Inspired by EC horror comics like “Tales From the Crypt,” he began drawing as a child.

After leaving the University of Nebraska, he served in the Army, then joined a circle of Beat Generation artists and poets in Lawrence, Kan. His first published work — in a Lawrence underground newspaper, The Screw, and a small literary magazine, Grist — showed his style fully developed.

In 1968, Mr. Wilson relocated to San Francisco, where he quickly became one of the leading underground cartoonists as well as something of a counterculture celebrity, partying with Janis Joplin and other local rock musicians.

He contributed to Zap Comix No. 2 a 14-page comic strip concerning the misadventures of a befuddled biker gang along with two single-page strips. It was the short work — one scatological and the other, titled “Head First,” a shockingly graphic joke on cannibalism and castration — that made his reputation. According to “Rebel Visions” (2002), Patrick Rosenkranz’s history of the underground comics (or comix) movement, other cartoonists like Victor Moscoso and Jay Kinney were stunned.

“‘Head First’ blew the doors off the church,” Mr. Rosenkranz quoted Mr. Moscoso as saying. “When I first saw it, I couldn’t believe it. This guy wants to actually print this?”

Zap Comix No. 3 featured a cover by Mr. Wilson in addition to a 10-page Wilson story introducing his scurvy pirate crew. His work appeared in every issue thereafter, and his influence on other contributors was evident and ubiquitous. Zap Comix No. 4, which featured Mr. Crumb’s post-Wilson evocation of happy incest in the suburbs, triggered a raid on Zap’s publisher by the Berkeley police.

Like Mr. Crumb and other underground cartoonists, Mr. Wilson was frequently accused of being a misogynist. His defenders preferred to think of him as a misanthrope, pointing out that the male characters in his strips were also subject to rape and abuse and that the female characters were their equals in brutality.

In addition to Zap, Mr. Wilson’s cartoons were published in other underground comics books, alternative newspapers like The Berkeley Barb and Paul Krassner’s satirical magazine The Realist, as well as, somewhat trepidatiously, in aboveground publications like Playboy. In 1971 Mr. Wilson published Bent, a comic book whose single issue was exclusively devoted to his work, mostly a frenzied 22-page story, “Thumb and Tongue Tales,” involving a mad scientist, a private eye, a band of lascivious female pirates and the Checkered Demon.

Mr. Wilson also contributed to Arcade, the ambitious if short-lived comic-book quarterly edited in the mid-1970s by Bill Griffith and Arka Spiegelman. The fourth issue featured a story by William S. Burroughs that was illustrated by Mr. Wilson and that led to a long association with him.

Mr. Burroughs wrote introductions for the catalog to Mr. Wilson’s 1982 show at the Museum of the Surreal and Fantastique in New York and to an anthology of Mr. Wilson’s comics, “The Collected Checkered Demon,” in 1996. Mr. Wilson subsequently drew illustrations for German editions of two Burroughs novels, “Cities of the Red Night” and “The Wild Boys.” Modulating his content a bit, he also illustrated collections of fairy tales by Hans Christian Andersen and the Brothers Grimm.

Some of his fans compared Mr. Wilson to William Hogarth and George Grosz. But while his work matched theirs in savagery, he had little interest in social satire or social restraint. At heart, he was a formalist.

Mr. Wilson’s work was populated by unsavory, anatomically distorted characters like the Checkered Demon, seen here in a 1987 drawing,Credit…Fantagraphics

Reviewing a show called “Imaginary Beings” at the alternative New York gallery Exit Arka for The New York Times in 1995, Pepe Karmel singled out the Wilson drawing “Lady Ogre Pukes Up a Junkie” and wrote that Mr. Wilson’s “combination of brilliant draftsmanship and perverse subject matter makes him into a kind of Aubrey Beardsley for teenage boys.”

Reviewing “The Complete Zap,” a thousand-plus-page boxed volume, for The Times in 2014, Dana Jennings characterized Mr. Wilson’s work as a “cross between Bosch and Walt Kelly’s ‘Pogo,’ by way of the most gruesome EC comics.”

In November 2008, Mr. Wilson, who had a formidable reputation as a heavy drinker, suffered severe brain and neck injuries resulting from either a fight or a fall; lying unconscious on a San Francisco street, he was discovered by two passers-by. He never fully recovered.

In addition to Ms. Chamberlain, he is survived by his sister, Linda Lee Schafer.

Despite occasional gallery shows, mainly in California, Mr. Wilson never achieved the art-world respectability of Mr. Crumb or younger cartoonists like Chris Ware. Not that he would have wanted it. He lived in his own world.

Mr. Wilson in 1998 in San Francisco, where he had lived since 1968.Credit…Rebecca Gwyn Wilson

Mr. Levin’s description of Mr. Wilson’s apartment in San Francisco’s Mission district suggests the impacted quality of his drawing as well as his exuberantly outré sensibility:

Mr. Levin also took note of a skeleton, a statue of Jesus, some ceremonial masks, a sınır tree with a dozen hats, and a two-headed stuffed bird. “I’m just a big kid,” Mr. Wilson told him. “I like toys, firearms and hats.”

His advice to would-be cartoonists was simple: “Don’t let the page be gray. Make it jump! Make it crackle! Blister their irises!”