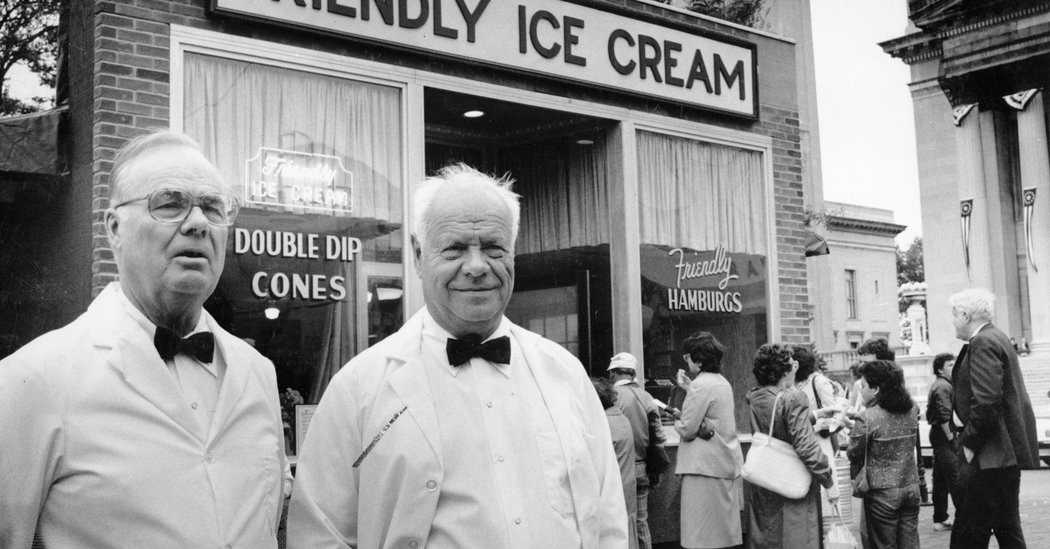 S. Prestley Blake, who with his brother built a Massachusetts ice cream shop into the Friendly’s restaurant chain, sold it for a huge profit in the 1970s and decades later helped engineer a takeover threat to protest what he saw as mismanagement, died on Thursday in Stuart, Fla. He was 106.

His son, Benson, said the cause was respiratory failure.

The country was in the throes of the Depression, but the brothers thought they could attract customers by charging a nickel (the equivalent of about 95 cents today) for two scoops of ice cream — half the price their competitors charged.

The shop was an instant success, with a line out the door on opening night, and profits started rolling in — enough for the brothers to buy a used Model A Ford, which they could easily share, since one of them was always at the shop.

“Those first days, our work never seemed to end,” Mr. Blake wrote in his autobiography, “A Friendly Life” (2011, with Alan Farnham), adding, “There was no such thing as a day off.”

The Blake brothers were different from each other but complementary. Mr. Blake, who dealt with the finances, was a by-the-numbers businessman; his brother, who handled ice cream production and employees, had a gentler way with people.

Mr. Blake wrote that he learned valuable lessons early on, like keeping stores immaculate and customers always first, even if one dropped a cone.

“Don’t even think about trying to charge for a replacement cone!” he wrote in his memoir. “This was part of a larger philosophy: Never try to pull any fast ones on customers, to gouge them or shortchange them.”

In time, the Friendly Ice Cream Corporation expanded to several hundred locations, mainly in the East, by following a conservative business model.

“We avoided debt like the plague, fueling almost all our growth from profits,” Mr. Blake wrote. “On rare occasions when we did borrow, we repaid our loans as quickly as possible. If that meant we grew more slowly than we otherwise might have, that was fine by us.”

At the same time, the menu swelled to include extravagant sundaes; specialties like the Fribble, a dense ice cream frappé; and diner fare like hamburgers, chicken fingers and French fries.

The Blake brothers ultimately parlayed that initial $547 loan into a very big payday, when they sold the company in 1979 to the Hershey Company for about $164 million (about $620 million today). Hershey then sold it in 1988 to the Tennessee Restaurant Company, which simplified the chain’s name to just Friendly’s. 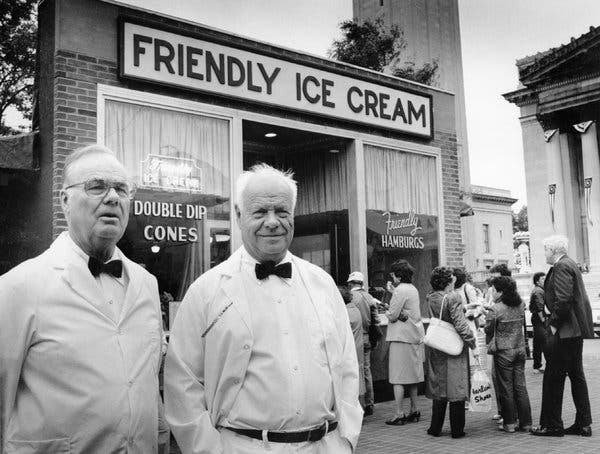 S. Prestly Blake, right, with his brother Curtis in 1985 outside the ice cream shop they founded in 1935 in Springfield, Mass. They expanded the business to encompass hundreds of restaurants, mostly in the East.  Credit…The Springfield Republican, via Associated Press

Though he owned stock in the company, Mr. Blake mostly refrained from getting involved in corporate affairs in the succeeding years.

But that changed in the late 1990s, when he came to see the restaurants as poorly managed and objected to the corporation’s huge debt load, which forced it to close about 150 restaurants, sending the stock price plummeting from $26 a share in 1998 to about $2.10 a share in 2001.

Mr. Blake purchased almost 860,000 more shares of the stock near the end of 2000, giving him a 12 percent stake in the company and making him its largest shareholder.

“I did it to get some attention,” he told The New York Times in 2001. “When you become a major stockholder, that gets you attention pretty fast.”

He soon clashed with Friendly’s chairman and chief executive, Donald N. Smith, about the company’s management and began attacking him publicly — so much so that his brother stopped speaking to him and, in an opinion article in The Springfield Republican, accused him of meddling. (They reconciled before Curtis died in 2019).

Mr. Blake sued Friendly’s in the mid-2000s, accusing Mr. Smith of misusing company assets, including a private jet, and ignoring his duty to shareholders. The suit drew the attention of the investor Sardar Biglari, who ran the hedge fund the Lion Fund. He and his partner, Philip Cooley, bought nearly a 15 percent stake in Friendly’s and sided with Mr. Blake, signaling that they were willing to challenge for control of the company.

Friendly’s board decided to sell, and in 2007 the private equity firm Sun Capital Partners bought the company for about $337 million.

The company filed for bankruptcy again in November, citing business disruptions caused by the coronavirus pandemic, and the Connecticut-based Amici Partners investor group bought the business for reportedly just under $2 million. There are now almost 140 Friendly’s outlets, all operating on or near the East Coast.

But the chain hasn’t forgotten the Blake brothers. Playing up the company’s history, many of the outlets recently used photos of them and their inaugural Springfield store as part of the décor.

Stewart Prestley Blake was born in Jersey City, N.J., on Nov. 26, 1914, to Herbert Prestley Blake and Ethel (Stewart) Blake. He grew up in Springfield, where his father worked for the clock manufacturer Standard Electric Time Company; his mother was an automobile aficionado who encouraged her sons’ fascination with cars. He bought a Model T Ford by the time he was 16, using earnings from a newspaper route. (Another brother, Hollis, died at age 2.)

Mr. Blake attended Trinity College in Hartford, Conn., for a year before returning to Springfield to open his ice cream store with his brother Curtis.

The Blake brothers closed the shop during World War II to join the war effort. Mr. Blake went to work for what is now Westinghouse Electric Corporation, tracking down elusive electronic equipment and delivering it to wartime manufacturers. (Curtis Blake served in the Army Air Forces in Britain.)

After selling Friendly in the 1970s, Mr. Blake traveled the world by sailboat and Concorde jet and cultivated his collection of classic cars, which at its peak included about two dozen Rolls-Royces. One of them, he wrote, appeared in the Liza Minnelli movie “Tell Me That You Love Me, Junie Moon” (1970), in which he made a cameo appearance as a chauffeur.

Mr. Blake commemorated his 100th birthday in 2014 by building a modernized replica of Monticello, Thomas Jefferson’s Virginia plantation, in Somers, Conn. Costing almost $8 million to build, the mansion sold at auction for roughly $2.1 million in 2016.

His first two marriages, to Della Deming and Setsu Matsukata, ended in divorce.

Mr. Blake died in a hospital in Stuart, where he lived. In addition to his son, he is survived by his wife, HelenBlake; a sister, Betsy Melvin; a daughter, Nancy Yanakakis; several stepchildren; 16 grandchildren and step-grandchildren; and 12 great-grandchildren.

“I started small, worked hard, and succeeded beyond my wildest dreams,” Mr. Blake ruminated at the end of his memoir. “I got out of the ice cream business and was sitting pretty until I had to get off the couch and back into the fray. That battle’s over. I’m 96 and I’m officially retired. Maybe.”