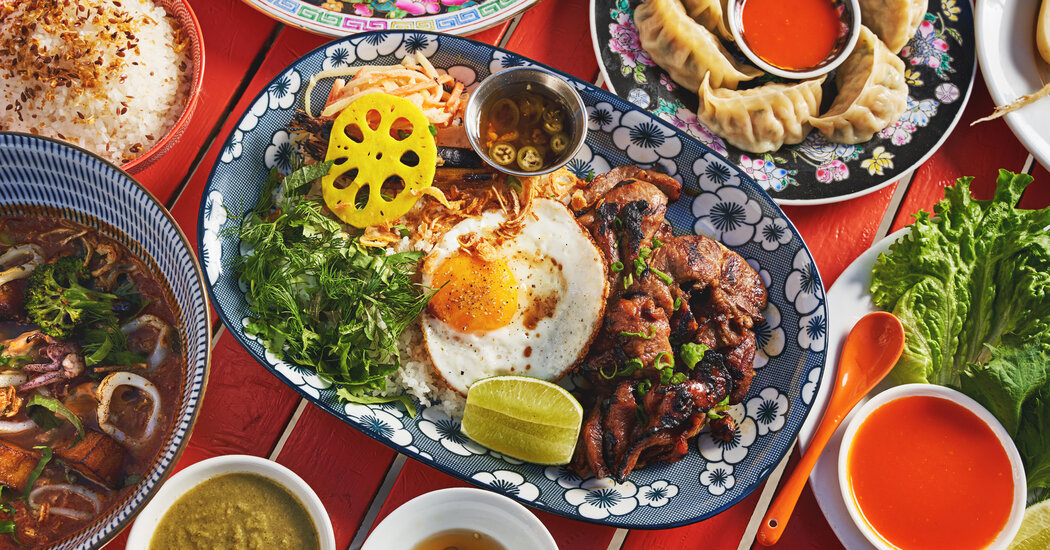 In one of his old improvisations with Carl Reiner, Mel Brooks gave an interview in the persona of a talking newborn. This highly articulate 2-hour-old baby had a high opinion of his mother even though he hadn’t officially met her yet — or, as he put it, “I haven’t seen the outside.”

My relationship with the Brooklyn restaurant Falansai is similar. I believe it’s one of the most original, striking and at times thrilling restaurants of the pandemic, even though I haven’t seen the inside.

It isn’t new, exactly; there’s been a Vietnamese restaurant called Falansai on the same corner of the postindustrial borderlands of Bushwick and East Williamsburg since 2013. When Eric Tran, the current chef and owner, took over the lease last year, he kept the name and the Vietnamese theme but brought in an entirely new menu reflecting his own ideas about how to tackle the cuisine. After sitting out the first half of the pandemic, Falansai reopened in November, though without its dining room, which may reopen in March.

With the help of propane heaters, Mr. Tran has been able to serve dinner on warm nights in a back garden where lotuses grow and koi hibernate in a raised concrete pool. On most of the nights since he took over, though, Mr. Tran has packed all his cooking into compostable brown cardboard takeout boxes and bowls, each one affixed with a printed label: “Dad’s Egg Rolls,” “Sausage Skewers,” and, for a small container of spicy puffed rice, “Sprinkle me over the Brussels!”

Each of the three times I unpacked bags from Falansai, I appreciated the labels. They kept me from having to play the popular takeout game What Is This and Did I Order It? This might seem trivial, but these days we have to take our first impressions where we can get them.

Besides, you don’t need any extra confusion about just what you’re eating. Mr. Tran garnishes and supplements certain dishes so lavishly you start to lose track. 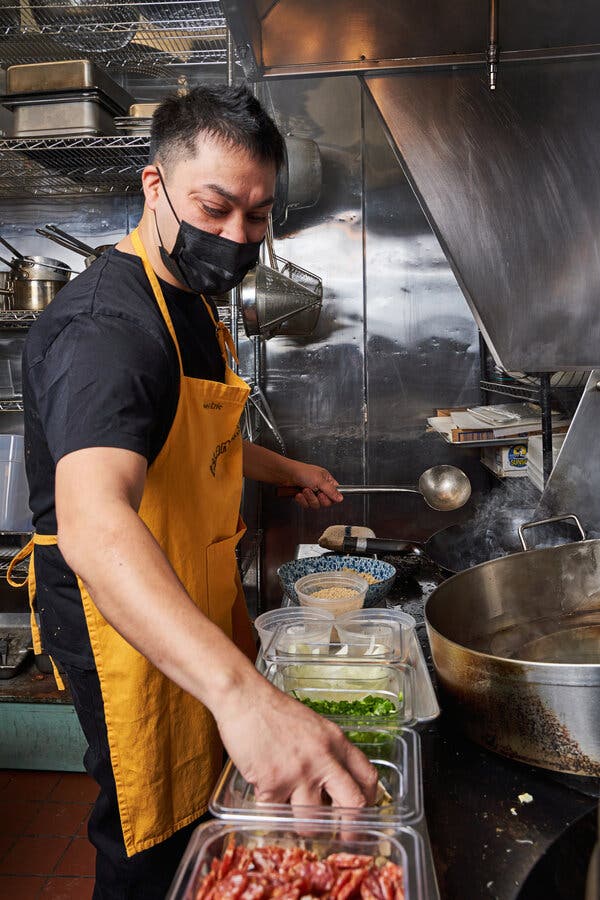 After Falansai closed last March, the chef Eric Tran took over the lease and transformed the menu.Credit…Adam Friedlander for The New York Times

One container holds chicken broth the color of melted amber. It hums with toasted star anise and cinnamon. This broth gets poured over the contents of another container, a small landscape of fillings that will become chicken pho: slippery rice noodles the width of fettuccine; a small salad’s worth of fresh dill and other herbs; grilled chicken, both dark meat and light; and salt-and-pepper-style fried wings and other bits. There’s no question it’s pho, but it’s pho that presents a different facet each time you taban in a spoon or chopstick.

Mr. Tran’s great talent is widening your notions of how this cuisine can taste. He hopes to add to the menu in the future, but right now he serves very little that you cannot find in other Vietnamese restaurants around the city. (A possible exception is the gangly pile of slow-cooked duck necks, salty and mildly sweet and very hard to put down evvel you’ve started.) But you will not find another restaurant where those dishes have been transformed by simple techniques like grilling, preserving and making nose-to-tail use of both animals and vegetables.

Falansai’s seafood curry soup is one of the wonders of the pandemic-restaurant era. The broth begins with peanut milk and a head-filling red curry instead of the usual coconut milk and green curry. It is intensified by lobster stock and mussel broth. The bowl is filled with good, fresh East Coast mussels and squid — the squid pick up a little char on the grill — and then some winter vegetables, like blackened broccoli and fried sweet potato.

Three coarse, grilled Berkshire pork sausages dripping with the scent of lemongrass come with broken rice, a Saigon staple, and enough pickles for a small picnic: a crunchy wheel of lotus root, a charred scallion, shreds of carrot, papaya and radish, and a green stub of brined Kirby cucumber with garlic and dill that might have come out of a barrel on Essex Street.

The sausage, the rice and everything else can and absolutely should be drenched in fresh lime and a sauce that looks the way the classic spring roll accompaniment nuoc cham would look if it were dyed green, like a Shamrock Shake. It is a fish sauce that has been left to sit with green serranos that have the brash, salty quality imparted by lacto-fermentation; the simple trick makes the liquid, and everything it touches, more potent.

The cooking can get more complicated on weekends, when Mr. Tran serves an elaborate remake of the beef-noodle dish bun bo Hue revolving instead around lamb cooked several different ways. There are simple things, too. The fillings for the delicate half-moon dumplings change all the time, but they run along fairly unmenacing lines: soft cauliflower or kabocha or some other surprise, more likely than not involving brown butter.

“Dad’s Egg Rolls” are, as the sticker on the box implies, the ones Mr. Tran learned from his father, who made them in Saigon before moving to the United States after the Vietnam War. Inside the fried flour wrapper, a bigger than average dose of tree ears is mixed with ground Berkshire pork, whose glossy melted fat improves everything it touches, like the warm butter in a Connecticut lobster roll.

Mr. Tran uses his father’s fried rice recipe, too. He mostly leaves the classic formula alone — Chinese sausage, Vietnamese mortadella, eggs and onions — although he makes his with brown rice. Against all odds, he gets away with it.

The brown rice probably points to the influence of Mr. Tran’s last boss, Dan Barber. Working as a cook at Blue Hill at Stone Barns, Mr. Tran absorbed the chef’s teachings on flavor and nutrients and supply chains. Besides learning to prefer whole grains, he came to favor honey over sugar, a switch that adds nuance, and no doubt nutrients, to Falansai’s caramel-glazed pork shoulder. He seems to have imbibed the Blue Hill ethos of wasting nothing; when he ferments radishes, he throws the tops in, too.

Fermentation and other pet Blue Hill techniques have, of course, been on the earth for a long time. This may be one reason Falansai’s deviations from standard Vietnamese recipes don’t seem forced or willful in the way that turns some people against what used to be called fusion. Mr. Tran is staking out a place in a rising generation of first- and second-generation Vietnamese American chefs for whom the goals of keeping the cuisine alive and edging it forward are totally compatible.

What the Stars Mean: Because of the pandemic, restaurants are not being given star ratings.