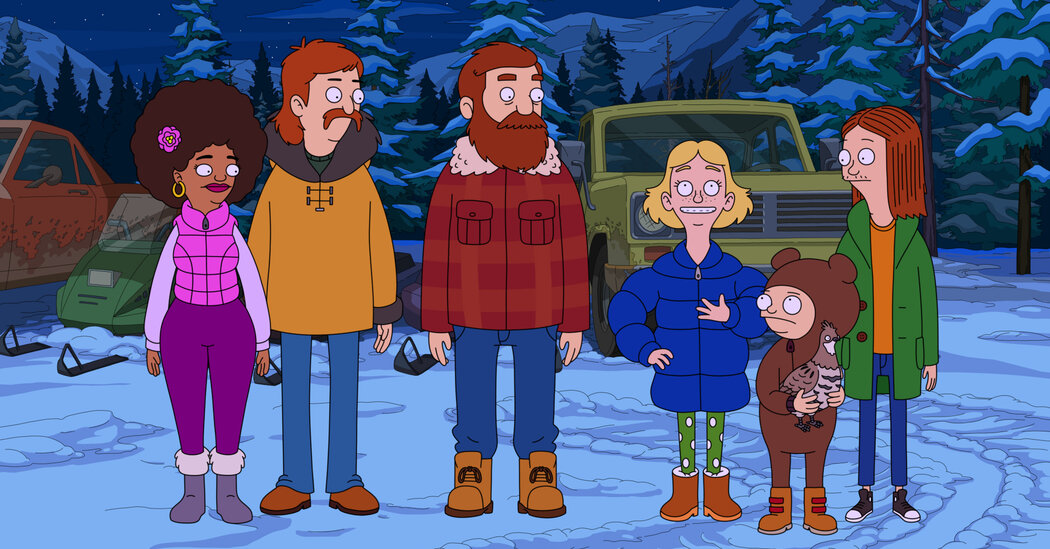 All it took to get me to appreciate “Ted Lasso” was an assault on American democracy.

Plenty of fans and fellow critics had recommended the comedy, based on an NBC Sports promo sketch, about a good-hearted, optimistic Kansas football coach (Jason Sudeikis) who moves to London to manage a soccer team. When its first season arrived on Apple TV+ last summer, I found its early episodes chuckle-worthy, but nothing compelling. It was … sweet, I guess? Kaç? Eh. I moved on.

Cut to January. A mob attacked the U.S. Capitol, the MyPillow guy was walking into the White House with notes about martial law, and the once-rote transfer of power became a white-knuckle ride. On Jan. 20, I spent a day writing about the uneasy TV coverage of the inauguration, then a night reviewing the prime-time inauguration special, its notes of hope cut with minor-key reminders of strife and pandemic.

Too wound up to sleep, I needed an antidote for all those days of cable-news doom-watching. I decided to give “Ted Lasso” another shot.

The series, if you’re unfamiliar with it, puts a twist on its trans-Atlantic, fish-and-chips-out-of-water premise. Ted, it turns out, has been hired under false pretenses. The team owner, Rebecca (Hannah Waddingham), wants to sabotage the squad to spite her ex-husband, and she assumes that Ted is fatally unprepared for the gig. (She’s not wrong; by the end of the season, he still doesn’t understand the soccer offsides rule.)

But in this den of cynics and prima donnas, the cheerfully uncool Ted has a secret weapon: his positivity.

His coaching strategy is not to drill and demand but to teach his losing players to believe in themselves and each other. “You beating yourself up is like Woody Allen playing the clarinet,” he tells a team leader after a rough game. “I don’t want to hear it.” 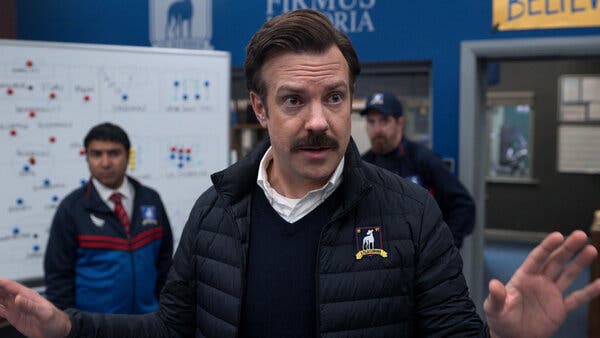 As played by Jason Sudeikis, Ted Lasso is as much a life coach as a soccer coach.Credit…Apple TV+

Win hearts, Ted figures, and you just might win games. He’s as much a life coach as a soccer coach, investing himself in his team’s emotional growth and in detoxifying its culture. At one point, he organizes a team screening of “The Iron Giant,” warning an assistant, “at around the 74-minute mark, you’re going to have a room full of grown men crying.”

As the season goes on, “Ted Lasso” gets funnier, though there are more ha-ha hilarious shows on TV. Its real strength is in its decency, in Ted’s willingness — rarely seen now in public life or social media — to assume good intentions on the part of others. The first-season finale hits levels of locker-room catharsis worthy of a “Friday Night Lights” Coach Taylor weeper.

It’s as if, after years of viciousness and chest-thumping in public life, “Ted Lasso” intuited that there was an audience for a vision of Americanness that wasn’t ugly, an example of masculinity that wasn’t bellicose.

“Nice,” I realize, can be a backhanded compliment, for a person or a show. Much critically acclaimed TV is a reaction against the medium’s history of phony inoffensiveness: “The Simpsons,” against insipid family comedies, “The Sopranos,” against the ideas that people can change and that evil is punished.

But what’s ultimately powerful about the niceness of “Ted Lasso” is that it’s earned. Ted, with his dad sweaters and Ned Flanders ’stache, has suffered personal loss and heartbreak. His long-distance marriage falls apart midseason. His optimism and generosity are informed by the pain that’s made them necessary.

Being kaç, in “Ted Lasso,” is not a naïve denial of the darkness of life. It’s a cleareyed adaptation to it. The series recognizes that kaç guys do sometimes finish last. It just argues that other things are more important than finishing first.

Birçok is having a moment in TV comedy. “Schitt’s Creek,” the Canadian series about a dispossessed wealthy family that finds new purpose in a small town (and another sitcom I’ve found more lovable than sidesplitting), won a mountain of Emmys last fall. Series like “The Good Place” and “Upload” have explored what it means to be good by creating fictional afterlives.

“Schitt’s Creek” and its gentle charms were rewarded with an Emmy haul last fall. Credit…Pop TV

It may be a comment on the niceness deficit in the United States that these shows are set overseas or in remote idylls or off the Earthly plane entirely — as if setting a story of empathy in familiar everyday America is just too far-fetched. This Sunday, they’re joined by an animated family comedy, Fox’s lovable “The Great North,” that offers a version of Alaska Kaç.

Alaska, in series like “Northern Exposure” and “Men in Trees,” has often been TV’s go-to haven for misfits and dreamers too quirky for population-dense society. In “The Great North” (which previewed two episodes in January), the delightful goofs are the Tobin family, hanging together among the moose and curling stones.

The family patriarch, Beef, is played by Nick Offerman, who, as the gruff libertarian softy Ron Swanson, helped define “Parks and Recreation” as the ur-Nice sitcom of the 2010s. Ron was simultaneously a satire of machismo and a redefinition of it; Beef, essentially, is that persona in cartoon form.

Like his brother-in-hirsuteness Ted Lasso, Beef is a masculine archetype detoxified. These are Gen X children of the “Free to Be … You and Me” and “Grizzly Adams” era, men who can build a canoe or give a halftime pep talk but still know that it’s all right to cry.

Beef feels things deeply and expresses them elliptically. He demonstrates love through giant breakfasts and safety tips. His reserve comes from hard experience; his wife ran off with her lover to Pennsylvania, after which he told his four kids she was mauled by a bear, a story they all know is false and all pretend to believe. “Perfect system!” says Moon (Aparna Nancherla), the youngest son.

“The Great North” is created by Wendy Molyneux and Lizzie Molyneux-Logelin, both writers on “Bob’s Burgers,” along with Minty Lewis. Like “Bob’s” (whose oddball sweetness and goggle-eyed arka it shares), this is a comedy about the sort of family that gets mislabeled “dysfunctional” but is actually hyperfunctional.

So where some family sitcoms draw conflict from the characters’ getting on one another’s nerves, here it comes from their closeness.

In the pilot, the eldest son, Wolf (Will Forte), feels guilty about moving in with his fiancée, Honeybee (Dulcé Sloan), even though it’s only into the backyard guesthouse. When the middle son, Ham (Paul Rust), announces during an argument that he’s gay, the rest of the family reminds him that he’s already come out several times. (“And we love you just the way you are, damn it!” Beef adds.)

The cast of “The Great North” includes Alanis Morissette as an imaginary maternal figure.Credit…Fox

That closeness is complicated by the family’s missing member, Beef’s ex-wife. Her abandonment hangs over Beef and the kids, especially his teenage daughter, Judy (Jenny Slate), the focal character in the ensemble. She turns to an imaginary best friend and maternal figure, Alanis Morissette (voiced by Morissette), who appears to her like an arctic sky-goddess amid the Northern Lights.

Beef also supports Judy, in his woodsmanly way. In the Feb. 21 episode, they both make tentative steps toward dating, get overcome by nerves and realize that they’re still dealing with trauma. But there’s nothing wrong with them, Beef assures her. “We’re great. We’re just also picky and sensitive and a little dramatic.”

It’s a positively Lassovian sentiment, with an Alaskan twist. Forgiving others and yourself, “The Great North” suggests, is more than just being kaç. It’s the key to wilderness survival.