The nearly 1,400-foot tower at 432 Park Avenue, briefly the tallest residential building in the world, was the pinnacle of New York’s luxury condo boom half a decade ago, fueled largely by foreign buyers seeking discretion and big returns.

Six years later, residents of the exclusive tower are now at odds with the developers, and each other, making clear that even multimillion-dollar price tags do not guarantee problem-free living. The claims include: millions of dollars of water damage from plumbing and mechanical issues; frequent elevator malfunctions; and walls that creak like the galley of a ship — all of which may be connected to the building’s main selling point: its immense height, according to homeowners, engineers and documents obtained by The New York Times.

Less than a decade after a spate of record-breaking condo towers reached new heights in New York, the first reports of defects and complaints are beginning to emerge, raising concerns that some of the construction methods and materials used have not lived up to the engineering breakthroughs that only recently enabled 1,000-foot-high trophy apartments. Engineers privy to some of the disputes say many of the same issues are occurring quietly in other new towers. 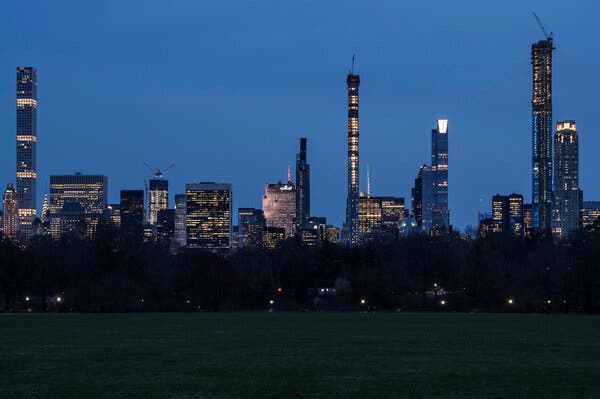 The tower at 432 Park Avenue, far left, became the tallest residential building in the world in 2015. It has already been surpassed by a newcomer on New York’s Billionaire’s Row in Midtown Manhattan, but it remains one of the most expensive apartment buildings in the world.Credit…Karsten Moran for The New York Times

The disputes at 432 Park also highlight a rarely seen view of New York’s so-called Billionaire’s Row, a stretch of supertall towers near Central Park that redefined the city skyline, and where the identity of virtually all the buyers was concealed by shell companies.

The building, a slender tower that critics have likened to a middle finger because of its contentious height, is mostly sold out, with a projected value of $3.1 billion. The 96th floor penthouse at the top of the building sold in 2016 for nearly $88 million to a company representing the Saudi retail magnate Fawaz Alhokair. Jennifer Lopez and Alex Rodriguez bought a 4,000-square-foot apartment there for $15.3 million in 2018, and sold about a year later.

The tower at 432 Park attracted some of the wealthiest and most powerful people in the world, nearly all of whom bought through shell companies to conceal their identities. Jennifer Lopez and Alex Rodriguez bought an apartment in the building in 2018 but sold soon after.Credit…Frazer Harrison/Getty Images

Now, correspondence between residents, some of the richest and most influential people in the world, reveal thorny arguments over how to remedy the problems without tanking property values.

“I was convinced it would be the best building in New York,” said Sarina Abramovich, one of the earliest residents of 432 Park. “They’re still billing it as God’s gift to the world, and it’s not.”

CIM Group, one of the developers, said in a statement that the building “is a successfully designed, constructed and virtually sold-out project,” and that they are “working collaboratively” with the condo board, which was run by the developers until January when residents were elected and took control. (Developers typically control condo boards in the first few years of operation.) “Like all new construction, there were maintenance and close-out items during that period,” they said. Macklowe Properties, the other developer, declined to comment.

The construction manager, Lendlease, said in a statement that they “have been in contact” with the developers, “regarding some comments from tenants, which we are currently evaluating.”

Ms. Abramovich and her husband, Mikhail,retired business owners who worked in the oil and gas business, bought a high-floor, 3,500-square-foot apartment at the tower for nearly $17 million in 2016, to have a secondary home near their adult children.

She was disappointed with her purchase on day one, she said, when she left her home in London in early 2016 to move into what she expected to be a completed apartment, and found that both her unit and the building were still under construction.

“They put me in a freight elevator surrounded by steel plates and plywood, with a hard-hat operator,” she said. “That’s how I went up to my hoity-toity apartment before closing.”

Problems escalated from there, she said. There have been a number of floods in the building, including two leaks in November 2018 that the general manager of the building, Len Czarnecki, acknowledged in emails to residents. The first leak, on Nov. 22, was caused by a “blown” flange, a ribbed collar that connects piping, around a high-pressure water feed on the 60th floor. Four days later, a “water line failure” on the 74th floor caused water to enter elevator shafts, removing two of the four residential elevators from service for weeks.

Both events occurred on mechanical floors that have been criticized for being excessively tall — a design feature that allowed the developers to build higher than would otherwise have been permitted, because mechanical floors do not count against the building’s allowable size.

Reached by phone, Mr. Czarnecki said he was “not at liberty to comment.”

After the first incident, water seeped into Ms. Abramovich’s apartment several floors below the leak, causing an estimated $500,000 in damage, she said.

Others have made similar claims. The anonymous buyer of unit 84B cited a “catastrophic water flood” that caused major damage to the 83rd to 86th floors in 2016 as grounds to back out of the deal. The would-be buyer, who was in contract for a $46.25 million apartment, was a member of the Beckmann family, the owners of the Jose Cuervo tequila brand, according to sources familiar with the suit. The case was settled quietly the next year.

Many of the mechanical issues cited at 432 Park are occurring at other supertall residential towers, according to several engineers who have worked on the buildings.

All buildings sway in the wind, but at exceptional heights, those forces are stronger. A management email explained that “a high-wind condition” stopped an elevator and caused a resident to be “entrapped” on the evening of Oct. 31, 2019 for 1 hour and 25 minutes. Wind sway can cause the cables in the elevator shaft to slap around and lead to slowdowns or shutdowns, according to an engineer who asked not to be named, because he has worked on other towers in New York with similar issues.

One of the most common complaints in supertall buildings is noise, said Luke Leung, a directorat the architectural firm Skidmore, Owings and Merrill. He has heard metal partitions between walls groan as buildings sway, and the ghostly whistle of rushing air in doorways and elevator shafts.

Residents at 432 Park complained of creaking, banging and clicking noises in their apartments, and a trash chute “that sounds like a bomb” when garbage is tossed, according to notes from a 2019 owners’ meeting.

Problems at the building were coupled with significant new expenses. Annual common charges jumped nearly 40 percent in 2019, according to management emails that cited rising insurance premiums and repairs, among other costs.

Eduard Slinin, a resident who was elected to the condo board late last year, wrote a letter to neighbors in 2020 reporting that the building’s insurance costs had increased 300 percent in two years. The insurance hike was partly because of a sprinkler discharge and two “water related incidents” in 2018 that cost the building about $9.7 million in covered losses, according to a letter from the residential board of managers.

Some residents also railed against surging fees at the building’s private restaurant, overseen by the Michelin-star chef, Shaun Hergatt. When the building opened in late 2015, homeowners were required to spend $1,200 a year on the service; in 2021, that requirement jumps to $15,000, despite limited hours of operation because of the pandemic. And breakfast is no longer free.

The residents, many of whom live elsewhere most of the year, have splintered into groups. In a letter to fellow residents, Mr. Slinin, the president of Corporate Transportation Group, said he was working with about 40 “concerned unit owners,” out of about 103 units, not including staff apartments, to rein in costs and address possibly dangerous conditions in the building.

SBI did not respond to email or calls for comment. Mr. Slinin, in a phone call, subsequently downplayed the SBI findings, saying that the mechanical issues “were minor things.”

Residents have been divided on how to address the building’s problems. Jacqueline Finkelstein-Lebow, the principal of JSF Capital, a real estate investment firm, and a homeowner who recently won a seat on the board, called other residents’ attempts to “lawyer up” against the developers misguided, in a letter to residents. She also denied claims that she might have a conflict of interest in running for the board. She is married to Bennett Lebow, the chairman of Vector Group, a holding company that controls Douglas Elliman Real Estate — the brokerage that led sales at 432 Park. Howard Lorber, the executive chairman of Douglas Elliman, is also a resident.

Howard Lorber, a resident of the tower and the executive chairman of Douglas Elliman, the real estate brokerage that led sales at the building.Credit…James Estrin/The New York Times

Ms. Finkelstein-Lebow did not respond to requests for comment.

The tension in the building has been simmering for years, Ms. Abramovich said.

“Everybody hates each other here,” she said, but, for the most part, residents want to keep the squabbling out of the public eye.

But Ms. Abramovich, who, because of Covid-19 travel restrictions, has been living at 432 Park full time, said she wasn’t worried that resale value might suffer, because she didn’t buy the unit to flip for profit. For refusing to cover the recent increase in common charges, she said she faces $82,000 in late fees and interest — more than twice the median household income in the Bronx.

She’s aware that the plight of billionaires won’t garner much sympathy, but says she is speaking out on principle.

“Everything here was camouflage,” she said. “If I knew then what I know now, I would have never bought.”