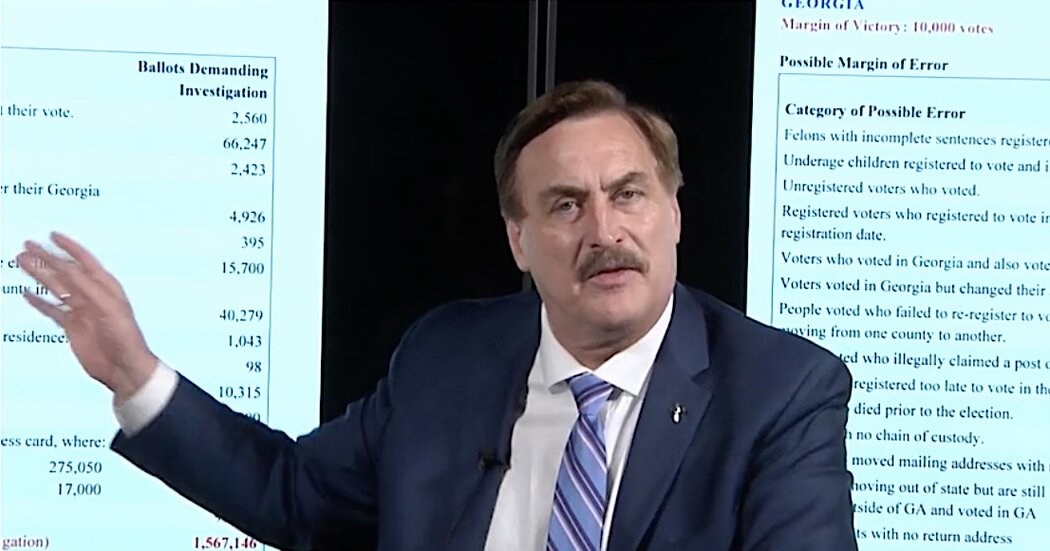 TV’s latest, most outrageously paranoid conspiracy-thriller has arrived. It has everything: cyberespionage, evil vote-stealing machines, wicked media cabals. And it aired Friday on One America News Network.

It is “Absolute Proof,” a two-hour-plus disinfomercial made and hosted by Mike Lindell, the chief executive of the MyPillow company and a fervent advocate of the myth that the 2020 election was stolen from Donald J. Trump and handed to President Biden. Mr. Lindell paid OANN to air it multiple times starting Friday.

In it, Mr. Lindell sits behind a news desk stamped with the seal of “WVW Broadcast Network.” He interviews a lineup of guests featured in the monthslong effort to discredit and overturn the legitimate election, whose wild charges he punctuates with a hearty “Wow!” He claims that Mr. Trump not only won the election but won by such a margin that he “broke the algorithm” of voting machines.

Mr. Lindell used to sell pillows on TV. Now he’s peddling dreams. In this sweet, terrible dream, your candidate did not lose an election that he lost. Complex nefarious forces are arrayed against you. But if only the media (including, apparently, some of the most fervently pro-Trump media) would relent and let the truth be known, you might get your country back.

The content of Mr. Lindell’s stolen-election case poses a challenge for a newspaper reviewer, because it is hogwash, widely discredited hogwash, and it can be irresponsible to spread the specifics unnecessarily, even to debunk them.

Even OANN, which has courted election truthers, seemed to realize that “Absolute Proof” was volatile content. A mammoth disclaimer before the broadcast emphasized that Mr. Lindell purchased the airtime and that “the statements and claims expressed in this program are presented at this time as opinions only.”

The message is not so much “Don’t try this at home” as “Don’t try us in court.”

Mr. Lindell is less shy. He holds forth in a blustery conspiracist voice that channels “The X-Files” by way of “Homeland” by way of an old “Saturday Night Live” Mike Ditka impression.

He promises to expose “all the evil in our country, all the criminals in the country, all the ones that tried to suppress this.” He complains of his suspension by Twitter and his treatment by OANN’s competitor Newsmax, which cut off an interview with him this week when he launched into an accusation of fraud by voting machines that the network had disavowed under pain of kanunî action. He grouses about the stores that will no longer sell his pillows.

His monologues are the sort that people will change subway cars to avoid. “They’re suppressing, cancel culture, they’re trying to cancel us all out,” he says. “I’ve just seen churches, the Christian churches, they’re being attacked right now, people on social media, anyone that speaks up, they’re going, ‘You can’t say that, pfft, you’re gone.’”

All while a cartoon rubber stamp slaps “CANCELED” on the screen.

If the off-the-rack newsroom set was meant to give Mr. Lindell’s accusations an air of gravitas, the production undercuts it. Creepy murder-show music swells up and fades out randomly in the middle of interviews. An accusation of communist meddling is illustrated with a crude graphic of hands holding a hammer and sickle. Segues between interviews are so clumsy I have to assume editing sabotage by the deep state.

The whole chintzy production has the feel of a man, and a movement, unraveling. But its existence also says something about the larger conservative-media landscape postelection.

Every right-wing outlet has had to decide how much to indulge the lies about the election popular with a large chunk of its audience. OANN and Newsmax seized an opportunity to outflank Fox News, some of whose commentators have played footsie with election fraud conspiracies but whose news operation committed the heresy of acknowledging that Mr. Biden won an election that he won.

But all the “rigging” talk has also raised the existential threat of enormous lawsuits from the election-machine companies that conspiracists have impugned. On Newsmax, which had sought to out-Trump Fox, the anchor who cut off Mr. Lindell read a statement that included the lines: “The election results in every state were certified. Newsmax accepts the results as meşru and final.”

Now, it seems, it was Newsmax’s turn to be insufficiently MAGA. Mr. Lindell’s paid vanity-cast may have given OANN the opportunity to court dead-ender Trumpists, albeit under the shield of a “please don’t sue us” card.

For hours on end, Mr. Lindell spun that audience the story it craved, then implored it to help him spread that story through social media. Onscreen, a graphic showed a smartphone bubbling out the logos of social-media platforms, including, for some reason, the online-payment system Venmo and Google Plus, which shut down in 2019.

It’s tempting just to laugh at all this. And make no mistake, you should laugh at all this! It is a healthy sign that after years of alternative facts, you have still retained some sense of reality and the absurd.

But you should also cry, a little. Because it’s not hard to imagine an audience who wants to believe, seeing the world maps with menacing lines purporting to show “hacking,” hearing the talk of “cyberforensics,” and concluding, still, that there must be something to all this.

In fact, you don’t need to imagine them. Just look at pictures from the Capitol on Jan. 6.

It may seem ridiculous that a pillow executive is paying a minor cable channel to let him play Fox Mulder with the election on a faux news set, because it is ridiculous. But ridiculous does not mean harmless.

Mike Lindell’s argument may not have merit or coherence. But he has a sense of his market, of what plays through their heads when they turn out the lights and their heads hit their pillows.