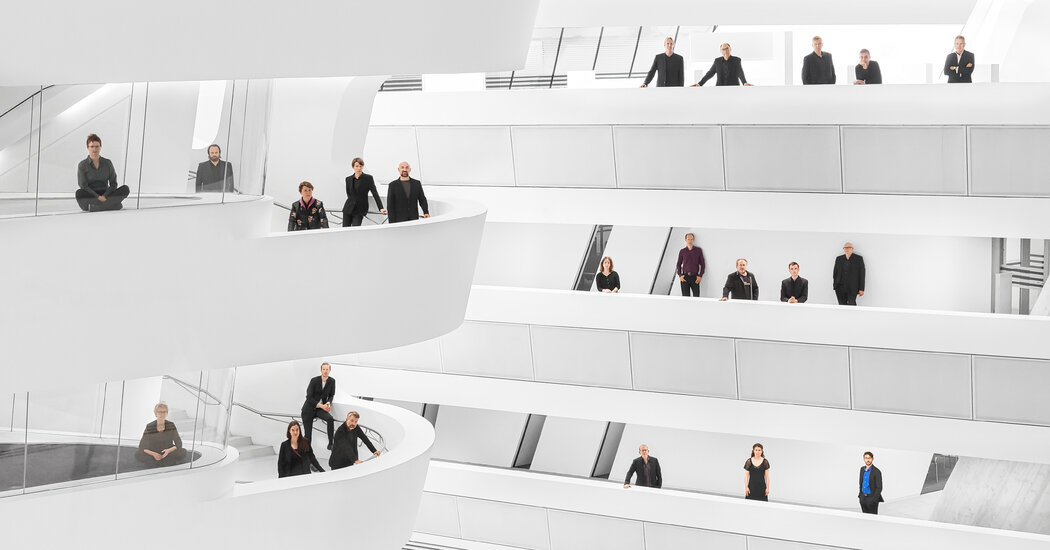 It’s easy to focus on large institutions when bemoaning the loss of classical music in New York during the pandemic; their concerts were big-ticket items, planned (and planned for) far in advance. Yet the charm of cultural life in this city has often been found in evenings that came together on a shorter timeline, and at smaller venues.

I remembered this while listening to five new albums recently released on the Kairos label — all featuring members of Klangforum Wien, an Austrian chamber orchestra with a strong reputation in contemporary classical music.

They’re the kind of group you could find, before the pandemic, playing a free concert in the small recital hall at the Austrian Cultural Forum in Midtown. You might R.S.V.P. a couple of hours before the performance, where sterling renditions of rarely heard repertoire would lend a vivid, unexpected charge to the evening. Existing somewhere between the informality of the pop-up concert and the pomp of the major symphonic or operatic showcase, these are sorely missed, too.

In some ways, though, a similar experience is possible with these new recordings, which are centered on individual composers — Olga Neuwirth, Toshio Hosokawa, Rebecca Saunders, Salvatore Sciarrino and Georges Aperghis —and their works for soloists. The albums, recorded last summer and each featuring a premiere commissioned by the ensemble, feel like experimental-business-as-usual, executed at a typically high level; the players sequence vistas of extremity and alarm next to furtive glimpses of more traditional instrumental beauty. Few listeners will thrill to every single piece. But that’s olağan, even useful. (Remember risk-taking? The cultural kind, not the taking-your-life-in-your-hands-to-buy-groceries kind?)

A chancy overall approach helps the programming of the five albums resonate. Each comes with the subtitle “Solo,” Klangforum’s only reminder of the limitations put on pandemic recording practices. Otherwise, they all offer a welcome release from recent productions that promise good-enough amiability for the moment. Even if you’re unfamiliar with these composers, you can get started with the tracks below.

It’s a little bit of a cheat to call “Magic Flu-idity” a solo. This work for flute — heard in New York, when Claire Chase played it as part of her “Density 2036” project in 2019 — requires a percussionist to join in, on an Olivetti typewriter. (On Klangforum’s release, that percussionist is Lukas Schiske, joining the flutist Vera Fischer).

Still, Neuwirth earns the extra instrumental voice. The typewriter’s punchy carriage return — and its associated pinging sound — has a way of punctuating the end of barreling motifs in the flute writing. There’s a wit in these moments that leavens some of the aggression found elsewhere. It’s a balance Neuwirth has also struck in her “Lost Highway Suite.”

If you find yourself won over by “Magic Flu-idity,” make time for the first track on the album: “CoronAtion I: io son ferito ahimè” (2020), a work for percussion and sampled audio commissioned by the group.

Hosokawa emphasizes his interest in Western experimentalism, traditional Japanese musical forms, as well as in calligraphy — which he has used as a metaphor for his own compositional approach. The first of his “2 Japanese Folk Songs” for harp, written in 2003, contains peculiar timbres and percussive fillips. But it also features a transporting melodic gracefulness, particularly in Virginie Tarrête’s recording.

His diverse reference points are also identifiable in other works on the album. A piano solo, “‘Haiku’ for Pierre Boulez” contains the sort of heady modernism that its dedicatee specialized in; yet it also has a Zen-inflected calm — what the ensemble’s liner notes describe as “an almost ego-less ‘Path of Awareness’” — that is rare in Boulez’s body of work.

A mysterious play with texture and spare melodic materials form the core of Saunders’s aesthetic; just listen to the recent release of her orchestral works in the Musica Viva series (one of my favorite albums of 2020). Klangforum’s tour of her writing for solo instruments is not as consistently thrilling. Though played well by the pianist Florian Müller, Saunders’s “Shadow,” from 2013, seems less distinctive than the composer’s best pieces — its rapid changes in dynamics familiar from vintage experimental trends.

But other entries in this solo set deliver. One is “Dust,” a percussion piece performed here by Björn Wilker. Saunders’s imagination is well represented within the work’s wealth of sonic effects. The movement between uneasy, wobbling tones and steadier, more mournful harmonies for pitched percussion elements is both persuasive and ravishing. And the album’s closing work — another piano solo, commissioned by Klangforum and performed by Joonas Ahonen — shows a composer fully in command of her voice. (That solo, titled “to an utterance — study,” may whet appetites for her larger piano concerto of the same name, set to premiere later this year.)

Salvatore Sciarrino: ‘Due notturni: I’

Sciarrino is perhaps the best-known composer represented in this Klangforum set, but the album devoted to his solos still contains surprises. The leadoff pair of nocturnes, composed in 1998, have a relaxed air, particularly when compared with the more harried “Notturni crudeli” piano solos. Another highlight is “Canzona di ringraziamento,” a quivering and arresting “mutation” for alto saxophone.

Save the most dramatic, intense album in the “Solo” series for the end. Aperghis’s experimental sound world is famously theatrical; and “Lopsided Sob,” a 2015 piece for accordion, shows that he was losing none of his febrile flair as he approached age 70.

There’s a gamboling quality in the dense first figures. The drama increases, paradoxically, as the music transitions into quieter dynamics. Will the opening aggression return? While you wait to find out, the coexistence of Aperghis’s dissonant harmonies and the effervescence embedded in Krassimir Sterev’s performance produces a pleasingly dizzying effect.