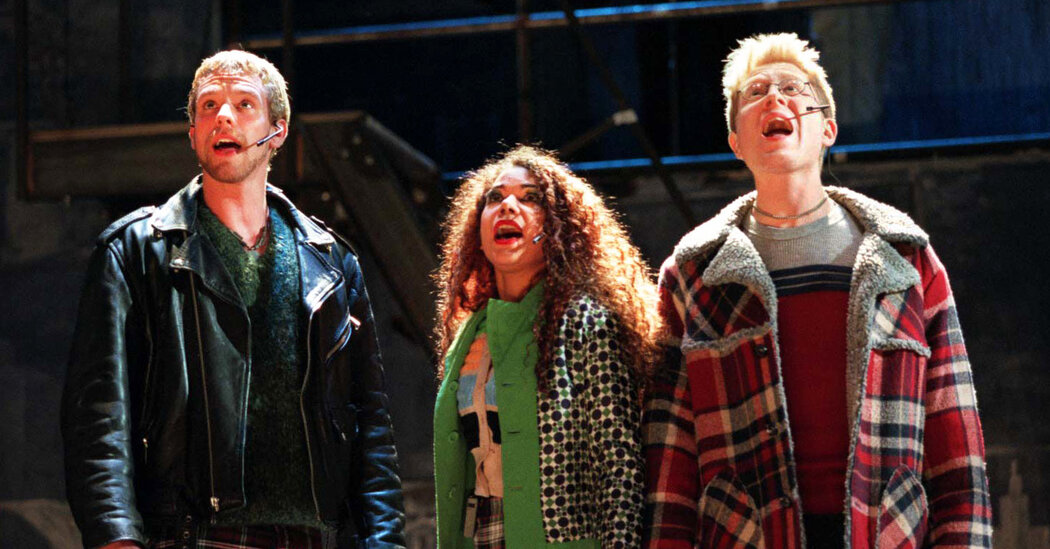 A pair of game-changing shows are celebrating big anniversaries, so now is a good time to revisit them and their legacies.

George C. Wolfe’s “The Colored Museum,” an anthology of sketches about Black culture (called exhibits), felt like a bolt of lighting when it premiered in 1986. At its heart, as Frank Rich said in his New York Times review, was the question “How do American Black men and women at evvel honor and escape the legacy of suffering that is the baggage of their past?” 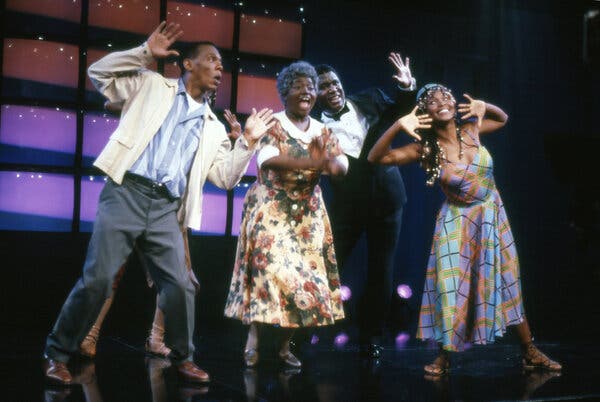 From left, Reggie Montgomery, Vickilyn Reynolds, Tommy Hollis and Suzzanne Douglas in the streaming production of “The Colored Museum,” filmed in 1991.Credit…Nancy Levine

Thanks to Crossroads Theater Company — where the show originated before moving to the Public Theater, and which is streaming the “Great Performances” capture from 1991 — we can confirm that while a few details have aged, “The Colored Museum” retains much of its satirical charge.

It’s fascinating, now, to see how playlets in the show — such as “Git on Board” (about welcoming guests on a “celebrity slaveship”) and “The Last Mama-on-the-Couch Play” (a blistering take on “A Raisin in the Sun” — have influenced contemporary works like Branden Jacobs-Jenkins’s “An Octoroon” and Jordan E. Cooper’s “Ain’t No Mo.’” Through Feb. 28; crossroadstheatrecompany.com

When Jonathan Larson’s “Rent” opened at New York Theater Workshop in 1996, its young, often queer and racially diverse characters felt new in musicals; it also dealt with the HIV/AIDS crisis, one of the biggest issues of the day. The show immediately found a passionate audience, won the Pulitzer Prize for Drama and transferred to Broadway, where it remained for over 12 years. Hindsight makes it clear that “Rent” has endured because a fairly conventional heart beats under its edgy demeanor, and that this “rock” musical is built out of zhuzhed-up show tunes; those are solid bones.

Catching up with British productions

The National Theater’s streaming arm, National Theater at Home, has just made available its acclaimed production of “Angels in America,” which stars Andrew Garfield, Nathan Lane and Denise Gough Some of us in the United States were lucky enough to see it when the production traveled from London to Broadway three years ago. Perhaps even more exciting, then, is the opportunity to discover older shows that didn’t come to New York, like “Antigone” starring Christopher Eccleston and Jodie Whittaker; “Medea,” with a pre-“I May Destroy You” Michaela Coel as the nurse; and Lucy Kirkwood’s “Mosquitoes,” in which Olivia Colman and Olivia Williams play sisters. ntathome.com

A good rule of thumb: Whenever the wonderful Andréa Burns (“In the Heights,” “On Your Feet!”) pops up in something, just check it out. In this case it’s Theresa Rebeck’s one-woman play “Bad Dates,” presented by the George Street Playhouse in New Jersey, which should provide good opportunities for Burns to flex her considerable comic muscles as a divorced woman looking for love. Feb. 23-March 14; georgestreetplayhouse.org

‘Letter to My Father’

In 1919, a 36-year-old Franz Kafka penned, but did not send, a long missive to his father, Hermann. The text (published in English as “Letter to His Father”) was an impassioned of indictment of a domestic tyrant, the now-grown son still possessed by fear, his wounds still fresh. The M-34 company, captures the live show with multiple cameras, offering various perspectives to the audience. The show is directed by James Rutherford, and performed by Michael Guagno. Feb. 19-March 28; m-34.org

Riz Ahmed in his solo show “The Long Goodbye.”Credit…Kelly Mason

The British actor Riz Ahmed, whose performance in “Sound of Metal” recently earned him a Golden Globe nomination, is also a rapper. A solo show expanding on themes explored on his album of the same name, “The Long Goodbye” was livestreamed in December and is now available on demand from the Brooklyn Academy of Music and the Manchester International Şenlik, which jointly commissioned it. Recording himself on a cellphone, the charismatic Ahmed prowls the empty Great American Music Hall in San Francisco while blending hip-hop and spoken word, autobiographical accounts and pointed insights. Through March 1; bam.org

Two of the most storied performers you could dream of seeing are appearing in a solo biographical shows they also wrote. First, Lillias White, a Tony Award winner for “The Life,” pays tribute to the jazz great Sarah Vaughan in “Divine Sass” (Feb. 18-20). Then André De Shields, who stole the show every night in “Hadestown,” portrays an abolitionist and social reformer in “Frederick Douglass: Mine Eyes Have Seen the Glory” (Feb. 26-28). Both will be presented on Flushing Town Hall’s virtual stage, flushingtownhall.org

One of the greatest actors of his generation, Wendell Pierce (“The Wire,” “Treme”) is fiercely committed to theater. In 2018, he starred in the James Anthony Tyler two-hander “Some Old Black Man” in New York; last fall, he quarantined in Ann Arbor, Mich., to participate in a virtual, fully staged version of that play for the University of Michigan’s University Musical Society. Pierce plays a middle-aged college professor who reconnects with his father (Charlie Robinson) as the two men confront their experiences with racism. March 1-12; ums.org

‘The Past Is the Past’

Manhattan Theater Club revisits some of its past productions in Curtain Call, a new reading series. Ron Cephas Jones — a captivating stage actor despite being most famous for the series “This Is Us” — and Jovan Adepo (“Watchmen”) lead Richard Wesley’s “The Past Is the Past.” The New York Times called the play “a poignant evocation of families and generations in conflict” when the company presented it in 1975, a year after its premiere at the Billie Holiday Theater in Brooklyn (Feb. 18-28). Head over to Manhattan Theater Club’s YouTube channel to watch the playwright John Patrick Shanley and Timothée Chalamet discuss the 2016 production of “Prodigal Son” — with generous excerpts from the show, which just predated Chalamet’s stardom. manhattantheatreclub.com