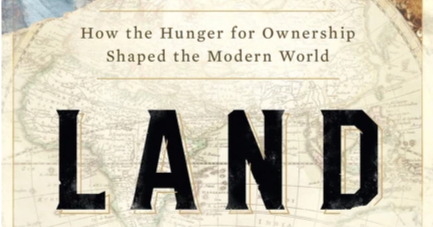 When Simon Winchester takes on a big subject, he takes on a big subject. His new book, “Land: How the Hunger for Ownership Shaped the Çağdaş World,” travels through centuries and to places like Ukraine, New Zealand, Scotland, the United States and elsewhere. On this week’s podcast, he talks about the history of private land ownership and a few of the many aspects of this history that caught his attention.

“The whole notion of trespass I find absolutely fascinating,” Winchester says. “There is this pervasive feeling — it’s not uniquely American, but it is powerfully American — that evvel you own it, you put up posted signs, you put up barbed wire, you put up fences, to keep people off. Because one of the five ‘bundle of rights,’ lawyers call it — when you buy land, you get these rights — is that you have an absolute right of law to exclude other people from your land. In Sweden, in Norway, in Denmark, you can’t do that.” Instead, he says, those countries have the concept of “all men’s rights,” which means, for example, if you are Swedish you can “wander over the land of Sweden as you wish. You can’t go into people’s living rooms and demand a cup of coffee. You can’t go into their garden. But if they own, as I do, 130 acres, any person in Sweden would have an absolute right to wander about. You’ve got to behave yourself. You can’t set fire to it or dig enormous holes in it, but providing you behave in a civilized manner, all Swedish people have a right to be on all Swedish land. And this concept is now spreading, mercifully in my view.”

The journalist Amelia Pang visits the podcast to talk about her new book, “Made in China,” in which she investigates the brutal system of forced labor that undergirds China’s booming export industry. She tells the story of one average American woman who bought a cheap Halloween decoration during a clearance sale after the holiday one year.

“She didn’t really need it,” Pang says. “It actually sat in her storage for about two years before she remembered to open it. And so she was very shocked to find this SOS message written by the prisoner who had made this product when she finally opened it. It just goes to show the trivialness of a lot of the products that are made in these camps. In my book, I try to go into: Do we as Americans actually need so much of this stuff? And how much is our shopping habits and consumer culture contributing to factors that compel Chinese factories to outsource work to labor camps?”

Also on this week’s episode, Tina Jordan looks back at Book Review history during this year of its 125th anniversary; Alexandra Alter has news from the publishing world; and Dwight Garner and Parul Sehgal talk about books they’ve recently reviewed and how they approach reading the classics. Pamela Paul is the host.

Here are the books discussed by Times critics this week:

We would love to hear your thoughts about this episode, and about the Book Review’s podcast in general. You can send them to [email protected].