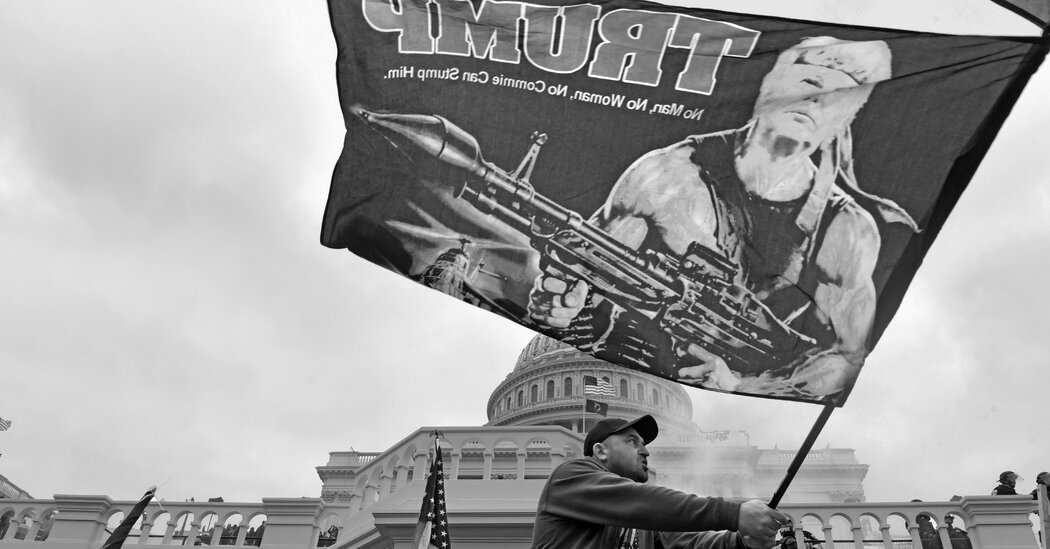 WASHINGTON — Every scene in “Lawrence of Arabia” is perfect, but there’s one I find especially haunting.

Peter O’Toole’s Lawrence returns to Cairo after successfully leading the Arabs in battle against the Ottoman Empire and tells a military superior that he does not want to go back. Slumping in his Bedouin robes, looking pained, he recalls that he executed an Arab with his pistol.

There was something about it he didn’t like, he says.

The irritated general tries to brush it off, assuming the erudite Lawrence is upset at killing a man.

“No, something else,” Lawrence explains. “I enjoyed it.”

The first time I realized that Donald Trump took pleasure in violence was back in March 2016. In an interview, I asked him about the brutish rhetoric and violence at his rallies and the way he goaded supporters to hate on journalists and rough up protesters. Even then Mitch McConnell was urging Trump to ratchet down the ferocity.

I told Trump that I had not seen this side of him before and that he was going down a very dark path. With his denigrating mockery of rivals and critics, he had already taken politics to a vulgar place, and now it was getting more dangerous.

Shouldn’t parents be able to bring children to rallies without worrying about obscenities, sucker punches, brawls and bullying, I wondered?

He brushed off the questions and blithely assessed the savage mood at his rallies: “Frankly, it adds a little excitement.”

A couple weeks later, I pressed him again on his belligerence and divisiveness, and, with utter candor, he explained why he was turning up the heat.

“I guess because of the fact that I immediately went to No. 1 and I said, why don’t I just keep the same thing going?” he said. “I’ve come this far in life. I’ve had great success. I’ve done it my way.” He added, “You know, there are a lot of people who say, ‘Don’t change.’”

And everything bloodcurdling that happened at the Capitol on Jan. 6 flowed from his bloodthirsty behavior. He had always been cruel and selfish, blowing things up and reveling in the chaos, gloating in the wreckage. But it was only during his campaign that he realized he had a nasty mob at his disposal. He had moved into a world that allowed him to exercise his malice in an extraordinary way, and he loved it.

He became his own Lee Atwater, doing the dirty stuff right out in the open. He embraced the worst part of his party, the most racist, violent cohort.

The faux-macho, Gotti-esque air of menace he cultivated as a real estate dealer, the Clint Eastwood squint, just seemed like performance arka; mostly he was around New York, acting genial at parties and courting the press. He would say stuff sometimes; after Sacha Baron Cohen pulled a prank on Ryan Seacrest at the Oscars, Trump said that Seacrest’s security guard should have “pummeled” and “punched” Baron Cohen “in the face so many times” that he’d end up in the hospital.

But evvel Trump got into politics, he realized, with growing intoxication, that the more incendiary he was, the more his fans would cheer. He found that he could really play with the emotions of the crowd, and that turned him on. Now he had the chance to command a mob, so his words could be linked to their actions.

Trump never cared about law and order or the cops. He was thrilled that he could unleash his mob on the Capitol and its guardians, with rioters smearing blood and feces and yelling Trump’s words and going after his targets — Nancy Pelosi and Mike Pence.

It was Manson family-chilling to watch the House impeachment managers’ görüntü with a rioter hunting for the House speaker, calling out: “Where are you, Nancy? We’re looking for you, Na-a-ncy. Oh, Na-a-ncy.”

It was like watching his vicious Twitter feed come alive. Others were chanting “Hang Mike Pence!” even as a gallows, complete with noose, was erected on the lawn. Watching those shivery videos, it hit home how Pelosi and Pence could have been killed and the melee could have turned into a far worse blood bath.

Trump not caring about the fate of his vice president was the inevitable sick end of the pairing of the Sociopath and the Sycophant.

As The Washington Post’s Josh Dawsey wrote in a tweet Friday, recapping his reporting with Ashley Parker: “Pence’s team does not agree with the Trump lawyer’s assessment that Trump was concerned about Pence’s safety. Trump didn’t call him that day — or for five days after that. No one else on Trump’s team called as Pence was evacuated to one room & another, with screaming mob nearby.”

Trump’s whole defense in the impeachment trial was like a low-budget movie trailer, cornier than the new Louise Linton flick. It was just another Trump flimflam reality TV show, meant to prove how he was wronged, not how he wronged the country.

Trump’s lawyers showed a görüntü of myriad Democrats using the word “fight,” as though that was the equivalent of what Trump did.

If he’d had better lawyers and a real strategy in the effort to purloin the election, or if a few brave Republicans like Brad Raffensperger, the Georgia secretary of state, had not stood up to him, he might have succeeded.

Certainly, opportunism has always run rampant in Congress. But most Republicans, who continue to tremble before Trump even though he devoured and destroyed their party, turning its traditional values upside down, are plumbing new cowardly depths. They are mini-Trumps, making decisions solely on self-interest.

CNN reported Friday night that Kevin McCarthy called Trump during the riot, telling him the mob was breaking his windows to get in. The then-president told him: “Well, Kevin, I guess these people are more upset about the election than you are.” The conversation ended in a shouting match. Yet McCarthy still voted against impeaching the president.

These dreadful Republicans are all Falstaffs, trampling the concept of honor, blowing it off as a mere airy-fairy word, not worth sacrificing anything for, not worth defending your country for. “Honor is a mere scutcheon,” Falstaff scoffed.

McConnell and the other craven Republicans realize now that they should not have played along with Trump as long as they did, while he undermined the election. But they still refuse to hold him accountable because he controls their voters.

The Democrats put on an excellent case, and they were right to impeach Trump. But if the Republicans won’t convict him, then bring on the criminal charges. Republicans say that’s how it should be done when someone is out of office, so let’s hope someone follows through on their suggestion.

A few days ago, prosecutors in Georgia opened an investigation into Trump’s efforts to overturn the election there. Manhattan District Attorney Cy Vance could drag Trump into court on tax and fraud charges. Karl Racine, the attorney general for D.C., has said that Trump could be charged for his role in inciting the riot.

Maybe a man who gloated as his crowds screamed “Lock her up!” will find that jurors reach a similar conclusion about him.