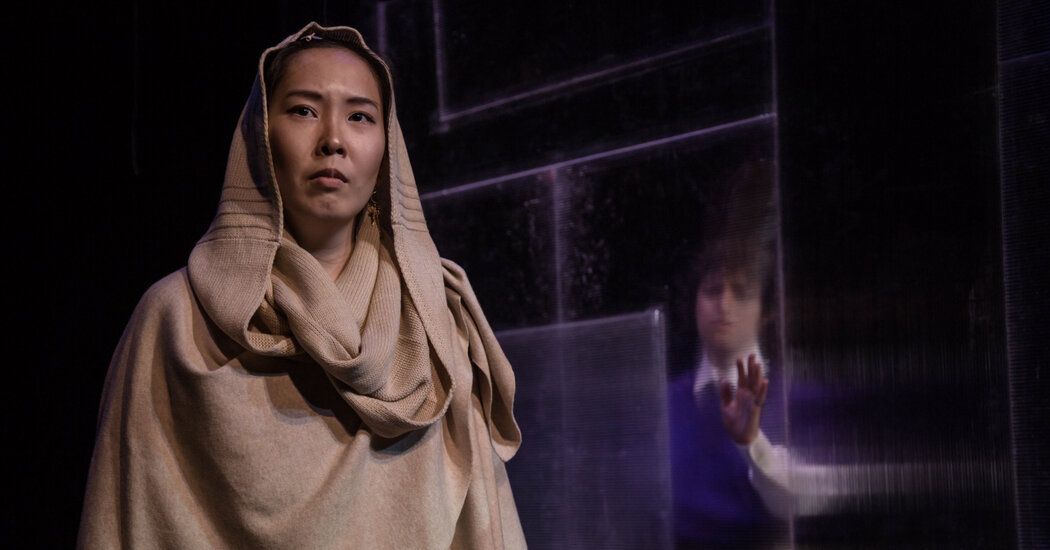 The sound of an actor’s footsteps on a stage. Remember that? The hollowness of it — wooden boards with just air underneath, one of a thousand sensations of theater that you don’t know you’ve missed until you hear it through your computer and your heart leaps, just a little.

The dicey thing about putting theater online is how easy it is to, accidentally, make it seem like something else: a panel discussion on Zoom, maybe, or a not-great görüntü. But Caridad Svich’s spare and immediate new drama, “The Book of Magdalene,” feels every inch a play, those footfalls included — even before a giant cicada puppet makes a fabulous cameo.

The fact that the performance is recorded rather than live feels right, in a way, because this is a story set in disconnected times, where touch is not allowed.

“Remind me again,” Len tells her friend Ru, one night near the river.

“About what they say it feels like,” Len says.

To touch another person, that is.

“My elder tells me stories sometimes,” Len adds, “but I don’t know if they’re true.”

Len (Jennifer Wang) and Ru (Mariam Albishah) speak from either side of a translucent divider: a pandemic practicality of Afsaneh Aayani’s clever set that also reads as a theatrical device. Similarly, the play itself is very much of the moment in its aura of limbo and longing, danger and constriction, yet it’s also more questing than that.

This is a rumination on morality and responsibility: what it means to take deva of one another, and to look after oneself. Len, who earns a living having phone sex under the name Magdalene — like the follower of Jesus Christ who has frequently been portrayed as a prostitute — is having trouble figuring that out.

The show is not a dour exercise, even if a sense of darkness pervades until the slightly too-sunny ending. The characters are neither humorless nor comfortless, and the camerawork (by Ricornel Productions) is smart. The design (lighting by Grey Starbird, sound by Janel J. Badrina, costumes by Victoria Nicolette Gist, projections by Alexander Schumann and Aayani) is impressive across the board. 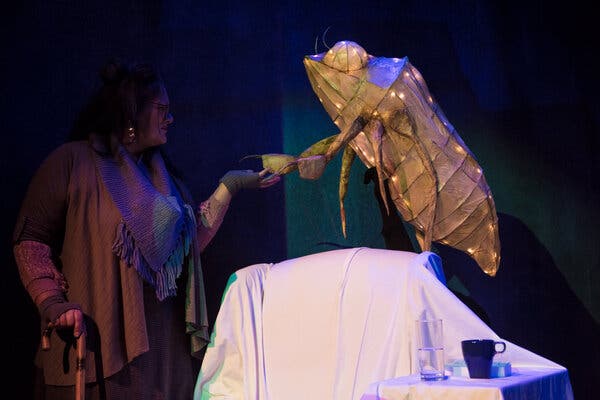 Also, there is the cicada (another Aayani creation), which appears to Len’s elder (a blithely funny Maria Schenck) in a dream — walking into the house and, Elder reports later, demanding a toddy.

“I let them do it themselves,” Elder says. “Cicadas don’t need me to tell them what to do in the kitchen.”

The Cherry Artists’ Collective in Ithaca, N.Y., doesn’t fare nearly as well with its staging of the Mexican playwright Alejandro Ricaño’s “Hotel Good Luck.” Translated by Jacqueline Bixler, it might have been apt pandemic fare: the story of a man (Seth Soulstein) trapped in an alternate reality where time doesn’t obey the usual rules.

Presented with the New Ohio Theater, it is performed live on a cluttered stage at the State Theater of Ithaca. There is no credited set designer, though there is a four-person “environment/properties team,” the environment consisting of disparate, static locales around the stage. Taking a filmic approach to the space, and using a green screen as a backdrop for dreams, it feels not at all like theater, though we can see that the performers (the other is Desmond Bratton) are in one.

A pared-back staging with the right actor in the lead might have tapped the play’s humor and navel-gazing humanity. This production fusses instead with digital tools, and meaning evaporates.

The Book of Magdalene
Through Feb. 21; mainstreettheater.com