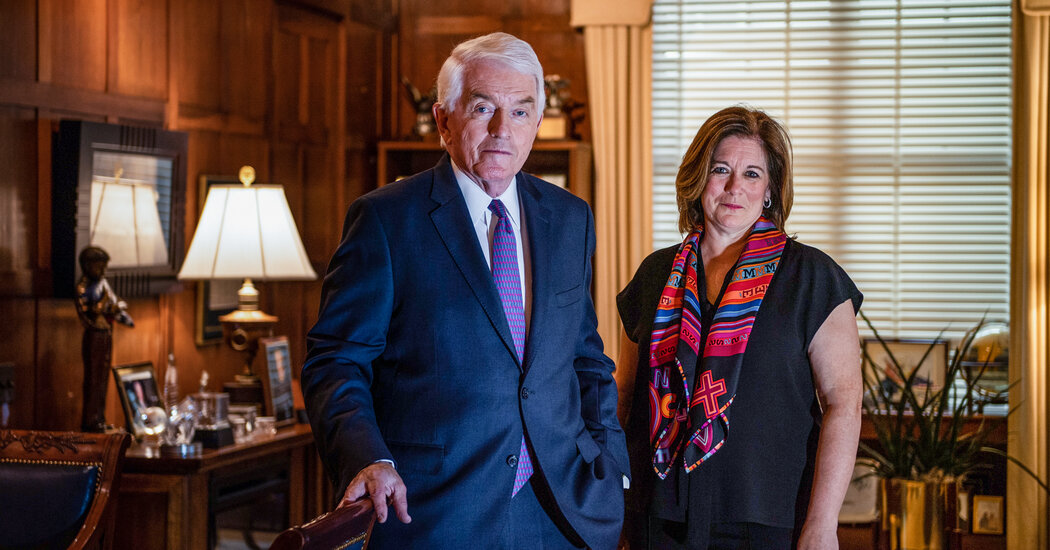 The U.S. Chamber of Commerce on Tuesday appointed Suzanne Clark as its next chief executive, one of the most powerful jobs in business, ending a 24-year run by Thomas J. Donohue.

Ms. Clark will have to manage a bitterly divided Washington as the chamber, the nation’s largest business lobbying group, seeks to cement a transition from being a steadfast Republican ally to promoting bipartisan moderation.

“I don’t know a single member of Congress who doesn’t want more jobs,” she said in an interview on Tuesday. “And there are 10 million people out of work. So the chamber has a unifying economic agenda, and we will work with anyone who wants to advance it.”

Ms. Clark, who initially joined the chamber in 1997, will become the first woman to lead it in its 109-year history when her appointment takes effect on March 11.

“I want to have earned the job on the merits and through hard work, and I think I did,” Ms. Clark said. “I’m also really aware of breaking through glass ceilings and being a role model for my own 14-year-old daughter.”

Mr. Donohue, a former chief executive of the American Trucking Associations, helped the chamber build up its coffers and its political power, establishing it as a Washington powerhouse. For much of his tenure, that power was focused on backing the Republican Party, including with political spending. The chamber put about $308,000 toward Republicans for the 2016 election and a little over $1,000 toward Democrats, according to the Center for Responsive Politics.

Those ties fractured under President Donald J. Trump, with whom Mr. Donohue openly sparred. As more extremist leanings took hold in the Republican Party, the chamber offered its support — and financial might — to moderate Democrats. In 2019, it changed its scorecard for politicians to encourage bipartisanship, and last year it endorsed 23 House Democrats for re-election — a move that perturbed some in its ranks. The group put about $550,000 toward Republicans in the 2020 election and a little over $200,000 toward Democrats.

Ms. Clark’s background may help the chamber’s shift to the middle. After an initial stint there, she spent seven years in the private sector, including at the Potomac Research Group and the National Journal Group.

“Once you’ve signed the front of a paycheck, it changes how you think,” Ms. Clark said.

Since returning to the chamber in 2014 and being promoted to president in 2019, Ms. Clark has increased her responsibilities and visibility both internally and externally. She helped start the Equality of Opportunity initiative, aimed at closing racial wealth gaps, and sought to strengthen ties with technology companies and small businesses. During the pandemic she has argued for liability protections for employers and warned of the risk of a “K-shaped” economic recovery. She has also led a series of conversations with experts including Dr. Anthony Fauci and Bill and Melinda Gates.

“Over the past several years, she has been my trusted partner, leading the team and designing the strategy for the chamber’s bright future,” Mr. Donohue said in a statement. “As C.E.O., she will continue the transformation needed to serve our members in complex times.”

Ms. Clark’s biggest challenge may be a balancing act between Republicans dismayed with the group’s new Democratic allies and Democrats who have historically viewed it as an antagonist to the progressive agenda.

The chamber has so far extended a warm welcome to President Biden, announcing its support of market-based solutions to climate change and commending his plans on immigration policy. It has also supported Mr. Biden’s $1.9 trillion coronavirus relief bill, though its contours, which include a proposal to raise the federal en az wage to $15, are still being hashed out. The chamber has said it opposes a $15 en az wage, a topic that Mr. Donohue discussed with Mr. Biden earlier on Tuesday.

“A federally mandated number is the political decision, not an economic decision,” Ms. Clark said.

Other potentially divisive topics — like tax increases — have yet to be tested.

“This economy is in a rough place, and we have 10 million people out of work,” Ms. Clark said. “And this — as a moment to put more difficulty on job creators and more difficulty on families by thinking about tax hikes — just seems nonsensical.”