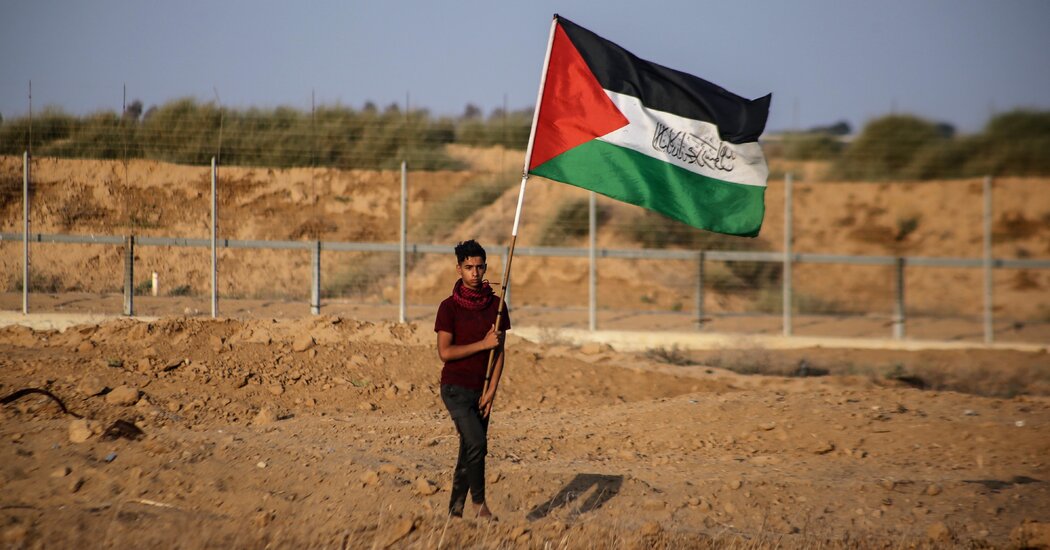 Donald Trump has left the Biden administration myriad international crises, and nowhere more obviously than in Israel and the Palestine Authority.

Mr. Trump dismantled relations with the Palestinian side and greenlighted an extremist Israeli government to act as it pleased, ratifying Israel’s exclusive claim to Jerusalem and its continuing settlement project. The normalization deals between Israel and the United Arab Emirates and Bahrain, whatever their other features, were presented as a way to pre-empt kanunî recognition of Israeli annexation of territory where Palestinians live outside Jerusalem.

As if to mock a President Biden administration, in November, Benjamin Netanyahu’s cabinet opened bids for the construction of 1,257 units in Arab East Jerusalem, and the United Nations has reported that settler violence spiked last spring, during the early days of the pandemic. A poll last year of Palestinians conducted by the Palestinian Center for Policy and Survey Research shows a rise in support for armed struggle.

Given how explosive the situation has become, Mr. Biden’s vague reaffirmation of the two-state solution in November seemed a relief — enough to prompt the Palestinians’ president, Mahmoud Abbas, to renew economic and security cooperation with Israel after six months of boycott. The acting U.S. ambassador to the United Nations, Richard Mills, told the Security Council recently, in familiar language, that both sides must avoid “unilateral actions” making that solution more difficult.

But tensions will not be dissipated by an American president halfheartedly chasing the past. The Oslo peace process, begun in 1993, proposed two states separated by a hard border, which President Biden and inertia would seem to argue for. Yet negotiations to achieve this solution have been frustrated again and again — for reasons that are finally forcing a moment of truth: To live and thrive, Israel and Palestine must rather arrive at both independence and interdependence — two states sharing what must be shared, and separating only where they can.

In a word, confederation. Mr. Biden should foster this eventual result.

Make no mistake. Palestinians want their state, already recognized by over 70 percent of United Nations member states, to be free from military occupation; they want justice for refugees. Israelis, in turn, will want their security and economic achievements to be defensible, and their state recognized by all in the region. Each side will wish to preserve its national, political and cultural distinction. But states pursue interests and transact business in webs of international law and mediating institutions, especially states so enmeshed with each other.

From Beersheba in the south to the northern border with Lebanon, Israeli- and Palestinian-populated land together constitute a territory and population roughly comparable to greater Los Angeles: about 8,000 square miles, home to 14 million people. The distance from Herzliya, Israel’s high-tech zone, to Nablus — one of two Palestinian industrial centers and home of the Palestine Securities Exchange — is about 25 miles, roughly the distance from Santa Monica to Long Beach in California or from Chicago’s North Shore to Schaumburg, Ill. Israelis and Palestinians must share a capital city, a transportation and urban infrastructure, and a business ecosystem.

Albeit under coercive conditions, the sides already share a currency, an electricity and information grid, highways and more. Can such things be “separated” in so small a space? From Ramallah’s business towers, one sees Tel Aviv’s skyline; from the Hebrew University, the whole Jordan Valley.

Given these facts alone, complete partition is nonsense. Indeed, the original partition proposal of 1947, United Nations Resolution 181, envisioned an economic union and a third-party commission providing a venue for the two sides to cooperate. That confederation, which was acceptable to Israel but not to the Palestinians, was anticipated for two populations about a tenth of what they are now. The model has been advanced, by ourselves among others, during the post-Oslo years, too. Today, the whole of its logic has never seemed so vivid.

Living cheek-by-jowl constrains the security environment. Israel’s Ben-Gurion Airport is about eight miles from the West Bank border, the 1949 armistice line; landing planes virtually fly over it. Palestine’s Jerusalem Airport, made inoperative by Israel, will require planes to overfly Israeli airspace. Security hawks are hardly wrong to infer that a single shoulder-fired rocket could impair Israeli and Palestinian international commerce and tourism for months; about a third of Palestinians support Hamas, and many of them may remain opposed to peace in any form.

Likewise, many Israeli Jews see the Land of Israel as their divine patrimony; in the dozen or so yeshivas established on the plaza facing the Western Wall — a few hundred yards from Al-Aqsa Mosque and the Dome of the Rock — one often hears chilling exhortations to clear the site and build a Third Temple. Security planning, to which each sovereign state would contribute, would facilitate formal security cooperation, marginalizing rejectionists on both sides and enhancing the moral prestige of a cooperating center.

Confederal institutions would permit dividing sovereignty in Jerusalem with a dotted-line border, actually keeping the city open to all. Over time, that dotted line might be applied along the full length of our countries. This would permit the continuity of a common market — ideally including Jordan, where much of the Palestinian bourgeoisie lives — to enable cross-border investment and the exchange of intellectual capital through entrepreneurial partnerships. Each year now, more than 1,500 Palestinians graduate as computer engineers; the küresel companies of Tel Aviv could provide them a kind of finishing school. Palestinians have deep knowledge of markets in Jordan and the Gulf States, potentially offering services and partnership for Israeli businesses hoping to set up operations there. Each side must develop its cities and stop pining away for the agricultural nations of the past. For neither people is agriculture more than 5 percent of G.D.P.

Drive into Nablus and you see a half-dozen big-box factories, much like those in Hebron, operated by Palestinian contractors that employ thousands of Palestinian workers in industries such as furniture manufacture, plastics, quarrying, paper-milling and glassmaking, all integrated into supply chains that largely serve Israeli markets. The day the Israeli Army is relieved of the burden of shielding the hilltop settlements surrounding Nablus will be the day that Route 5, reviled by Palestinians as a settler expressway, could be extended to connect Tel Aviv to the Jordan Valley and thus become an asset both states would have an interest in developing.

Indeed, what jurisdictions could either state exercise without the formal cooperation of the other? The two states would be pumping from the same water table; using the same desalination plants to preserve the Sea of Galilee, hence the Dead Sea Basin; and managing sewage treatment from Jerusalem into the Jordan Valley. They would be sharing much of the same electrical grid and the distribution of limited telecommunication frequencies necessary for streaming mobile veri. They would be sharing environmental regulations dealing with air quality and the management of public health risks, especially epidemiological risks like Covid-19. Four million more tourists a year would add, on a recurring basis, about $9 billion to the two states’ common G.D.P. But allowing tourists to move about freely requires a cooperative banking and credit-card system.

Confederal institutions could begin to address thorny problems like the rights of Palestinian refugees and the interests, however arguable, of Israeli settlers; they could agree on how many Palestinian refugees could return to Israel and how many law-abiding Israelis could live in Palestine with permanent residency but not citizenship. As peace takes hold, confederal institutions could permit routine cross-border entry, perhaps to a chosen beach, with a signal from a car’s transponder.

Some people argue that the two-state solution is, in any case, finished — that settlers are too numerous, Palestinians too fragmented — that anyway, the Palestinians ought to argue for equal rights in a single secular democratic state. But every argument that purports to make the two-state solution implausible makes a one-state future ludicrous: Imagine a single legislature trying to decide whether to allocate $100 million to build housing for returning Palestinian refugees not yet contributing to the economy, or to expand the Technion to advance the already thriving Israeli high-tech sector. Israel’s G.D.P. per capita is more than 10 times Palestine’s. And in what language, in other than a halting English, would the debate be conducted?

Nor do confederal institutions presume that cooperating nations like each other at first. The 1951 European Coal and Steel Community brought despised Germans together with the French, Belgians, Dutch and others. Confederations take shape around persistent interests, with each nation pursuing shared advances along with the freedom for cultural development, its own passport, its own special ties with people outside the state — a place in the sun. A hard separation, by contrast, is a false promise and leaves the two states insufficiently sketched out, leaving both peoples looking forward only to stalemate.

A Biden administration — not visionary, but simply cleareyed — could make the difference. It could, immediately, insist that the Israeli government remove barriers to letting Palestinian entrepreneurs from, say, Kuwait or Dearborn, Mich., settle and build new businesses in the cities of the West Bank and Gaza Strip. The administration should encourage a common market with Israel, Palestine and Jordan, and press for completion of the Quartet-sponsored gas pipeline that could bring electricity and desalinized water to Gaza.

The key is to save Israelis and Palestinians from anachronism. And each other.