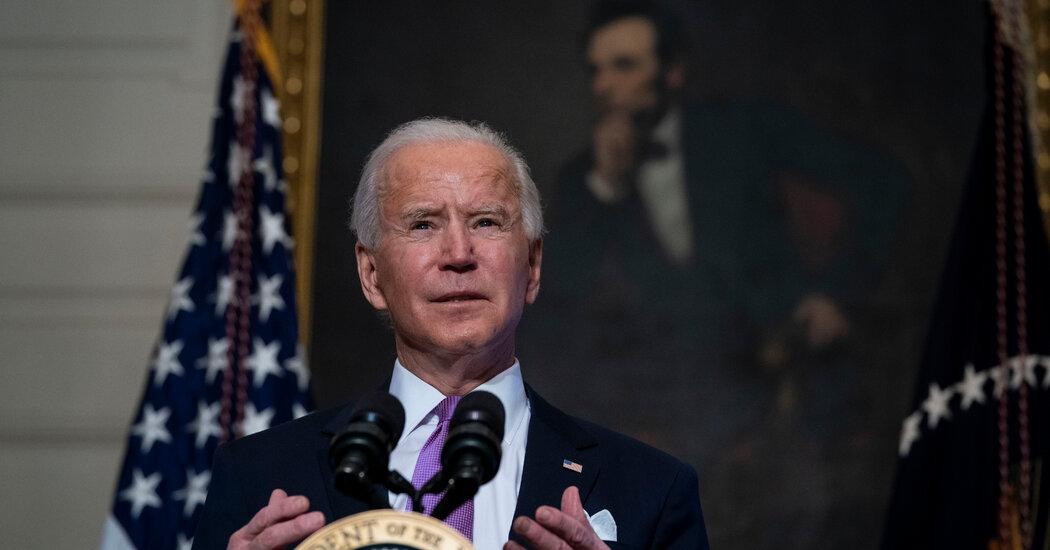 Bret Stephens: Good morning, Gail. Let’s not start with impeachment trial No. 2, if only because I’d rather not have to think about you-know-who from the start.

Over the weekend I read The Times’s distressing account of a new migrant crisis brewing at the border. Thousands of families on the Mexican side of the U.S.-Mexico border are betting that laxer rules coming from the Biden administration will make it easier for them to get to the United States and remain here. And tougher rules by the Mexican government make it more difficult for the U.S. to deport them back to Mexico. Throw in fears about further spread of the coronavirus, and it has the makings of the administration’s first self-made crisis.

You know that I’m a big supporter of comprehensive immigration ıslahat. But President Biden’s promise to take a more compassionate approach to migrants just seems primed to generate another humanitarian disaster, not to mention a political gift to the Trumpian right. Your thoughts?

Gail Collins: Bret, I’m in need of a little cheer. We’re not even halfway through pandemic February. Can’t we block out the border crisis and talk about … the Üstün Bowl? Really, times like these are why they invented sports.

Bret: The Harika Bowl left me too depressed for words. Let’s stick to happier topics, like the border crisis.

Gail: OK then. The border situation is a mess. It’s been a mess for ages. Obama struggled with it. Trump built his presidential candidacy around that Great Wall theory. Wall never got finished and he made everything worse.

Bret: Don’t tell anyone, but I’ve grown more sympathetic to the idea of a wall as part of an overall solution.

Gail: My lips are sealed. The answer is going to have to be a combination of a more efficient method of handling the cases of border applicants for admission, reforming enforcement so the American side isn’t stuffed with people who hate the immigrants. And then we’ve got the Dreamers …

Bret: Immediate citizenship for the Dreamers. A long but straightforward path to citizenship for those who are here already and have broken no laws besides being undocumented. A humane and generous policy with respect to political refugees. Well-regulated ports of entry. Strict enforcement of the law. The overall immigration solution seems pretty clear to me.

Gail: So far, not much argument here. Go on.

Bret: The sorun is politics. As with Newton’s third law of motion, every progressive action will have an equal and opposite Trumpian reaction. Which is why Biden needs to seize the middle ground here.

Gail: All I was hoping for in early Biden was a pledge to tackle the sorun and an infusion of new officials who had an attitude that was both sympathetic and realistic. We’ve gotten that. Much, much more to come.

Bret: Well, it’s definitely nicer to have arguments over policy than to worry together about the death of liberal democracy.

Gail: Mühlet, although by summertime we may have ground through so many policy arguments we’ll be wistfully recalling the time when all we had to do was yowl about Trump in total sync.

Bret: Speaking of policy, even Larry Summers is worried that Biden’s $1.9 trillion stimulus is, as they used to say about New York City rents, too damn high. It probably won’t surprise you that I agree with him. Do you see no risk in such a giant bill?

Gail: Summers sort of makes his reputation off disagreeing with liberal policy in a way that causes people to say, “Even Larry Summers …”

Bret: Noted. And largely off topic: Last month I took my filthy rental car through a carwash in Santa Fe, N.M., thus disproving Summers’s Law that “in the history of the world, no one has ever washed a rental car.” Sorry, go on.

Gail: But about the Biden plan. We’re in one of those economic holes that needs a big, big jolt to get things running well again. And the final program is very likely to be stripped of some of the big things you objected to, like the $15 asgarî wage.

Gail: And it appears that the Biden administration is open to capping the income level for receiving Covid relief.

Gail: Still, we’re close to an agreement and I’d think you’d be waving flags like all the poor football fans stuck alone in their living rooms Sunday night.

Bret: Hey, every day that I see a picture of the Oval Office and Donald Trump isn’t in it is a good day. Speaking of which, what do you make of the votes on Marjorie Taylor Greene and Liz Cheney? I’m guessing this might have been the first time the words “Yay, Cheney” crossed your mind.

Gail: True, so true. But hey, it’s a new generation. Yay, Cheney. Hope she continues to ignore the Republican House leaders’ request that she apologize for voting to impeach Trump.

Interesting how little anybody’s been talking about Trump’s trial this week, including us. Maybe the Harika Bowl got in the way, but I’m thinking the country is maybe just Done With Trump. Now there’s a good slogan for a T-shirt.

Bret: You’re looking too much on the bright side, Gail. The simple fact is that Trump is very likely to get away with inciting an insurrection against Congress and American democracy, thanks to the complicity of spineless and unprincipled Republicans. And to go back to your earlier point for a second, is there anything more disgusting than Kevin McCarthy asking Cheney to apologize for her vote to impeach?

Gail: I presume Cheney will survive this, one way or another. But what about Greene? Now that the Crazy Congresswoman has been stripped of her committees, I guess she’s free to wander around the country giving speeches, holding rallies. And what I’m wondering is whether, at some point, she’ll be joined by Trump, who has got to be itching to get back into the whipping-up-10,000-people business. 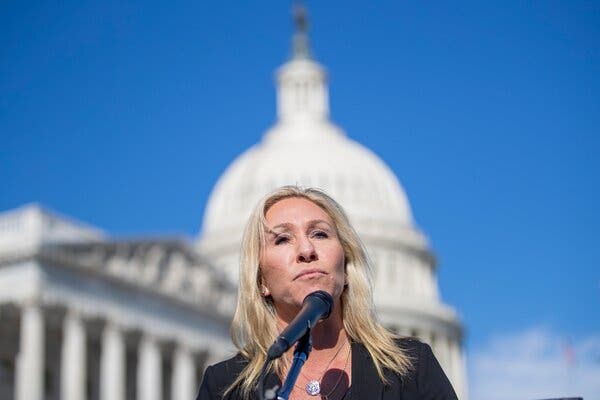 Marjorie Taylor Greene held a news conference the day she was stripped of her committee assignments by the House. Credit…Shawn Thew/EPA, via Shutterstock

Bret: The establishment conservative view is that last week was a big win for the G.O.P.: They beat back the Trumpy challenge to Cheney’s position in the House leadership, while getting Greene to renounce her craziest conspiracy theories. And there’s some polling that suggests that Republican support for a Trump 2024 run is on the wane.

But Greene hasn’t been chastened. She’s been emboldened. And Cheney has been censured by the Wyoming G.O.P. and is likely to face a primary challenge, as is every other Republican who’s tried to show independence from Trump. One of them is Senator Ben Sasse of Nebraska, who released a görüntü saying that “politics isn’t about the weird worship of one dude.” Good for him, but this sets the party up for a big civil war in the next few years. That’s good news for Democrats, provided the administration doesn’t stumble or give conservatives gifts like another border crisis.

In the meantime, and if you don’t mind me asking, have you gotten your shot?

Gail: Yeah, moving toward vaccination number two. How about you?

Gail: Pfizer. As we’ve noted, this is definitely the big conversation of the moment. Or at least the Üstün Bowl of current events.

Bret: As for me, I just checked the state’s guidelines and it looks like I’ll be eligible sometime in the summer. That’s as it should be, since I’m not in any of the obvious risk categories (although maybe someone should classify my political views as a medical disorder requiring priority care).

Gail: Only in Manhattan.

Bret: What bothers me is that my mom will only be getting her first shot next week, when she should have gotten it last month. And I still don’t understand why. Why the complicated categories? First responders first, then everyone born before 1960, preferably in drive-through facilities. The rollout here feels like it was conceived by Rube Goldberg and drawn by M.C. Escher.

Gail: I appreciate that you’re right, yet we’re kinda in a place where who-gets-first is secondary to how-we-get-this-stopped.

About 1.3 million people are getting a dose every day now, with more on some days, so let’s see how it goes and then revisit this conversation. Meanwhile, here’s a totally unrelated question for you. Bernie Sanders and Elizabeth Warren say Joe Biden should forgive most of the college student debt. What’s your thought?

Bret: I know this will shock you, but I’m totally opposed. As our colleague David Leonhardt noted a while back, it’s basically a giant giveaway to the upper middle class. What I’m really in favor of is getting more young people to explore alternatives to four-year colleges.

Bret: We should invest heavily in community colleges, encourage schools to move toward three-year B.A. programs, invest in national-service programs in the spirit of the Civilian Conservation Corps or the National Guard, urge private companies to create more apprenticeship programs, tell our kids to take a gap year or two, and get away from the idea that a college degree is a prerequisite for a good job or a “serious” career.

Gail: All good ideas, but there’s a long, long way to go before most kids have a really clear idea of what the non-college options are. So I wouldn’t want to take it out on all the kids who went into hock at the encouragement of both academia and the government. The Trump administration supported some terrible for-profit colleges that really robbed students with the promises of preparing them for lucrative careers.

Bret: The smartest person I know never went to college, and the dumbest are often the most credentialed.

OK, there’s my rant of the week. Let me know when you get that second shot so we can get together for an evening of wine, cheese and gossip.