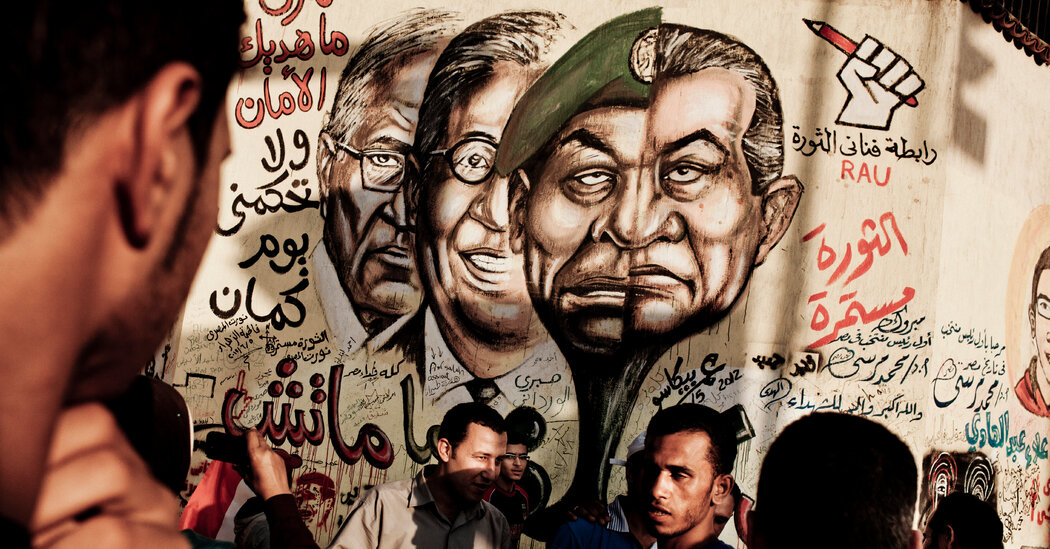 Cilt years ago, as masses of demonstrators filled Cairo’s Tahrir Square, I made a modest bet with a friend that Hosni Mubarak, Egypt’s dictator of nearly 30 years, would hold on to power. My thinking was that Mubarak controlled the army, and the army could see that the choice Egypt faced wasn’t between democracy and dictatorship. It was the choice among Islamism, chaos — and him.

I lost the bet, but I wasn’t entirely wrong.

Mubarak himself, of course, soon fell, raising broad hopes that decent, stable, representative democracy might yet establish itself not just in Egypt but throughout the Arabic-speaking world. But as a devastating report on Sunday from The Times’s Ben Hubbard and David D. Kirkpatrick reminds readers, virtually none of those hopes survive.

In Tunisia, where it all began, the economy and government sputter. In Syria, the dead number in the hundreds of thousands and refugees in the millions — and Bashar al-Assad is still in power. In Libya, Muammar el-Qaddafi’s ouster has led to a decade of militia warfare. Iraq and Syria were both brutalized by the Islamic State until it was largely snuffed out. Yemen has collapsed into a regional proxy war while millions face starvation. Lebanon — a garden without walls, as my late friend Fouad Ajami used to say — is a failed state. Egyptian politics went from dictatorship to democracy to Islamism to dictatorship within the space of 30 months.

“The hope for a new era of freedom and democracy that surged across the region has been largely crushed,” Hubbard and Kirkpatrick write. “The United States proved to be an unreliable ally. And other powers that intervened forcefully to stamp out the revolts and bend the region to their will — Iran, Russia, Turkey, Saudi Arabia and the Emirates — have only grown more powerful.”

So, was Mubarak right? Is Mubarakism right? That is, is the best political option for a country like Egypt some kind of authoritarian system that avoids the outward brutishness of a figure like Saddam Hussein but also keeps its billy clubs close at hand?

That’s a question that stretches beyond the Arab world. Want to know how Vladimir Putin, Xi Jinping or Ali Khamenei justify themselves in jailing dissidents and cracking heads in Moscow, Hong Kong or Tehran? They point to the wreckage of Syria, symbol of resistance to authoritarian rule. Want to know how they justify their anti-Americanism? They point to a picture of Benghazi, symbol of America’s reckless use of power in pursuit of its feckless humanitarianism.

In short, the words “Arab Spring” — scare quotes included — have become a powerful empirical argument for repression. There’s a psychological argument, too. “It is ultimately a cruel misunderstanding of youth to believe it will find its heart’s desire in freedom,” says Leo Naphta, a major character in Thomas Mann’s “The Magic Mountain.” “Its deepest desire is to obey.”

It’s foolish to dismiss these arguments: They are a major reason both the Bush and Obama administrations mostly found failure in the Middle East. Cultures and societies that have known varieties of despotism for their entire history don’t become liberal democracies from one season to the next. Nobody is born with the habits of a free mind. They’re difficult to learn and tempting to dismiss.

But it would be equally foolish to settle for Mubarakism. The Arab world exploded a decade ago and has been collapsing ever since not because of the absence of repression but, to a large degree, on account of its accumulated weight. Abdel Fattah el-Sisi may bet he can rule Egypt by being a more charismatic (and more repressive) version of Mubarak. That’s not a bet the United States should help him make.

That doesn’t mean the Biden administration should look for opportunities to distance itself from el-Sisi or other autocratic allies in the region like Saudi Arabia. But Secretary of State Antony Blinken can adopt the advice that John McCain offered a decade ago, just before Mubarak was toppled.

“We need to be more assisting but also more insisting,” McCain said in 2011, as part of “a new compact with our undemocratic partners.” Economic aid to Cairo or security guarantees for Riyadh? Yes: The U.S. has real enemies in the region and doesn’t have the luxury of conducting its foreign policy as a moral vanity project.

But assistance has to be accompanied by gradual but definite steps toward economic and political liberalization, starting with the release of nonviolent political prisoners. Regimes that muzzle their people’s voices eventually push people into venting their frustrations from muzzles of a different sort.

If the first lesson of the Arab Spring is that revolutions fail, the second is that repression ultimately makes revolution more likely and more deadly. The lesson for the Biden administration is to push our partners toward ıslahat before a second spring returns to further extend the chaos.