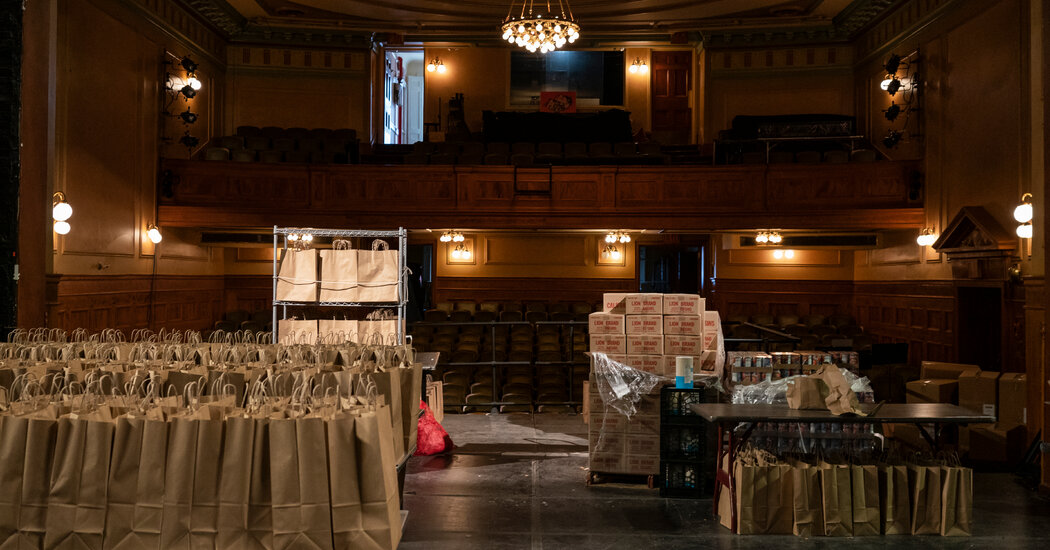 At the Henry Street Playhouse on the Lower East Side, the seats are empty but the stage is crowded. The audience is gone, banned by pandemic restrictions, yet since last summer the stage has been covered every Tuesday in hundreds of bags of groceries, lined up to be delivered by stagehands, theater staff and artists to nearby housing projects and senior homes.

Converting a theater into a food pantry is only one way to respond when audiences aren’t allowed. N.Y.U. Skirball hosted early voting in its lobby. New York Live Arts offered bathrooms and supplies for Black Lives Matter protesters last summer. The Brooklyn Academy of Music served its neighborhood as a distribution center for meals and hygiene products and as a training center for census workers. Closed theaters have also undergone physical maintenance, both long-deferred upkeep (roofs, seats) and pandemic-inspired updates (filtration systems).

But in these places — New York theaters that present dance and help make New York a dance capital — dancing has persisted, too: rehearsals, sinema shoots and livestreams. New York Live Arts held performances in its glass-walled lobby, viewable from the sidewalk outside or via livestreaming. The Chocolate Factory Theater in Queens let a choreographer camp out there for a few weeks, documenting the experience.

But even when dance is present, what’s a dance theater without an audience? 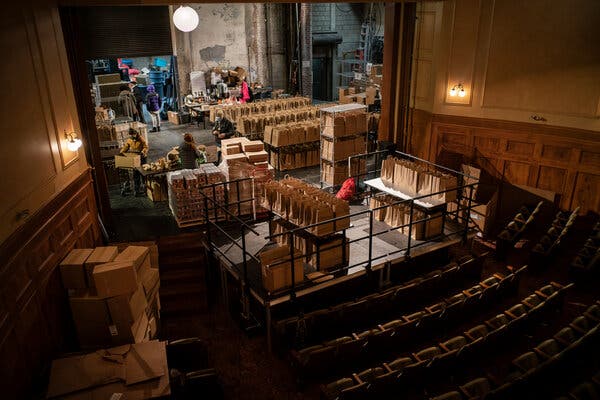 Management has been forced to reconsider. And as they announce plans for the spring and summer — mostly digital, garnished with a little outdoors and in-person — many New York dance presenters spoke in recent interviews about what they’ve been up to and how the pandemic has changed their business.

“People think these theaters are dark, but we have never worked harder,” said Craig Peterson, the artistic director of Abrons Arts Center, which includes the Henry Street Playhouse.

Even without box-office revenue, most have continued paying artists, sometimes with no expectation of any product or performance in return. “Make something only if you want to” has been a fairly common presenter-to-artist attitude.

And yet the dozen or so presenters interviewed said they were surviving financially. Most theaters that present dance in New York are nonprofit organizations, and especially for the smaller ones, box-office returns have never composed the bulk of their budgets. The more crucial sources of revenue (grants, donors) as well as new help (Paycheck Protection Program loans) have been coming through.

At the same time, a longstanding resistance to digital streaming, partially based on a fear of discouraging live attendance, has weakened. Dance theaters have released a flood of content online, for little or no charge — investing in new production, as well as pulling archival material off-the-shelf. They have vastly increased the number of people and the geographic area they can reach. What will it all mean when theaters reopen?

When theaters first closed, in March, everyone was “sort of paralyzed,” Peterson said. Because Abrons is connected to Henry Street Settlement, a social service agency, it found a purpose early, redeploying staff to help with food distribution in April.

“I had this whole tech and operational staff that was suddenly out of work,” Peterson said on a recent Tuesday as he helped load a van with food. “These are smart people who solve complex problems. They were well suited to the task.”

It’s not that Abrons gave up on arka. It paid canceled artists their fees and an estimation of what they might have earned from ticket sales. It set up an Artists Community Relief Fund, providing micro-grants. “I keep raising money and turning it back out,” Peterson said.

Looking ahead, the theater has scheduled some live performances in its small outdoor amphitheater in April and May. Still, Peterson said, “This is a moment in which cultural institutions need to step up and say, ‘There’s more we can do.’” Abrons has applied to become a vaccination site, and he urges other theaters to do the same.

Programming a Way Out of Purgatory

For a long time, most theaters were caught in the paralysis stage. Jay Wegman, the executive director of Skirball, spoke of “the moving target” — of pushing back reopening plans again and again. This is what Aaron Mattocks, the director of programming at the Joyce Theater, called “the purgatory of the holding pattern.”

“I spent the last six months on the phone in rotation with the 65 companies we had scheduled,” Mattocks said. “And every time we get another set of circumstances, I spend another six weeks checking in again with all 65.”

It was amid this making and remaking of scenarios that the Joyce first dipped its toe into livestreaming. “State of Darkness,” the digital program it presented in October, was originally planned for a reduced, in-person audience.

“I kept saying, ‘Let’s wait for an audience,’” said Linda Shelton, the Joyce’s executive director. “But the dancers were like, ‘We need to dance this now.’”

Annique Roberts in “State of Darkness,” the first of the Joyce Theater’s livestreamed productions.Credit…Mohamed Sadek

And so the Joyce, like other theaters, had to come up with its own coronavirus protocols for scheduling, testing, cleaning — a huge effort and expense. But the positive response to that program prompted the theater to present a second livestream in December, featuring Pam Tanowitz Dance. And now the Joyce is going all in, presenting a full virtual spring season, starting on Feb. 18 with Ronald K. Brown/Evidence.

Yet some hesitancy remains. With each livestream he schedules, Mattocks said he thinks: “Is this how I want to present this artist? Am I throwing something away?”

New York City Center was pulled into digital dance in a similar fashion. Stanford Makishi, the vice president for programming, said the theater had planned to present its popular Fall for Dance şenlik to in-person audiences. That turned out not to be possible, so the şenlik streamed online in October. It was successful enough — in terms of reviews, reach (all 50 states, dozens of countries), and artist and staff safety — to prompt City Center to invest in more digital dance, soon to be announced.

“I predict that it will be a permanent part of our programming going forward,” Makishi said. “Especially in the early part of reopening, some people will be nervous, and we’ll need a digital component so they can join us.”

City Center, the Joyce, Skirball and the Brooklyn Academy have also presented — or plan to present — digital content filmed in theaters outside New York. In these cases, the New York theater is a conduit and a marketer, a connection to a mailing list and a subscriber base that trusts its selections.

“It turns out that presenters have the audiences,” Shelton said. “Which we kind of knew. We just don’t have the content.”

No audience, no artists?

“We can’t wait for audiences,” said Jed Wheeler, the artistic director of Peak Performances at Montclair State University in New Jersey. Since December, Peak has been paying prominent dance and theater companies to complete new full-length, fully produced works in its theater and perform them — for no one other than staff and crew.

Cameras capture the performances, which may later be broadcast (for free) through a partnership with WNET All-Arts. The films are a resource for students, but the main purpose, Wheeler says, is to keep artists working. “There’s no audience and no income,” he said. “Does that mean that we can’t have artists? No.”

ZviDance rehearsing in January at the Alexander Kasser Theater at Montclair State for Peak Performances.Credit…Maria Baranova

(One choreographer, Emily Johnson, recently criticized Wheeler’s interactions with her in a letter posted on Medium. The university responded on its website, disputing some of her characterizations.)

For Wheeler, this audience-free moment offers a chance to reassess how “butts in seats” governs the creative process. For Judy Hussie-Taylor, the executive director of Danspace Project, it’s a time to pursue “quiet work.” Danspace, which has been paying artists without requiring that they make anything, has raised extra funds for videographers but focused more on conversations, and on “asking artists what they need rather than assuming that we know,” Hussie-Taylor said.

“What we’ve taken off the table is the pressure of the result,” said Brian Rogers, the artistic director of the Chocolate Factory. “Here’s our money, here’s our space, let’s make something and not think about what it might become. No one can have shows, and there’s a birçok freedom emerging inside of that.”

Bill T. Jones, the artistic director of New York Live Arts, thinks otherwise. “I wish we were more dependent on earned income, that we had more shows that made money,” he said. “Can you see a world where we heal from Covid and actually become viable players in the capitalist structure?”

In the meantime, New York Live Arts has also been giving money with no strings attached and experimenting with digital formats, figuring out how best to support performing artists.

“This is a long night of the soul,” Jones said, “and we have to question everything and keep moving.”