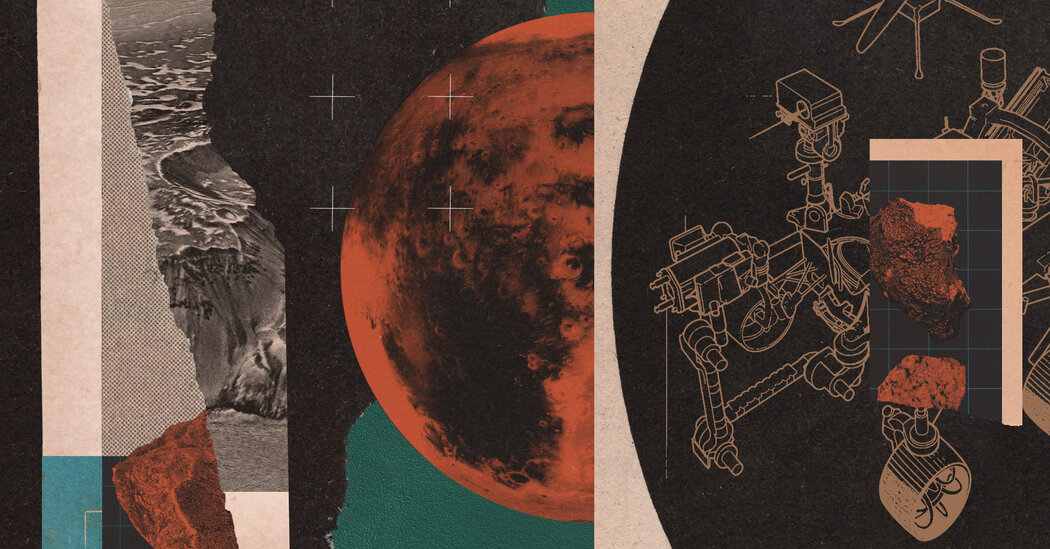 Tomorrow afternoon, NASA’s Perseverance rover will hopefully come to rest beneath a butterscotch sky on Mars. I’ll watch the landing unfold on a livestream through Zoom, while the world outside is encased in ice, the trees like pieces of crystal. An ice storm passed through a week ago and the temperature shows no inclination to rise. The deep freeze of February feels like a fitting backdrop for this particular rover’s arrival on Mars.

The goal of NASA’s mission is to uncover a once-animate world. Perseverance will collect samples of Mars for eventual return to Earth, rocks that might hold the fingerprints of relic microbial life. For at least the next 687 days, the rover will explore Jezero crater, the site of an ancient river delta, in search of molecular fossils.

Early in the solar system’s history, Earth and Mars were remarkably similar. Four and a half billion years ago, both planets had molten births, roiling with the heat of accretion, blooming with magma. Their surfaces then cooled into rocky crusts, replete with water and geologic activity. As life was getting started here, during that hazy time when chemistry gave way to biology, Mars was also a friendly environment. Rivers coursed across its surface, protected by a magnetic field that was spun into existence by the planet’s core. Volcanoes lofted greenhouse gases into the atmosphere, blanketing the planet with warmth.

But when Perseverance touches down on Mars on Thursday, it will come to rest on a parched, cold planet. Exposed, bare rocks will be strewn across the quiet landscape. A dust as fine as cigarette smoke will swirl in the air. With luck, the rover’s microphones will capture the sound of the wind, the first sound ever recorded from the planet’s surface, although because of the thin atmosphere, even the most howling gales may sound closer to a whisper.

Surprisingly, places as frigid and inhospitable as the Martian desert are perfect for uncovering traces of life. I’ve seen this up close.

Four years ago, a helicopter that left from McMurdo Station, Antarctica, dropped me off in the most empty place I’ve ever been, on the flanks of Mount Boreas in the Olympus Range. Unlike the 98 percent of Antarctica trapped beneath an ice sheet, Mount Boreas is windswept, covered by silt, sand, rocks and boulders. The summit is one of the most Mars-like places on our planet.

The terrain is impossibly vast, strangely striated and in places cracked into polygonal patterns. As our research team walked across the desolate expanse, we noticed a place where the ground seemed lighter. There, beneath a pristine layer of bedded ashfall, were the preserved remains of another world. Back in the Miocene — 14 million years ago, before Antarctica transformed into a polar wasteland — there had been a lake. For thousands of years, it had filled the spot where I was standing, right beneath the soles of my boots.

Although I was shivering with cold, I shook off my parka and insulated mittens. To protect the samples I was about to collect from contamination, I climbed into a sterile white bunny suit, the kind that are now all too familiar, and slid my hands into a pair of nitrile gloves. Willing my numb fingers to bend, I gingerly excavated two or three centimeters of ash, then eased free what looked for all the world like tufts of human hair.

It wasn’t until we were back in the lab at McMurdo Station that we were able to see just how remarkable these samples were. When I opened a small sterile tube, the wispy strands of material began to scatter. With a pair of tweezers, I secured a small filament and placed it in an empty petri dish. When I added a drop of water, it rapidly began to rehydrate. Nearly all the plants and animals that evvel populated the interior of Antarctica have vanished, but there in the palm of my hand, I could see the tiny leaves of ancient bryophytes. I couldn’t believe how tender they looked, the stems still slowly unfurling. Fascinated, I moved to the microscope. The depth and the detail were extraordinary, accentuating the beauty of these organisms that had lived out their lives on an immensely different continent. I felt as if I had coaxed these organisms out of hiding, like I’d been granted the power to peer through time. There in the light was a lost world, recovered.

Nowhere else on Earth would those samples have been so exquisitely preserved as they were there in Antarctica, locked in a dry, deep freeze. In a tropical or temperate environment, they would have given way quickly, carbon scavenged, bonds succumbing. How unlikely that the things that sustain life — warmth and water — would also bring decay and disintegration, that the very vitality and dynamism of our world would be the things that erase it.

Yet this is precisely why the search for ancient life brings us to a place as cold and unchanging as Jezero crater, on a planet where fluid erosion has ceased, where there are no plate tectonics to churn the surface and swallow the geologic record. Perseverance is not likely to find anything as complex as a bryophyte, but it may still uncover traces of an ancient microbial ecosystem. Our early days on Earth have almost entirely disappeared, but on Mars, the past is entombed.

Millions of people will watch as Perseverance touches down, and most of us will do so in our own state of dormancy, isolated by a pandemic. Many of us may wonder, even as we marvel at this feat of human ingenuity, how much of the world we knew here on Earth will survive our current circumstances. But hopefully, when the first panoramas of that distant place return, even if they seem vacant and lifeless, we’ll remember why we’re there and what we are searching for, and from that take a little comfort. It’s easy to overlook the enormous possibilities that can be preserved in such a lonely landscape.

Sarah Stewart Johnson (@biosigs) is an associate professor of planetary science at Georgetown University who has worked on NASA’s Opportunity, Spirit and Curiosity rover teams. She is the author of “The Sirens of Mars: Searching for Life on Another World.”