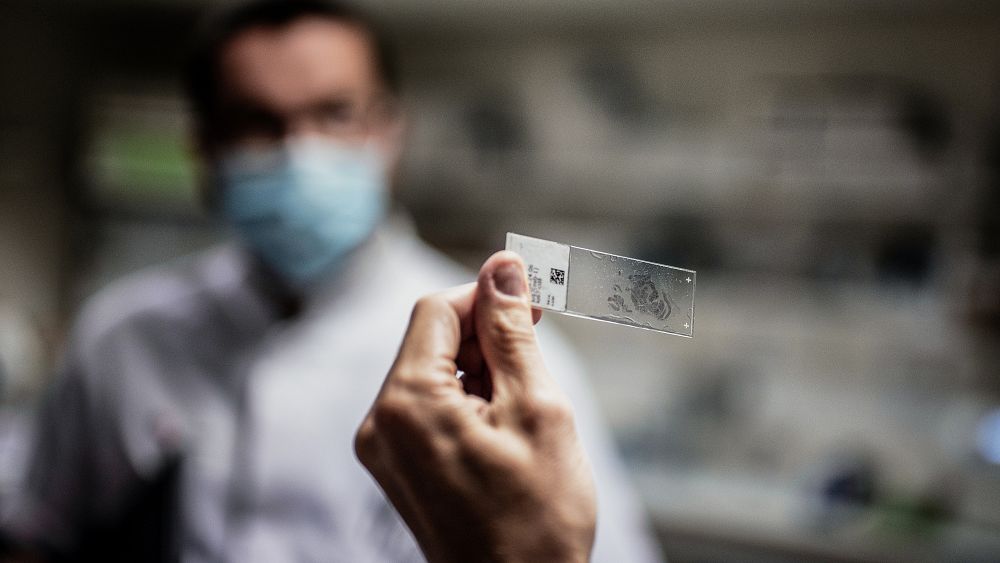 ‘I just wanted to be there for her, but COVID-19 prevented me’

When Deborah Whittingham visited her mum last summer to wish her a happy – yet socially distant – birthday, she had no idea this would be the last time she would see her healthy.

Jan Saxon turned 73 in June as England had begun easing its first lockdown.

She would be diagnosed with cancer just seven weeks later, and died another seven weeks after that, something Whittingham says was entirely preventable had it not been for the pandemic.

It’s no secret that cancer treatments have been severely disrupted by the outbreak of coronavirus, but as the world’s second leading cause of death (behind heart disease), cancer is perhaps one C-word that isn’t getting the spotlight it needs.

More than 19 million people were diagnosed with cancer globally in 2020, nearly three million of whom are in Europe.

Factoring in those already living with the disease and tallying it with World Health Organization (WHO) findings that COVID-19 has affected cancer care in 40% of countries it has surveyed, this means millions of patients have likely had their treatments affected.

It was utterly heartbreaking, devastating; I cannot describe how useless I felt.
Deborah Whittingham

Nine months before Jan’s birthday celebrations, in October 2019, the keen gardener had developed a cough. Initial hospital tests came back clear but she was referred for a routine check at a chest clinic just to make sure.

But that’s when COVID-19 began to take hold. Jan’s first two appointments for the clinic were cancelled, and two subsequent dates in March and April were unsuitable because they clashed with the timings her husband was due for his own treatment for bladder cancer.

“We were in lockdown and she was so terrified of my stepfather contracting COVID, or her contracting COVID, and so would not even ask me to help, or let me help,” Whittingham told Euronews. She added that private healthcare was out of the question because COVID rendered it unavailable. “We tried for both mum and my stepfather, but private hospitals had been put under the NHS umbrella. Consultants were not seeing private patients.”

Two telephone consultations and a trip to a hospital later, Jan had, by now, been wrongly diagnosed with chronic obstructive pulmonary disease (COPD) and asthma. A blood clot had also been discovered, so she was given a blood-thinning treatment and sent home.

“If they had discovered the cancer at this stage, it would have been treatable and the prognosis would have been positive,” said Whittingham. “They should have picked it up as early as February when the first appointment was cancelled.

“The outcome would have been very different and my mum would still be with us.”

On July 28, Jan was re-admitted to hospital, where an X-ray found a large tumour on her right lung. Further tests were carried out and she was given five rounds of radiotherapy to reduce the growth that had begun closing her throat and windpipe.

“I was only able to see her once when she was first admitted. Because of COVID, they would only allow one pre-booked visit per day and my stepfather needed to be there for her. It was utterly heartbreaking, devastating; I cannot describe how useless I felt.

“I hugged her for the first time since the start of COVID, having been prohibited by the pandemic rules. We clung onto each other and I held on to her, but I felt I had let her down. The measures to protect from COVID had denied my mum treatment and denied our family time together when she was battling for treatment; she was so terrified that if she caught COVID she would not survive.”

Whittingham said that at this stage, her mother had been told her cancer was treatable, but no longer curable; although, she still hoped and believed she would eventually recover.

“I cannot express how awful this situation was. I just wanted to be there for her, but COVID prevented this. Neither of my brothers were able to see her before she died. They hadn’t seen her since Christmas.”

Jan was discharged from hospital on September 11, by which time doctors had found the cancer had spread to her spine, adrenal glands, lymph nodes and bones. “I found her so frail and emaciated; she had the dark, sunken eyes of a very sick person. It was completely shocking.”

Four days later, Whittingham was able to visit her mother, where they agreed, together with her stepfather, that she would stay with them to help out. She went home that day to pack a bag and return the next morning — but her stepfather later called and said Jan had passed away in the night.

‘I delayed my chemotherapy over COVID-19 fears’

In April last year, Euronews reported on a study by scientists at University College London and the Health Data Research Hub for Cancer that predicted an extra 18,000 people could die from cancer in England alone due to treatments disrupted by COVID.

A more recent study carried out by a coalition of Cancer Patient Organisations across Europe found that in countries surveyed, 67% of screening programmes had been cancelled; urgent referrals for suspected cancers had dropped 59%, and the number of people seeking help for symptoms had also dropped 69%.

Meanwhile, cancer surgery cancellations have been reported at 44%, according to the European Society of Medical Oncology, which also said 10% of patients had missed at least one cycle of chemotherapy.

Vicki Meredew, a former educational and child psychologist, spoke to Euronews at the peak of the UK’s first lockdown in April after discovering her planned round of adjuvant chemotherapy for terminal brain cancer had been postponed.

The then 40-year-old said she was “a little worried” about her treatment starting up again as her hospital had already been “very stretched” before the pandemic.

Fast forward to February and Meredew has received her first dose of the COVID-19 vaccine, telling Euronews her local doctor’s office had offered her one that had been leftover. This means she will be able to restart chemotherapy later this month.

It hasn’t all been plain sailing, though. Meredew was diagnosed in 2018 with glioblastoma, an aggressive form of brain cancer that has a life expectancy of 12 to 15 months. In April, Meredew said her tumour was “surprisingly stable” but by Christmas a scan had shown “signs of progression”.

“I was due to restart chemo but I chose to put it off after an honest discussion with my oncologist because COVID rates were soaring,” she said, referring to winter outbreak. “Basically, I knew my chemo would have limited effectiveness and I knew lowering my immunity in the run-up to Christmas wasn’t a good idea because there was always going to be a COVID surge with the loosening of restrictions.

“Ultimately, I had to choose between postponing chemo or risking catching COVID.”

When asked whether it was a difficult decision to make, she added: “It was and it wasn’t. Once I’d decided to postpone chemo, it was a huge relief and I think going with my gut feeling was the right thing to do. My oncologist and specialist nurse were both very supportive, which was really helpful […]

“Ultimately, my tumour is terminal — there are no curative options but chemo might help slow progression, and fortunately my tumour isn’t growing as quickly as a glioblastoma usually would.

“Basically I’ve already outlived my prognosis so the fact that I’m still here and doing well is a huge positive.”

‘Travel bans have made getting specialist treatment a lot harder’

Laura Nuttall was 18 years old and newly-enrolled as an international relations student at King’s College London when she was also diagnosed with glioblastoma. Now 21, her mum Nicola says she is in a “watch and wait” mode, having scans every three months to see if/when the tumours return.

The family have been travelling every six weeks to Cologne in Germany, where Laura attends the IOZK clinic for immunotherapy treatment not available in the UK. Travelling to Germany, however, has become increasingly difficult with repeated travel bans — and while a capital finance company has previously lent the Nuttalls their private jet, Nicola said the next trip is now due and she doesn’t know how they are going to make it.

“I am concerned that if Laura does have a recurrence, I won’t be able to stay by her side through treatment. But more pressingly, my mum is also scheduled to have a tumour removed from her kidney on Monday and it really upsets me that we won’t be able to support her through her treatment as she is currently shielding and will need to continue to do so when she comes home from hospital.”

Nicola added: “Also to say that I do worry that if Laura was badly affected by coronavirus and needed to be ventilated in hospital and resources were stretched, they may take her diagnosis on board and ventilate another person rather than her because of the potentially short prognosis that glioblastoma has given her.

“This is deeply worrying to me but fortunately she had her vaccine yesterday, so that’s a nice positive.”

‘Make as much noise as you can’

The UK, like many countries in Europe, is prioritising those most vulnerable to the severe effects of COVID-19 for the vaccine. With roll-outs now ongoing, the hope is that hospital treatments will be able to work towards regaining some normality.

Plenty of advice for help in the meantime, however, has also been offered in abundance.

“Please make as much noise as you can,” said Whittingham. “Don’t be fobbed off and don’t assume they have your best interests at heart. If you have to scratch money together or crowdfund for a private consultation, do it. Time really matters.”

“Obviously, I realise that might be difficult at the moment, but a telephone consultation should be possible […]

“I suppose my best piece of advice is that it all seems very daunting but there is brilliant support available both from medical professionals and from charities. It really isn’t something anyone needs to face alone. There is a very active cancer community on social media who are very supportive, too.”

Expressing a similar sentiment, Nicola said: “There’s lots of help available in social media communities; it’s really good to have a supportive group who understand what you’re going through and can share information — even better if they have a sense of humour!

“Try to get some time outside every day during the lockdown and maybe create some kind of routine; Laura and I are working through a 30-day yoga challenge and lots of free audiobooks from the library.

“We’re also eating too much chocolate and watching lots of films!”