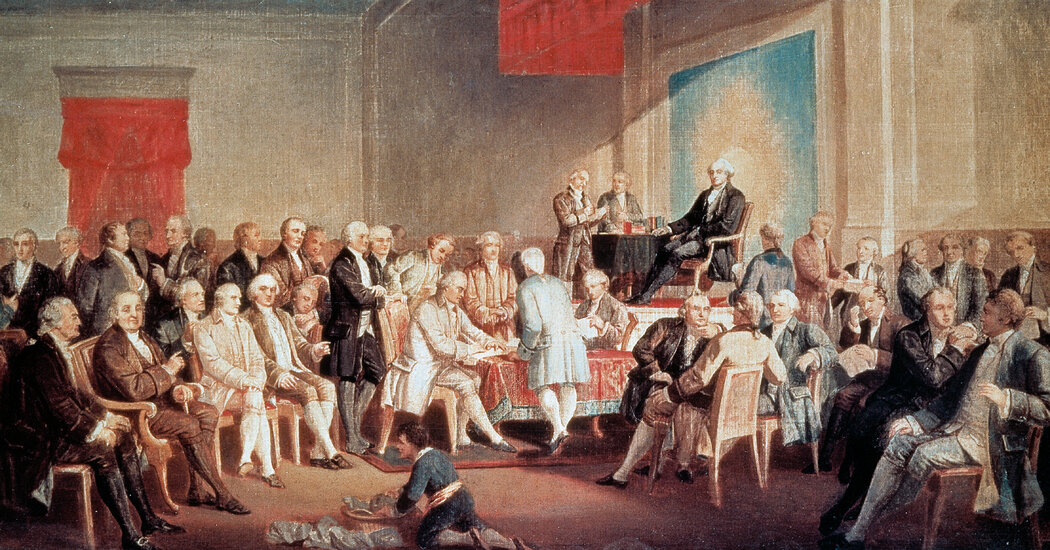 If the 55 delegates to the Constitutional Convention in 1787 were sitting today as jurors in the Senate impeachment trial of former President Donald Trump, one thing seems certain based on the historical record. Acting with vigor and dispatch, they would cast two near unanimous votes: first, to convict the president of an impeachable offense, and second, to disqualify him from holding future federal office.

They would vote in this way, unmoved by partisan passions or the defense’s claim that the Senate lacks jurisdiction, because they believed as a matter of civic principle that ethical leadership is the glue that holds a constitutional republic together. It was a principle they lived by and one they infused into every aspect of the Constitution they debated that summer in Philadelphia nearly 234 years ago.

As James Madison put it in Federalist No. 57, “The aim of every political constitution is, or ought to be, first to obtain for rulers men who possess most wisdom to discern, and most virtue to pursue, the common good of the society.”

In their speeches to the Constitutional Convention, delegates reiterated this point about a constitutional republic’s dependence on virtuous leadership almost every day of debates.

Benjamin Franklin highlighted the need to invest the government with “wise and good men.” James Wilson wanted “men of intelligence & uprightness.” Gouverneur Morris sought “the best, the most able, the most virtuous citizens.” And Madison spoke of “impartial umpires & Guardians of justice and general Good.”

They also left behind unequivocal statements describing the type of public personalities the constitutional republic must exclude from office. Through carefully designed systems and the power of impeachment, conviction and disqualification, those to be kept out of office included “corrupt & unworthy men,” “designing men” and “demagogues,” according to Elbridge Gerry.

Alexander Hamilton fought hard to endow the new government with checks and balances to preclude “men of little character,” those who “love power” and “demagogues.” George Mason devoted himself to devising “the most effectual means of checking and counteracting the aspiring views of dangerous and ambitious men.”

Franklin urged the other delegates to add protections in the Constitution to prevent “the bold and the violent, the men of strong passions and indefatigable activity in their selfish pursuits” from ascending to the presidential chair.

Referring to the presidency, Madison warned about the unique risk of “incapacity, negligence or perfidy of the chief Magistrate.” He went on to argue, “In the case of the Executive Magistracy, which was to be administered by a single man, loss of capacity or corruption was more within the compass of probable events, and either of them might be fatal to the Republic.”

Delegates were concerned with “the public good,” “the Natl. peace & harmony,” “the internal tranquillity of the States” and “the safety, liberty and happiness of the Community.” They intended for the president, as the commander in chief, to pacify civil hatred, resentment and insurrection, not to incite them to hold onto power.

They wrote the language of the impeachment powers with a demagogue like Mr. Trump in mind. As incisive political scientists steeped in history, they understood that demagogues are the singular poison that infects and kills republics and democracies.

As Hamilton warned in Federalist No. 1, these free forms of governments typically die at the hands of ambitious, unscrupulous orators who rise to power on “angry and malignant passions,” “avarice, personal animosity, party opposition” and “the bitterness of their invectives.” These dangerous politicians, Hamilton said, “have begun their career by paying an obsequious court to the people; commencing demagogues, and ending tyrants.”

To safeguard the American people from such politicians, the delegates empowered the House to impeach a president and the Senate both to remove him and to bar him from future office.

Mason was a strong advocate of the Constitution’s impeachment powers. On the seventh day of debates, he declared that “some mode of displacing an unfit magistrate” must be incorporated into the national charter for two crucial reasons. One was the “fallibility” of electors, or voters — that is, they might elect a demagogue — and the other, “the corruptibility of the man chosen.” In another speech, Mason said of the indispensable instrument of impeachment, “No point is of more importance,” and he asked, “Shall any man be above justice?”

What has happened to us today, to our ethics, to our standards of presidential decorum and leadership, to our fidelity to the Constitution and belief in justice, to our political courage and historical understanding of the dangers of demagogues to democracies, for there to be even a remote chance that the Senate, after the Jan. 6 attack on the Capitol, will acquit Mr. Trump, allowing him to run again in 2024?

The revolutionaries who took up arms against King George III were willing to break their bonds with the British Empire and die for the liberties and rights they would write into the Constitution. Today’s Republican senators must at least be willing to break with their party and disappoint some of their constituents — and, yes, perhaps lose their jobs in coming elections — to serve the larger interest of protecting the nation.

Those senators who vote to convict and disqualify Mr. Trump will be remembered, in the words of Madison, as “impartial umpires & Guardians of justice and general Good.” History will thank them for their integrity, wisdom and honor. They will be lauded, like those who helped create the nation, for the sacrifices they made.

Eli Merritt is a visiting scholar at Vanderbilt University, where he is researching the history and psychology of demagogues and writing a book about the American Revolution.